Besides "we're all doomed" 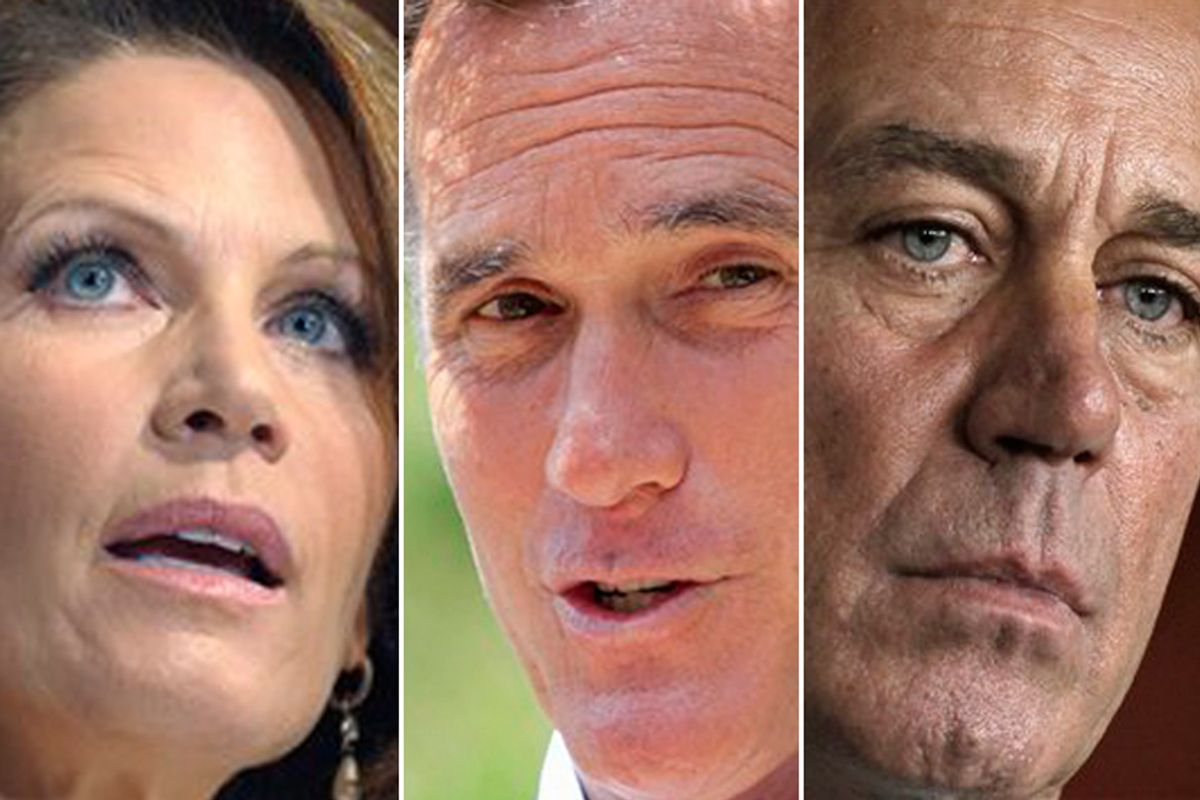 Everyone (by which I mean everyone who cares what Mitt Romney does) has been strongly criticizing the former Massachusetts governor for not ever coming up with a position on the debt ceiling and the related deficit reduction plans until the GOP and the White House reached a compromise, at which point Romney immediately said that he opposed it. But that is the point of running for president while no longer holding office! You can come up with any stupid position you want, but you also don't have to come up with any position at all until you figure out what the rubes want to hear. (He's still polling ahead of everyone else!)

"My plan would have produced a budget that was cut, capped and balanced -- not one that opens the door to higher taxes and puts defense cuts on the table," Romney, a former Massachusetts governor, said in a statement released by his campaign. "I personally cannot support this deal."

Yes, sure, that sounds good. It will do those good things Boehner kept saying before, but not the bad things that people dislike. If elected president, Mitt Romney will make tough decisions on pressing issues, a few hours after those issues are decided by others.

"The 'deal' he announced spends too much and doesn't cut enough," she said. "This isn’t the deal the American people 'preferred' either, Mr. President. Someone has to say no. I will."

Bachmann is against the compromise, of course, because "compromise" involves doing something Obama likes, and if Obama likes it it is socialism. But Bachmann is the only prominent 2012 candidate currently serving in Congress. (Sorry, Dr. Paul.) She actually could've had a say in this! As founder of the Tea Party caucus, she could've conceivably had a major say! But she never actually involved herself in the negotiations or bill-crafting or vote-whipping or anything at all, because she is too busy campaigning for president and having debilitating "girl headaches" with her gay husband. (Kidding!) She's missed 37 percent of House votes since launching her campaign, including the July 28 vote on Boehner's plan, which she skipped because she was busy giving a speech to the National Press Club.

If elected president, Michele Bachmann will obviously spend all of her time hanging out with her pals in the liberal media and no time doing anything.

There are other people, also running for president, and some of them also have opinions about this plan to avert an entirely self-inflicted crisis. Ron Paul is against the plan because he's Ron Paul, and the debt ceiling plan did not involve eliminating the Fed and returning America to the "wooden teeth standard." If elected president, America will once again lead the world in freedom-per-capita. (And probably tuberculosis.)

Newt Gingrich came out with a statement that managed to be long, detailed and completely meaningless. ("For instance, Strong America Now, led by Michael George, believes that $500 billion per year can be saved by applying Lean Six Sigma to the federal government.") Because he is Newt Gingrich. If elected president, Newt Gingrich will increase the national debt by trillions of dollars, most of which will be spent on beautiful diamonds and buying America lots of fake Twitter followers.

Herman Cain said ... nothing, about the debt ceiling compromise plan? He might not understand it. Or he might not care about problems he can't blame on Muslims? Jon Huntsman said the deal "is a positive step toward cutting our nation’s crippling debt." This means nothing because John Huntsman will never be president.

Tim Pawlenty took the most extreme-right line of any candidate so far (the cut-cap-and-balance plan did not cut, cap, and balance enough for him!) but no one noticed or cared. If elected president, America will quickly forget that we elected him. On Inauguration Day the presidential limo would forget to pick him up from the airport and the Supreme Court would just look at each other and shrug and decide to swear in Mitt Romney because we're all pretty sure we elected that one, right?