Are your genes somebody else's property?

A federal court ruled on Friday that companies could hold patents for human genes. Here's what the fuss is about 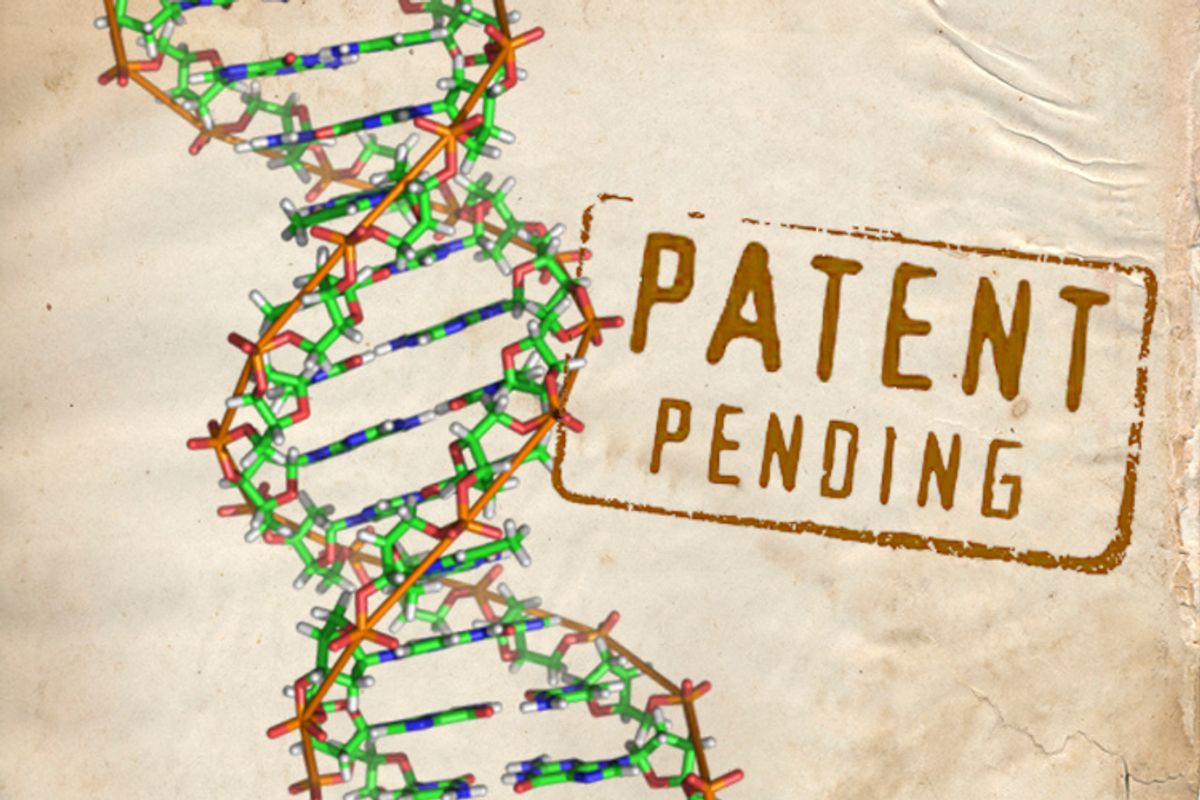 Can companies make you pay to look at your own genes? A federal appeals court ruling on Friday found that they could.

To be more specific, the court ruled that human genes, when isolated from their natural genetic housing (the chromosome), can be patented. The decision has been welcomed warmly by the biotech industry, which can now claim dominion over bits and pieces of our genetic blueprints. However, the ruling has been panned by critics who say it's unethical and counterproductive to label human genes as intellectual property.

The decision revolves around a company called Myriad Genetics, which holds the patents to two genes, BRCA1 and BRCA2, which are linked to the development of ovarian and breast cancers. Myriad  acquired the patents in question years ago, and markets a product called BRACAnalysis, which screens for predisposition to ovarian and breast cancer. The company charges $4,000 for the service. With the patents, it has the exclusive rights to isolate and analyze the two genes.

But is that right?

Let's start with the obvious: A patent is a legal tool used by the state to reward and encourage innovation. Anything from a mechanical widget to an industrial process to a pharmeceutical product can be patented, as long as it meets certain criteria. However, firmly established legal precedent prevents anyone from patenting natural phenomena. After all, logic would seem to dictate that something that occurs in nature is categorically not an invention, and thus should not be eligible for patents. Therefore, scientists who work with the human genome cannot patent large swaths of our genetic sequences, even if they can protect certain processes for mapping them.

But the argument gets more complicated when we talk about individual genes. The sequences of DNA that become our genes are contained in the 46 chromosomes that make up the human genome. Extracting, or "isolating" singular genes is a complex, labor- and resource-intensive process. (That process, by the way, is absolutely eligible for patents.) The U.S. Patent Office has been issuing patents for genes for years. More than 4,000 currently exist. And isolated genes are considered "the cornerstone of the biotechnology industry."

Those who hold gene patents claim that the process of isolating them makes them materially different from their original forms, and thus, inventions. Critics argue that a gene is basically the same, whether it's in a chromosome or in a petri dish. Both sides, meanwhile, argue that theirs is the best way for fostering innovation. Patent holders believe the system is necessary to incentivize a complex and costly process. And detractors believe that the legal tool is simply a way to stymie competition.

Which brings us to Friday's decision.

In 2009, a group that included doctors, scientists and the ACLU challenged Myriad's gene patents in court. They argued that the company -- by monopolizing the BRCA genes -- was restricting the ability of patients to receive timely and affordable medical care -- and without a sound legal argument. In particular, the complainants argued that:

Because of the patents and because Myriad chooses not to license the patents broadly, woman who fear they may be at an increased risk of breast and/or ovarian cancer are barred from having anyone look at their BRCA1 and BRCA 2 genes or interpret them except for the patent holder.

As the Atlantic's Andrew Cohen notes:

The central question of the case, then and now, was whether "isolated" human genes are unpatentable "products of nature" or patentable as "markedly different" compositions from their "unisolated" counterparts.

A U.S. District Court ruled against Myriad last year, arguing that "DNA's existence in an 'isolated' form alters neither [the] fundamental quality of DNA as it exists in the body nor the information it encodes." The Justice Department likewise argued that genes are not patentable. The two judges who overturned that decision disagreed, claiming that "isolated" genes do not occur in nature, and that they necessarily have to be extracted in a lab.

On the one hand it is obviously true that singular bits of our DNA do not simply spring into existence independent of their larger genetic framework. But a number of outspoken critics believe this to be a semantic argument only. TechDirt's Mike Masnick, for example, presents a telling analogy: "Basically, [the judges] seem to be arguing that because a severed finger is not attached to a hand, the finger is not naturally occurring." This was a sentiment also sounded by the lone dissenting opinion in Friday's decision, Judge William Bryson.

In summing up the issue, Forbes' Steven Salzberg, a longtime critic of gene patents, has this to say:

Scientifically, it shouldn’t matter how the judges define "isolated" DNA. And as two federal judges have now ruled, genes are not inventions, full stop. What's more, gene patents slow down science by throwing legal barriers in the path of anyone who wants to work on those genes.

The ruling touches on a particular sensitive area of intellectual property law. For all the furor over the copyright infringement encouraged and enabled by the Internet in recent years, patent enforcement arguably has a much larger impact on the direction of the U.S. economy. The Myriad case will likely be heard by the appeals court again, in front of the entire bench of judges, rather than just a panel of three. And, as Popular Science notes, "the lack of clarity, and the complex and controversial nature of the case, makes a hearing by the [Supreme Court] seem likely."