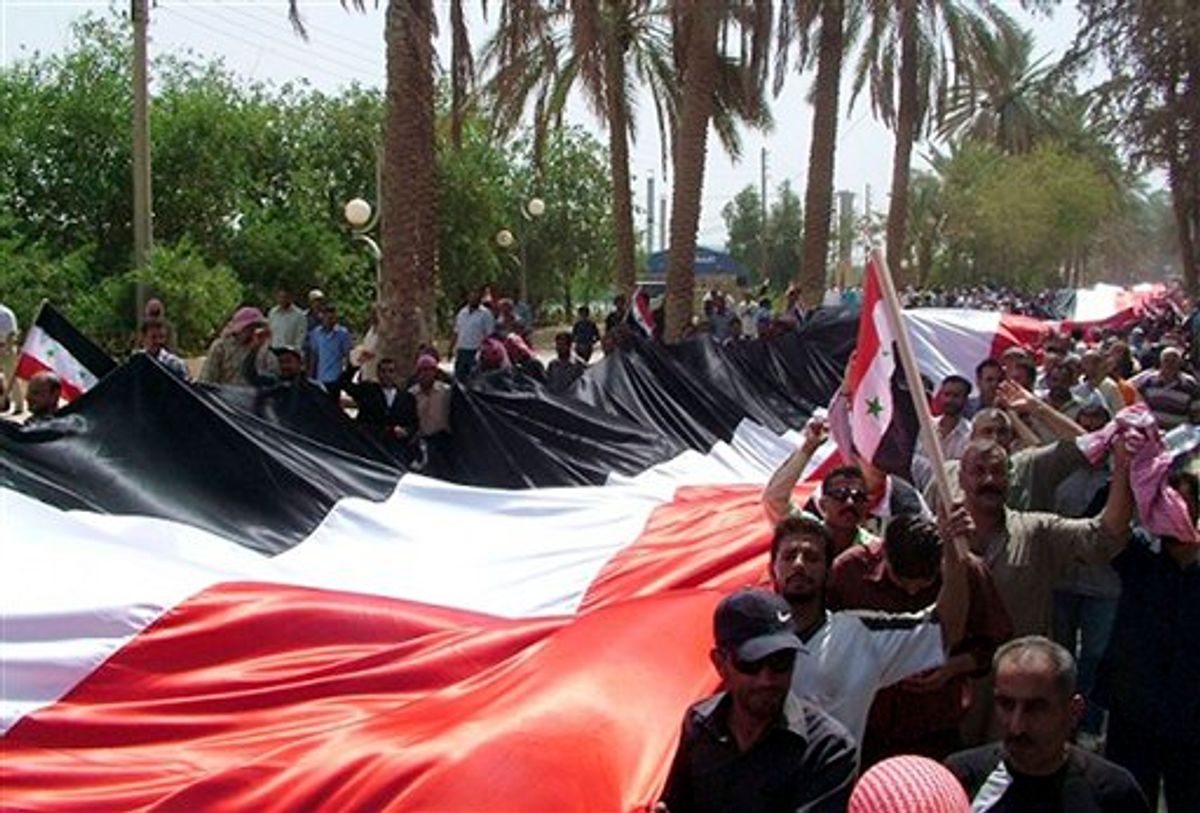 In this photo released by the Syrian official news agency SANA, Syrian pro-government supporters carry a giant national flag during a rally in the eastern province of Deir el-Zour, Syria, Thursday, July 28, 2011. A global campaigning organization said Thursday that one person disappears in Syria every hour and that almost 3,000 people have gone missing since the start of the uprising against President Bashar Assad more than four months ago. The online activist group Avaaz.org said its investigation has identified 2,918 Syrians who were arrested or abducted by force by security troops and whose whereabouts are now unknown. (AP Photo/SANA) EDITORIAL USE ONLY (AP)
--

Syrian troops advanced in the central city of Hama on Tuesday, taking up new positions in a residential area a day after government forces killed 24 people throughout the country on the first day of the Muslim holy month of Ramadan, activists said.

The London-based Syrian Observatory for Human Rights said most of Monday's deaths were in Hama, which has been the target of a heavy military operation since Sunday.

The bloodshed brought a fresh wave of international pressure as Italy recalled its ambassador to Damascus on Tuesday, citing "horrible repression" of citizens.

The top U.S. military officer said Washington wants to pressure the Syrian regime politically and diplomatically. But when asked about the prospect of U.S. involvement in Syria, Joint Chiefs chairman Adm. Mike Mullen said "there's no indication whatsoever that the Americans, that we would get involved directly with respect to this."

The current crackdown appears aimed at preventing protests from swelling during Ramadan, when Muslims throng mosques for the special nightly prayers after breaking their dawn-to-dusk fast. The gatherings could then turn into large protests throughout the country.

About 1,700 civilians have been killed since the largely peaceful protests against President Bashar Assad's regime began in mid-March, according to tallies by activists.

There were minor discrepancies in Monday's death tolls cited by activists, ranging from 19 to 25. The difference could not immediately be reconciled.

The regime disputes the toll and blames a foreign conspiracy for the unrest, saying gangs and religious extremists -- not true reform-seekers -- are behind it. State-run TV aired video footage Tuesday purportedly filmed in Hama showing men carrying rifles in the streets of the city -- an attempt to bolster their claims that thugs are driving the violence.

Syria has banned independent media coverage and has prevented most foreign journalists from entering the country, making it difficult to verify events on the ground.

Hama-based activist Omar Hamawi told The Associated Press that troops advanced about 700 yards (meters) from the western entrance of the city overnight, taking up positions near homes and buildings in an area known as Kazo Square.

He said the force consisted of eight tanks and several armored personnel carriers.

Hamawi, who spoke to the AP over the telephone, added that troops were also reinforced on the eastern side of the city around the Hama Central Prison, an overcrowded jail.

He said residents there saw smoke billowing from the prison overnight and heard sporadic gunfire from inside the premises, leading some to believe that the inmates were rioting. He added that it was impossible to know what was exactly going on in the prison or whether there were casualties inside the tightly controlled facility.

The activist also said that parts of Hama were hit Tuesday morning with heavy machine gun fire after sporadic shelling overnight. He said a shell hit a compound known as the Palace of Justice in the city center, causing a huge fire that burned much of the building, which is home to several courts.

The Syrian Observatory said on Tuesday that Monday's death toll included 10 people in Hama, six in the Damascus suburb of Arbeen and three in the central province of Homs. Two were killed in the eastern town of al-Boukamal, two the coastal city of Latakia and one in Maadamiyah near Damascus, the group said.

Hama has a history of defiance to the Assad family 40-year dynasty in Syria.

In 1982, Assad's father, Hafez Assad, ordered the military to quell a rebellion by Syrian members of the conservative Muslim Brotherhood movement. The city was sealed off and bombs dropped from above smashed swaths of the city and killed between 10,000 and 25,000 people, rights groups say.

The real number may never be known. Then, as now, reporters were not allowed to reach the area.

AP writer Rebecca Santana in Baghdad contributed to this report.