Would President Hillary be a stronger leader than President Obama?

Some liberals with buyer's remorse are questioning their 2008 choice. Here's why they shouldn't 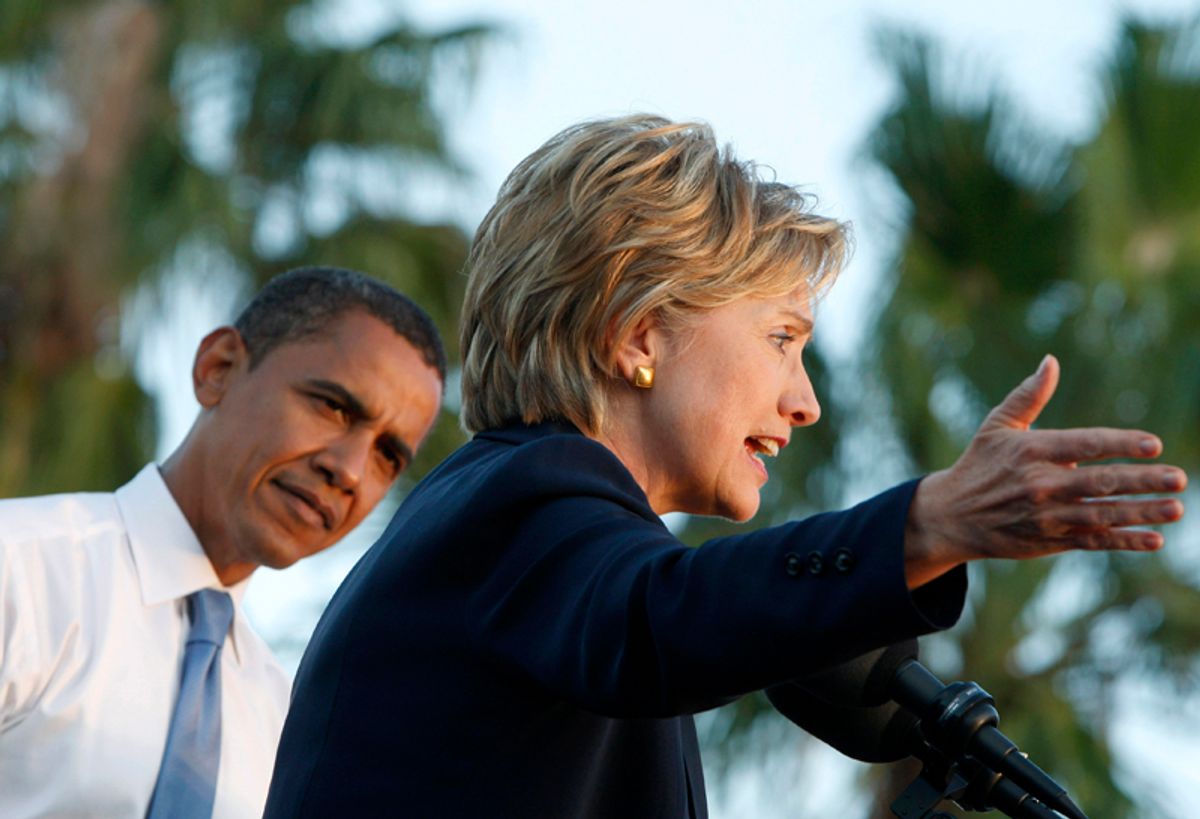 As liberals rail against the debt limit deal and Barack Obama’s choices leading up to what they see as an epic capitulation, it seems fair to wonder if a different president -- someone with, say, a reputation for toughness and savvy and with a history of combating Republican obstructionists -- could have produced a better outcome. Someone like, oh, I don't know ... Hillary Clinton?

That, after all, was the premise of Clinton's Democratic primary campaign in 2008 -- that Obama might be able to inspire the masses, but that only she had the experience and know-how to get results. And now here's Obama seemingly validating it -- and hardly for the first time in his presidency. Can we now safely say that Democrats made the wrong choice three years ago?

The short answer is: No. Believe it or not, the best evidence is that if Clinton were now the president -- or, for that matter, if any other mainstream Democrat were -- the differences would be very small.

To begin at the beginning: Presidents' personal preferences are important, but they are only one of the factors in determining what a president does in any situation. Personal presidential preferences are constrained in lots of ways. First, there's the political context, including the strength of the parties in Congress. That, of course, almost completely explains the differences between legislative outcomes this year compared to 2009-2010. It’s not that the president "tilted" right; it's just that the same exact president, with the same exact preferences, will get very different results when Congress shifts dramatically.

Second, the president is constrained by his party. As the political scientist Richard Skinner has argued, presidents over the last thirty years have become increasingly creatures of their parties. Presidents are very responsive to party preferences, in part because their administrations are generally filled with party actors, rather than (as was the case in earlier eras) people personally loyal to the president.

Presidents are also constrained, at least to some extent, by commitments they made during the campaign. Those commitments may be substantive, or they might be symbolic.

And presidents are constrained, of course, by events. Obama surely would not have started his presidency by pushing for a large economic stimulus bill if the economy had been thriving; indeed, responding to the economic crisis (including possible stimulus, TARP management, the auto industry crisis) would have moved to the top of the agenda of any president.

Of all of these constraints, the only one that would have been even somewhat different for a President Hillary Clinton than it has been for President Barack Obama has to do with their symbolic commitments during the campaign. I’ll take that up in a bit, but I’d first emphasize how little scope there is for those differences to matter; in many ways, Clinton and Obama would be identical presidents.

Now, for the differences. Sometimes, it really does matter who the president is. The president’s personal policy preferences might matter. His or her skills at handling the presidency can make a difference. And, yes, personality can affect outcomes.

Unfortunately, at this point everything gets very speculative. How good a poker player is Obama? How good would Clinton be? There’s no way of knowing. Similarly, while it would be a real mistake to say that personality can’t matter, that’s a long way from being able to say that personality does matter…in this particular way, in this particular instance. Nor do we have access to what Obama (or Clinton for that matter) “really” thinks about issues. We can only infer – guess – from hints we get when presidential actions or statements don’t seem to square with the incentives and constraints that we can observe.

That’s a tricky game, however. Take, as an important example, Obama’s apparent commitment to long-term fiscal conservatism. I think there’s a good case to be made that faced with Republican rhetorical insistence on spending cuts, tax cuts, and deficit reduction, Obama had some leeway in choosing how to fight back, and his choice was to push for a Democratic version of deficit reduction; it’s also true that Obama emphasized "responsible" budgeting during the healthcare fight, perhaps over other goals. But was that really a personal choice? One could just as easily argue that the Democratic Party has been strongly in favor of fiscal conservativism since 1982, or perhaps since the Carter administration. If that’s the case, and I think it is, then Obama is basically just doing what Clinton or most other Democrats would do.

When it comes to personality, I’ll return to the campaign commitments mentioned above, which many see as driven by personality: Obama emphasized conciliation and cooperation, while Clinton talked about fighting spirit and partisanship. Would that have mattered in the debt limit negotiations? Perhaps, but the effects are uncertain. No question that Clinton would have been wary from the start of any chance for agreement. But how does that actually play out? Perhaps Clinton wouldn’t have had bipartisanship as a goal. But in the end, there was no way to avoid eventually cutting a deal with Republicans over the debt ceiling sometime this year. One could argue that a more partisan approach would have been more successful, but why? How?

Even if Obama and Clinton would have had the exact same constraints, goals, and incentives, the outcome might differ if one simply had better presidential skills than the other. I’m not sure the evidence for Clinton’s bargaining skills is particularly strong, but suppose she was simply better at the poker game aspect of the presidency than Obama. If so, we can suppose she would have driven a somewhat better bargain in this instance, and perhaps in others. But then again, there are other aspects of the presidency that Obama probably trumps Clinton at; it’s hard to imagine that Clinton (and her husband) could have reached this point of her presidency without a hint of scandal that the press took seriously (regardless, of course, of whether there was anything to it). And with scandal usually comes lower approval ratings, and less leverage in Washington.

The bottom line, of course, is that it’s impossible to know how things would play out with someone else in the Oval Office, even in just one set of negotiations -- let alone over the course of an entire presidency. But we can say that in most instances there would be little difference between any two Democrats with similar campaign promises. And, for what it’s worth, at least some academic observers believe that the deal Obama cut with Republicans on the debt limit was pretty much what one should have expected. No matter which Democrat was president.

Jonathan Bernstein blogs at A Plain Blog About Politics.