The FBI claims to have found a lead in the famous hijacker's case. An expert explains why we're still captivated 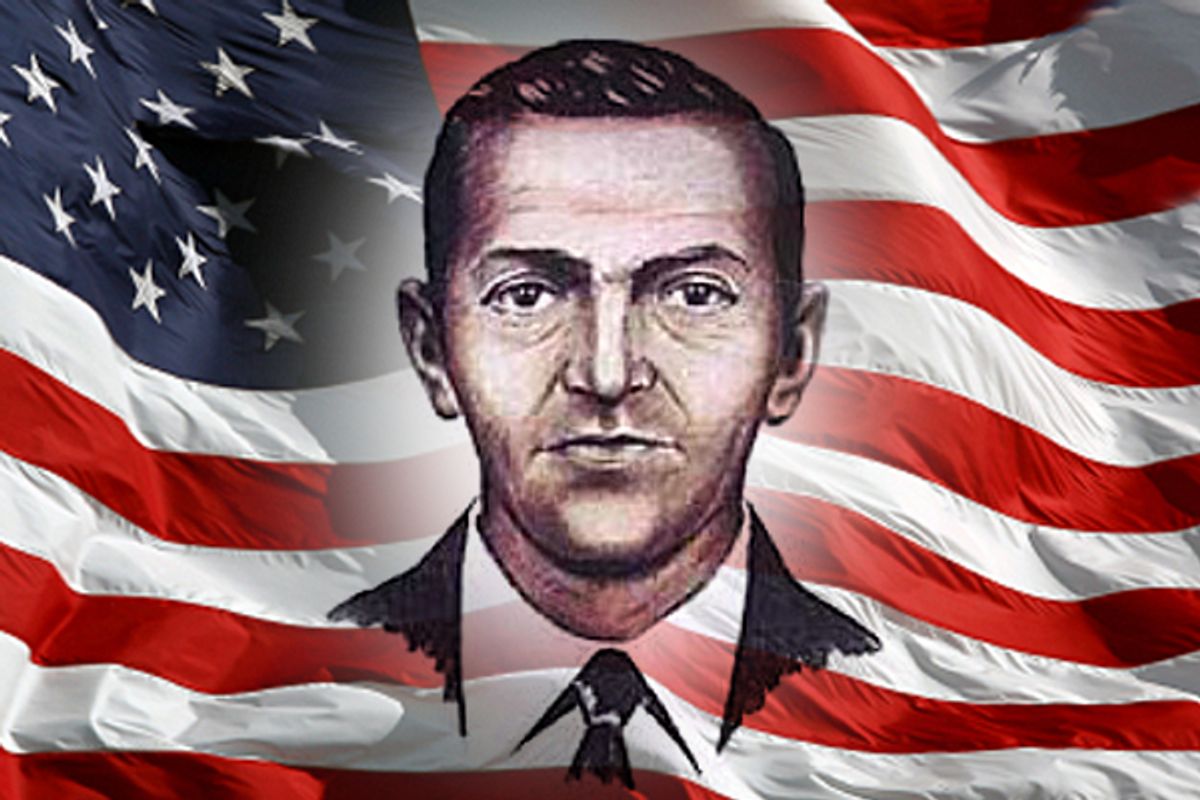 The legend of D.B. Cooper is a curiously enduring one. On the day before Thanksgiving in 1971, a man calling himself Dan Cooper boarded a plane in Portland, Ore., and after a drink and a cigarette, slipped a note to the flight attendant saying he had a bomb and was hijacking the plane. Within a few hours, he parachuted out of a Boeing 727 with $200,000 of ransom money and was never heard from again.

Even after 40 years, the FBI hasn't been able to pinpoint his real identity -- until, possibly, this week. The FBI claims to have a new lead in the case: A retired police officer suggesting the real D.B. Cooper died in a car crash in the Pacific Northwest 10 years ago. (So far an attempt to match the man's fingerprints, obtained from an old guitar strap, to Cooper's has proved unsuccessful.)

It's no small feat to hijack a plane and elude capture for decades, but what's more astounding is the iconic status D.B. Cooper has gained ever since. Perhaps it's because, as a nation of rugged individualists (or so we like to think), Americans are drawn to stories of rebels who stick it to the man. Or perhaps we just like a good mystery.

In the wake of this week's news, Salon spoke to journalist Geoffrey Gray, whose new book, "Skyjack: The Hunt for D.B. Cooper," is out on Aug. 9.

How do you think people will react if this latest news is true?

The news doesn't give a lot in the way of proof. All they have is a secondhand story, a guitar strap and a hunch. The Cooper case is littered with those. There are literally many feet of files full of those kinds of claims. So, before they release any information, I think the FBI needs to be sure they can prove the identity of the hijacker conclusively. I'm not sure a partial fingerprint or a partial strand of DNA is enough to get rid of the doubt that exists.

So either the hijacker got away with it for 30 years or he's still out there getting away with it. Regardless, the myth continues.

For this case, these kinds of leads have happened so often. What is different this time is that the FBI appeared to take it seriously by passing it along for testing and telling the public about it. One of the theories out there is that most of what the FBI has done has only taken them farther away from finding the hijacker. Five days after the hijacking, they released the Cooper sketch because they were desperate for clues in the case. But what happened next was that they were bombarded with information from all over the country because everybody saw somebody they knew in that sketch. So, they couldn't do any investigative work because there were too many leads to follow.

As it turns out, there were a tremendous number of hijackings in the early '70s. What was going on?

The story of a hijacking never starts in the plane. It actually starts on the ground. The United States in 1971 was a country at war with itself, and it was a time of tremendous upheaval. There was a recession happening in 1971 that coupled with a lot of counterculture stuff. The number of bomb threats and explosions in government buildings was at an all-time high. Inner cities were becoming ghettos. We were losing the Vietnam War and soldiers were coming home addicted to heroin. The overwhelming idea was that there was no control. The country was unhinged and there was a state of national paranoia.

What about this particular hijacking? Why were people so quick to get behind D.B. Cooper?

Seattle was a company town, and Boeing had laid off a lot of its workforce. Some of the best aeronautic engineers in the country had to mow lawns because there were just no jobs available. The Pacific Northwest is a unique part of the country that has a real outlaw, flannel, corned-beef-and-hash spirit. Because of the recession, the government started collecting back taxes, which forced a lot of people to sell their homes. Then the government bungled giving out emergency food rations to unemployed people by making it so bureaucratic that the food spoiled before they could get it out the door.

At the same time, these jumbo jets were coming off the line, and all these big planes were freaking people out. There was already resentment and fear against the government and the big and complex technology. The early 1970s is when big machines were coming into vogue, and anyone who was working with their hands or had a concept of what it meant to put in an honest day's work were disenchanted by the efficiency of the modern corporation. Then along comes Dan Cooper, a man who paid $20 in cash that day to buy a ticket from Portland to Seattle on a Boeing 727.

Was he immediately seen as a hero?

Almost immediately. I call him a transcendental hero because, through one tremendous act of courage, he was able to convince the good guys to root for the bad guy. He changed the moral compass of the moment. He had the FBI agents and law enforcement officials who were trudging through the woods in search of him -- but actually did not want to find him and hoped he would escape. They wanted him to get away with the jump because he executed all the romantic elements of the perfect crime: no harm done, no victims, skillful execution. It was hard not to be in awe of this one act.

Why does this myth captivate the American imagination?

In the cult of Cooper, people see who they want to see. At the time, people wanted to see this man as a hero who could do something that defied the government. It was a way to rid themselves of their own feelings of helplessness. D.B. Cooper was able to seize control and become the director of a great drama. After their houses had been taken from them because of money they owed to the government, followers of Cooper wished they could do that. Who's going to miss $200,000, especially when insurance is paying for it?

It's not like these people were slackers. They were hardworking people. The system and society at the time was becoming so unfair and mechanized, and this guy was able to turn that all upside down. In an airline town, he was able to defeat the airlines. He was able to defeat the government and law enforcement. What his real motives were is an entirely different question that we may never know the answer to, but that's not the story that lingers in legend. Any time you have a legend, you have a hero who serves a purpose. To this day, Cooper serves a purpose.

There is a rebel in all of us, some more than others. This guy was able to strike that chord. He was able to show us what something bold truly is, and we love that.

Is this why we still hang onto news about possible breaks in the case?

The frenzy surrounding news of this case is strikingly similar to what happened on Nov. 25, 1971. Once people learn that a man had boarded a plane just like everyone else does, was able to convince the FBI to give him four parachutes and a small fortune, then disappeared into thin air over the remote mountains of the Pacific Northwest, it's impossible not to be interested in the story, and it's very easy to become obsessed with it. In an environment where the mystery lingers, there is only the pursuit for the facts. In this case, the hunt for Cooper is a really bumpy, infuriating and life-changing road. People have devoted their whole lives to solving this case.

At this point, even if conclusive evidence existed, people would probably come up with reasons not to believe it.

If we think about what is going on in this country at this moment -- the debt ceiling, the recession, high unemployment, failed wars, the increased reliance on technology -- there are some strains of similarity. In approaching the 40th anniversary of this event, maybe we are just in a similar moment where this story is the kind people want to hear about. Maybe this is simply a ripple effect from the history of one man jumping out of a plane in such epic fashion.