Norway's right-wing on defensive after attacks 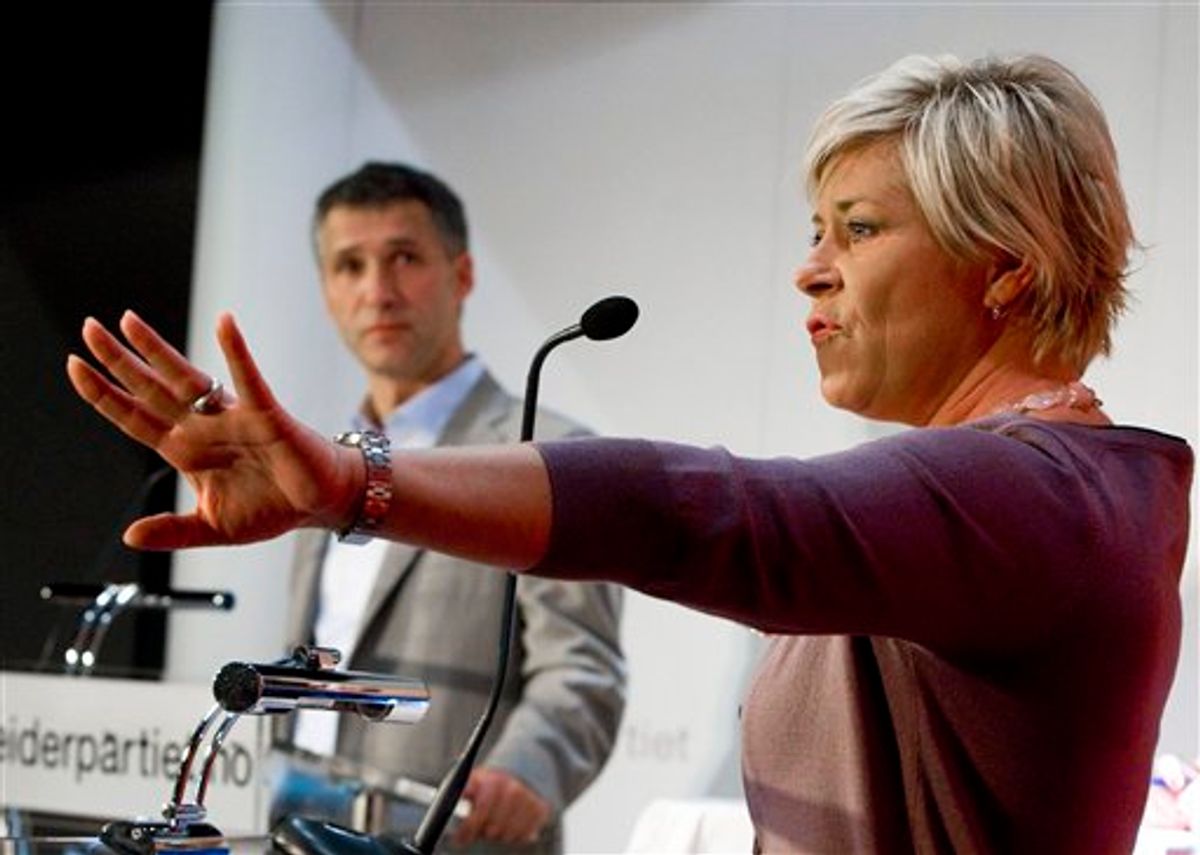 FILE - In this Sunday Sept. 14, 2009 file photo Siv Jensen, leader of Norwegian Progress Party, right, speaks during a last pre-election debate watched by Norway's Prime Minister and leader of the Norwegian Labour Party, Jens Stoltenberg in Oslo, Norway. The leader of Norway's right-wing Progress Party calls former member Anders Behring Breivik's anti-Muslim views "perversely unique" and not in any way linked to her party. Jensen told AP on Tuesday Aug. 2, 2011 he kept a low profile and never revealed his murderous plans: "It was impossible for us to forsee at the time. He obviously changed in recent years without anyone knowing." She resents being linked to Breivik's views, noting he condems "all political parties in Norway, mine included, because he feels that we are all responsible for what he feels is the wrong development of Norway and Europe." (AP Photo Heiko Junge / Scanpix Norway) ** NORWAY OUT ** (Associated Press)
--

Warning voters about the danger of increasing Muslim influence in Norway, the Progress Party rode a wave of anti-immigrant feeling and took nearly a quarter of the seats in parliament in the country's last election.

Now one of Europe's most successful right-wing parties is on the defensive after one of its former members massacred 77 people in the name of fighting immigration.

The Progress Party has confirmed that Anders Behring Breivik, the confessed perpetrator of last month's massacre, was a member between 1999 and 2006. That has focused intense criticism on its platform of sharply cutting the immigration that is changing Norway's once virtually homogenous population of white Christians.

"They have to change their tone," said Magnus Takvam, a political commentator for Norwegian public broadcaster NRK. "They have to reconsider their vocabulary."

Progress Party leader Siv Jensen has been criticized for warning of a stealth Islamization of Norway. And in May, the party's leader in Oslo called the governing Labor Party's immigration policy a "demographic experiment" and said a left-wing political elite was allowing Western civilization to be eroded by Muslim immigrants with opposing values.

Breivik also condemned leftists for their tolerant attitude towards immigrants from the Muslim world, but Jensen, 42, noted that he condemned all of Norway's political parties, "mine included," in the rambling 1,500-word manifesto he released before the massacre.

Breivik, 32, says he grew disillusioned with the party and concluded that the only way to stop what he called the "Islamization" of Norway and Europe was through armed struggle. Breivik has confessed to the twin terror attacks -- a bombing of Oslo's government quarter and a shooting rampage at a Labor Party youth camp -- that killed 77 people.

"He has obviously developed some very, very strange, sick ideas over the years," Jensen told The Associated Press. "His manifesto is perversely unique and cannot be linked to any organization or legal political party of Norway."

First elected into Parliament in 1973, the Progress Party has steadily gained support for its calls to sharply cut immigration and lower taxes, primarily by spending more of Norway's oil revenue now, instead of saving it for future generations.

No longer a maverick opposition group, the Progress Party now boasts support that few of its counterparts in Europe can match. It won 41 of the 169 seats in Parliament in the 2009 election, its best result ever. Only the Labor Party is bigger, with 64 seats.

But the July 22 terror attacks, which shook Norway to the core, have generated a wave of sympathy for Prime Minister Jens Stoltenberg's Labor Party, the apparent target of the attacks. Polls show its support surging, ahead of local elections in September.

Jensen said Breivik kept a low profile in the party and never revealed his murderous plans.

"He didn't say much, he didn't do much, he didn't take part in our activities at all," Jensen told AP in her wood-paneled office decorated with an American flag -- a gift from Republicans Abroad -- and a tiny bust of President Ronald Reagan. "So we could not foresee any of this."

In his manifesto, Breivik says he left the Progress Party after concluding "that it would be impossible to change the system democratically." Describing himself as a defender of Europe's Christian heritage, he couldn't accept that once homogenous Norway is now an increasingly diverse nation, where more than 12 percent of the 5 million residents are immigrants or children of immigrants -- about half of them from Asia, Africa or Latin America.

The number of Muslims is unclear because people aren't registered by religious affiliation, but estimates range between 2 percent and 4 percent of the population.

Stoltenberg's Labor Party embraces the idea of Norway as a multicultural nation, though it doesn't advocate unfettered immigration.

Stoltenberg has won praise for his statesmanlike demeanor following the attacks, calling for the nation to unite behind its ideals of peace, democracy and tolerance. His expressions of grief for the victims -- some of whom he knew -- have come across as genuine and heartfelt, and he has personally attended several funerals.

In a speech to Parliament on Monday, Stoltenberg urged all political parties to "choose our words more carefully in the future" in what was seen as subtle criticism of the Progress Party's rhetoric on immigration.

Jensen didn't see it that way, saying political leaders of all stripes have at times said something they regret. She suggested that campaigning for the local elections, postponed until mid-August because of the attacks, will be carried out in a less divisive manner than usual.

"I think she should not escape so easily," said Mehtab Afsar, secretary general of the Islamic Council of Norway, an umbrella group with some 70,000 members. "I think they have to think about what is so attractive in their program that people like Breivik come joining the party."