The next horrible budget showdown 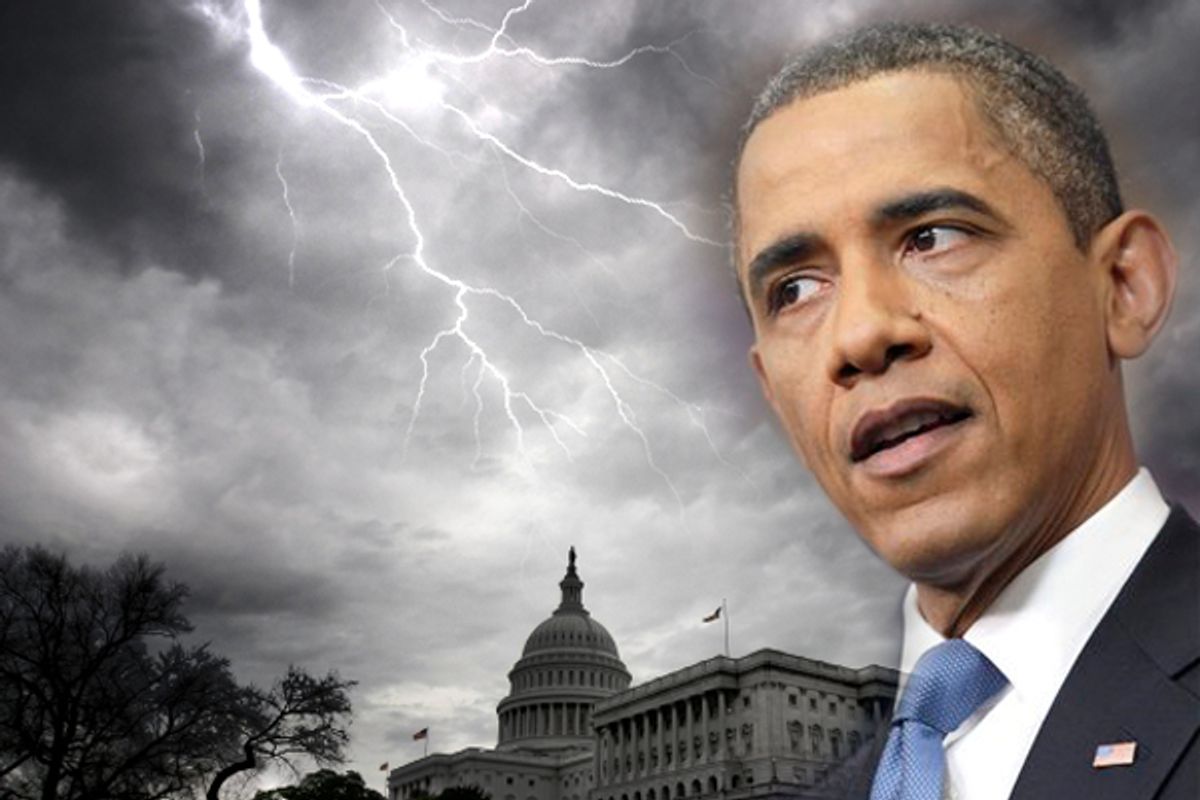 Put away your sharp knives, step away from the high-rise window, and make sure you know exactly where you've stashed your anti-anxiety meds. Because if you've been frustrated by the endless dysfunction of budget-related political warfare -- months and months of continuous struggle to avoid government shutdowns and outright default -- then you really, really do not want to think about what's coming next.

Which is another budget showdown, as soon as the end of next month, with all sorts of shiny new opportunities for hostage taking, extortion, grandstanding and, best of all -- spending and tax decisions that fail to address our pressing economic needs.

Just a few weeks after the House and Senate come back from the summer recess, three things will happen. The U.S. government will need to raise the debt ceiling again, the federal gas tax will expire, as will, most important, the continuing resolution that authorizes government spending.

Let's break these three opportunities for congressional warfare down:

The recently passed Budget Control Act stipulates that the debt ceiling will be raised in three stages. First, there's an immediate hike of $400 billion that should last the government through the end of September. At that point Obama will have to ask for another $500 billion. His request will trigger the Mitch McConnell "vote of disapproval" gimmick that was cleverly designed to give Obama all the blame for raising the debt ceiling, while insulating Republicans from any overt responsibility. Budget analyst Stan Collender forecasts how it will all play out:

While all that ridiculous bloviating dominates the airwaves, the White House will also be seeking an extension of the 18.4 cent per gallon federal gas tax, which expires on Sept. 30 and which provides the bulk of funding for the federal Highway Trust Fund -- the single most important source of government cash for mass transit and road infrastructure.

Politico reports that in previous Democratic and Republican administrations the gas tax has always been routinely renewed. But this year might be different. A Republican Party that has made lower taxes the holiest part of its catechism may decide to resist any renewal on principle, or at least hold renewal hostage in exchange for other energy-related policy goals (drilling in ANWR!).

And then there's the biggie -- the expiration, also on Sept. 30, of the continuing resolution that gives the government authority to spend money. If it seems like only yesterday that Washington dissolved into a storm of partisan bickering and shutdown threats, well, that's because we went through this whole mess in April. And now we're going to do it again.

In her much commented-upon piece "Five Things for Liberals to Like in the Debt Ceiling Deal" (liberals scoffed and Tea Partyers hyperventilated) Time's Jay Newton-Small made the eye-opening claim that the Budget Control Act would "ensure we don't have another bruising government shutdown fight over cuts in September," through the inclusion of a provision that "deems and passes the 2012 budget" without actually requiring a vote.

Stan Collender disagrees. In his opinion, the language of the deal simplifies the budget process by allowing the Senate to begin considering its own appropriation stipulations, but it doesn't obviate the necessity of getting a new continuing resolution to keep the government operating, if the House and Senate do not come to an agreement over the ultimate shape of the Fiscal Year 2012 budget before Sept. 30.

"I don't think there is any doubt that the House is going to demand additional spending cuts," Collender told Salon.

And why not? The strategy has worked out fabulously so far and it is setting up perfectly for Republicans again. It's a trifecta bet that's bound to pay off. While the White House formally asks for another hike in the debt limit and for the extension of a gas tax that hits every driving American in the pocket, Republicans will be pushing for more spending cuts and quite possibly threatening another government shutdown. They've proven they can play this game better than the White House twice already. Time for a hat trick!

So never mind all that talk about a "pivot" to jobs, or the absurd notion that, having now put the issue of debt reduction behind us, we can focus on other matters. By the time the House and Senate are back in session there will be barely three weeks left until the Sept. 30 deadline. Let the grandstanding, bluffing and threats begin!.

And remember, September's skirmishes are only a prelude to 2012's showdown on defense and Medicare spending, with the added fun of an ongoing presidential campaign to make sure everyone's rhetorical muscles are in the finest possible fettle.

It's the forever budget war.