Will independents reward Obama for the debt-ceiling deal?

The president thinks they'll thrill to compromise, but his approval rating among the unaffiliated dropped significantly during the crisis 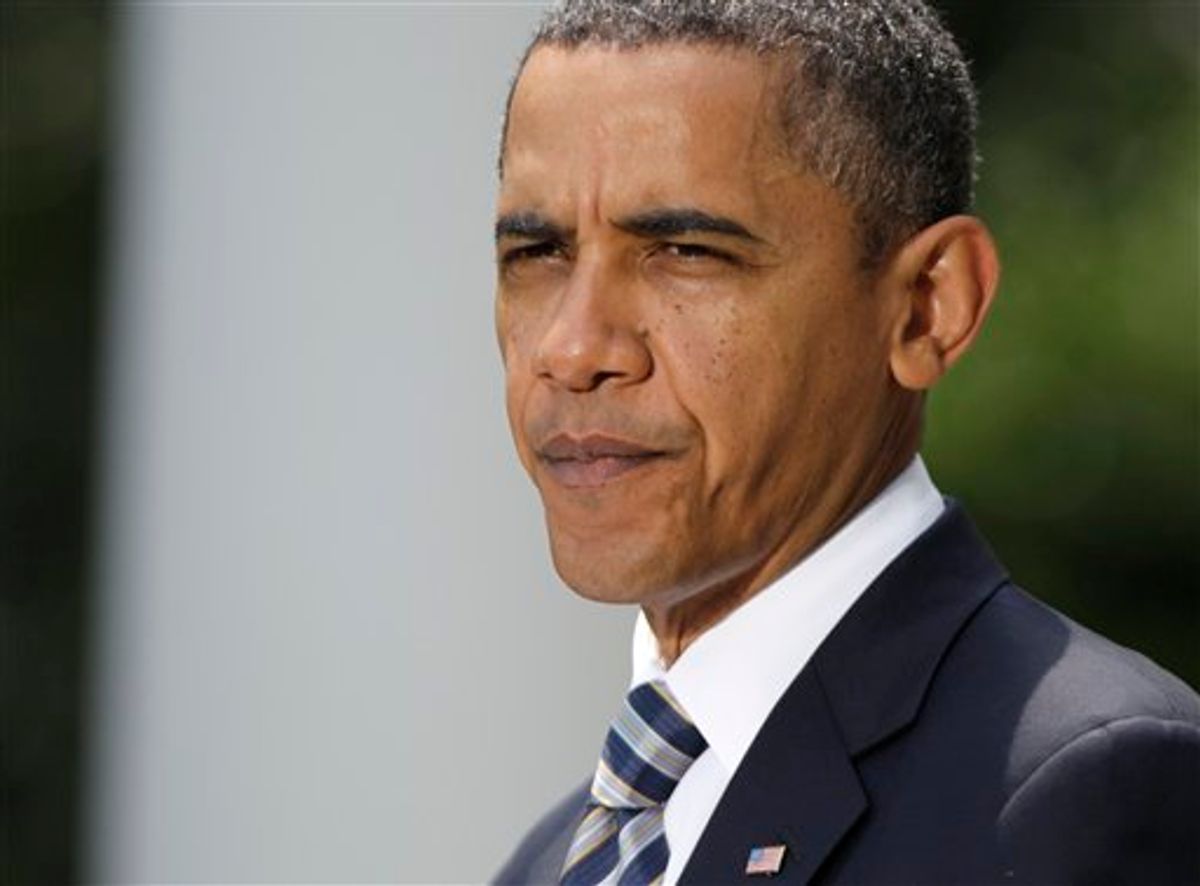 President Barack Obama pauses as he speaks in Rose Garden of the White House in Washington, Tuesday, Aug. 2, 2011, after the Senate passed the debt ceiling legislation. (AP Photo/Carolyn Kaster) (AP)
--

I was on vacation this week and tried not to pay minute-by-minute attention to the debt-ceiling disaster. I didn't always succeed. When I heard President Obama brag that the deal would bring the U.S. to "the lowest level of annual domestic spending since Dwight Eisenhower was president" Sunday night, I turned off the TV. That a 21st century Democrat would boast about cutting spending to levels sponsored by a mid-20th century Republican president – back before the nation passed Clean Air, Clean Water or Occupational Safety and Health Acts, or established Head Start, Medicare or Title 1 programs for the educationally disadvantaged -- is appalling. And yet no longer surprising.

What I didn't anticipate was the stock market's reaction to a debt deal. I didn't think it would trigger a market surge, but I don't think anyone anticipated that in the two days since the deal was announced Sunday night, the market would lose all the gains it made so far in 2011. It's now clear that it's not just the voters -- the markets are more concerned about the weak economy than the deficit. If the jobs numbers expected Friday are bad once again, look for a deeper market plunge.

So the market's not happy. What about independents? The president and his team believe that presiding over this not-so-grand but apocalypse-averting deal sets him up well for re-election in 2012. The Obama team has always believed the president's fate rests with independents, who they think value compromise over partisan grandstanding. But the president's approval rating with independents has dropped 16 points in the last few months, to an 36 percent. Only 31 percent of independents now say they would vote to re-elect Obama, compared to 39 percent who'd say they'd support a generic Republican. (Obama's best hope for re-election is the fact that Generic Republican won't win nomination; he'll be running against either a Tea Party extremist or Mitt Romney, and in most polls he beats both of them.)

Ruy Teixiera has a great breakdown of who these independents are, what they want politically, and why Obama is mistaken to hitch his re-election wagon to their political dreams. The people we term independents mostly aren't. Teixeira says most are "independents in name only," IINOs – voters who actually lean either Democratic or Republican.

Here's how Teixiera lays it out:

So how’s the debt deal going to go over with these different flavors of independents? Well, Democratic IINOs and pure independents both are concerned about the job situation over the deficit by a margin of two to one, according to Pew data. In fact, the only part of the “independent” pool that actually thinks the deficit is more important than the job situation are Republican IINOs, who right now give Obama a 15 percent approval rating, the same as regular Republicans. Good luck winning that group over.

In the short term, Obama tried to insist in his Tuesday remarks that he's still demanding a "balanced" solution that will include revenues, not just spending cuts, when the new anti-democratic Super Committee makes its deficit-cutting report to Congress at the end of the year. Well, I'm still demanding that Tea Party supporters send money to the Progressive Caucus. The president and I are likely to have equal luck with our demands. Obama also promised the deal "allows us to keep making key investments in things like education and research that lead to new jobs." I don't see how.

One sweetener for progressives is supposed to be that if the Super Committee can't reach agreement on deficit cuts, there will be automatic reduction to the defense budget as well as Medicare. Count me as a firm believer that the defense budget can and should be cut – but that's a crazy way to do it. Subjecting the defense budget to an automatic trigger, no matter what else is going on in December, is a political poison pill for Democrats on the eve of the 2012 elections. If the president allows the trigger to work, he'll be subject to a vicious GOP campaign savaging him for being soft on national security. This relatively hawkish president will be trashed as the weakest dove since George McGovern. There's no way the president's political team will ever let that happen. And while the "triggered" Medicare cuts will allegedly only hit providers, we've seen the way the GOP can spin any change to Medicare to hurt Democrats – even as they vote to end Medicare as we know it. I see no political comfort for Democrats in rejecting a Super Committee deal and pulling those triggers.

Jonathan Chait's got a more optimistic analysis here: He foresees lobbyists for defense contractors and hospitals and health care interests squaring off against one another, and forcing the Super Committee to reach a deal that includes tax cuts. I think that would be great, and it makes some political sense. But nothing that makes political sense actually happens in a Washington controlled by Tea Party hostage takers who are now aided and abetted by the Democrats who give them what they want. I think it's more likely defense and hospital lobbyists ally to bludgeon Democrats to accept a cuts-only deal in December. I hope I'm wrong. But I've been saying that throughout the debt-ceiling debacle, and I don't think I've been wrong yet.

What we have done, Larry, also is set a new template. In the future, any president, this one or another one, when they request us to raise the debt ceiling, it will not be clean anymore. This is just the first step. This, we anticipate, will take us into 2013. Whoever the new president is, is probably going to be asking us to raise the debt ceiling again. Then we will go through the process again and see what we can continue to achieve in connection with these debt ceiling requests of presidents to get our financial house in order.

Constant fighting over debt ceiling hikes and continuing resolutions will keep Democrats in a defensive crouch between now and the 2012 election. There is absolutely nothing to celebrate today.