Parton apologizes after the park stops a patron for her shirt. But should some ideas not be printed on your chest? 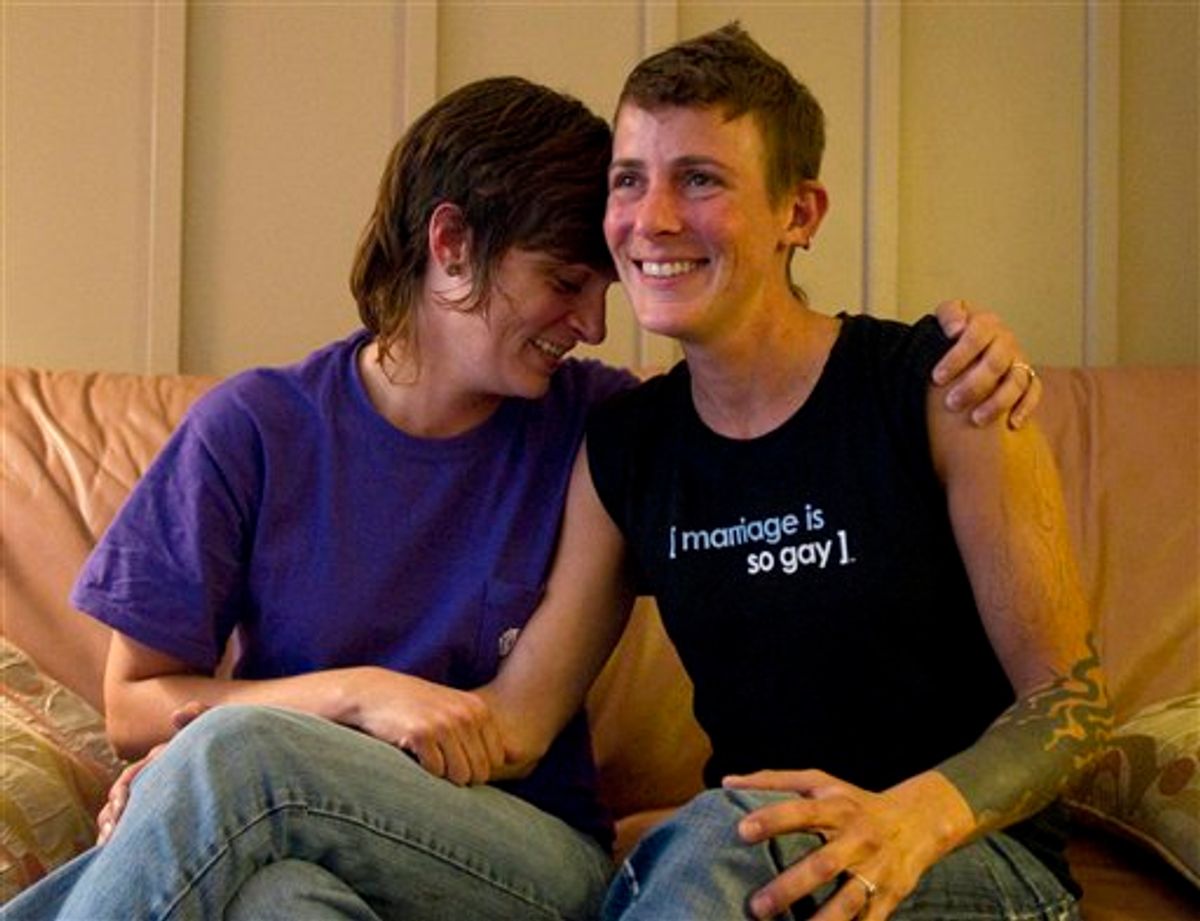 In a July 25, 2011 photo, lesbian couple Jennifer Tipton, left, and Olivier Odom are seen at a coffee house in Knoxville, Tenn. The couple are calling for Dollywood Splash County to be more inclusive to its guests after they were asked to reverse the pro-gay marriage T-shirt worn by Odom, during a recent visit. (AP Photo/Knoxville News Sentinel, Saul Young) (AP)
--

A headline-grabbing recent incident at Dolly Parton's Tennessee theme park has raised a variety of important questions: Does the right to freedom of speech apply to your chest? Is a tame joke about same-sex unions a "controversial" stance? And who knew that Dollywood had a "strict dress policy"?

When Olivier Odom headed into Dollywood's Splash Country last month with her wife and a friend's children, she was dressed in casual theme park attire -- including a T-shirt that cheekily pronounced "Marriage is so gay." But she was stopped at the gate by an attendant who told her she had to turn the shirt inside-out if she wanted admittance. As Dollywood P.R. manager Pete Owens explained to the Advocate, "Thousands of times a day our front-gate hosts are asked to enforce our dress code policy. It doesn't have anything to do with who the people are or what their belief system is ... (W)e try to prevent as best as we can upon entry of the park one of our guests being offended by something someone else is wearing."

That's a pretty tall order. You hope not even one guest will be "offended" by what someone else is wearing? Unless Dollywood has a strict "no jeggings or Boston Red Sox paraphernalia" policy, I'm pretty sure I could go there and find some umbrage for the taking.

Odom, who notes that her wife spotted patrons wearing Confederate flag shirts, complied with the request. Then she wrote to Dollywood to ask that it clarify its policy. She told a local NBC affiliate, "I was curious what he found offensive about the shirt. If it was the fact that it had the word 'gay' on it or that it was in conjunction with the word 'marriage.'"

Parton, an outspoken advocate of marriage equality, has now apologized to the couple, offered a refund, and issued a statement that "Everyone knows of my personal support of the gay and lesbian community. Dollywood is a family park and all families are welcome. We do have a policy about profanity or controversial messages on clothing or signs. It is to protect the individual wearing or carrying them, as well as to keep down fights or problems by those opposed to it at the park. We even offer free shirts in exchange to those who want to remain on the park." But the questions over the policy -- which is still in place, remain.

I can understand a profanity ban at a family park. Maybe you don't want a "Fuck Yeah" waiting at the bottom of Lil' Loggers' Landing. But setting a "controversial" limit -- especially in a place that apparently doesn't have a problem with pro-Confederacy sentiments -- seems like a massive can of worms. Would an "Evolve" shirt qualify? Or a "Thank God I'm an Atheist"? What about "Team Coco"? Or, considering that this is a park with an unironic Beaver Creek, would an illustration of a fan and the invitation to "Blow Me," or a picture of two birds with the word "Swallows" be acceptable? Who exactly is the Dollywood keeper of double entendre?

Personally, I'm at the age where I believe that clothes should be worn and not read. If I want to make a statement, I'll tweet it. But in addition to a beloved "I <heart> Jake Ryan" tee, I do possess a "Fuck Cancer" shirt, given by a good friend after my diagnosis and shortly before her own. It's a reliable hit around Sloan-Kettering, where it never fails as a bonding opportunity. But it's not the kind of thing I wear to church, nor did I pack it when I went on a theme park jaunt to Orlando, Fla., this past spring.

Not every hilarious, outraged, clever sentiment that fits on a T-shirt needs to be broadcast to everybody in your sightline. (I also have some pretty strong feelings about seersucker, but that's my own cross to bear.) That's the point -- we all have a responsibly to express ourselves sartorially in a way that isn't hurtful to others and is appropriate to the occasion. But we still have a right to show our support for the things we believe in. It's pretty simple -- "Marriage is so gay" is no "Bitch betta have my hunny." Dollywood staff could have handled it. Instead they made a tactical error -- and they wound up being the ones giving offense. At least now they're trying to make it right and learn from the error. Sometimes, like the shirt says, shit happens.