The roots of Thursday's market meltdown

With the debt ceiling deal done, investors take a closer look at the other side of the Atlantic -- and panic 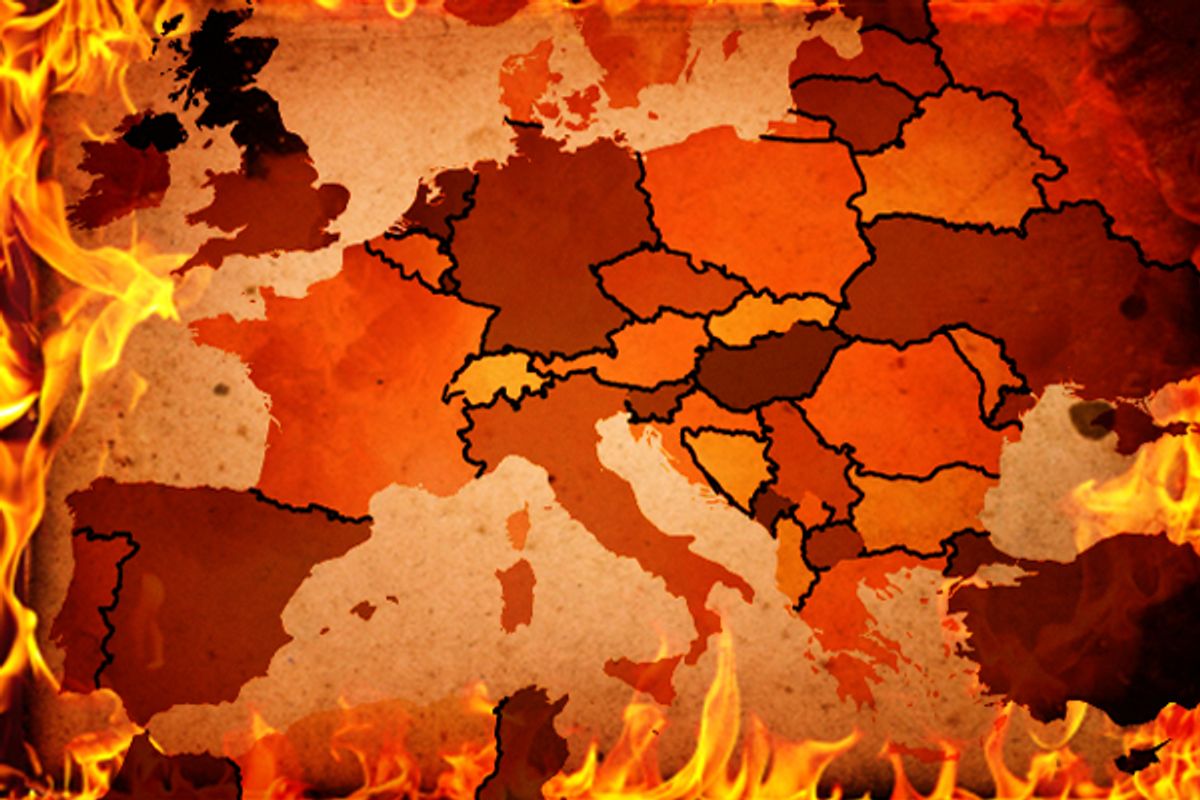 Major market meltdowns have a way of concentrating the mind. On Thursday, all three U.S. stock market benchmarks -- the Dow, Nasdaq and the S&P 500 -- experienced their worst days in years. The Dow closed down more than 4 percent -- over 512 points, its worst performance since December 2008.

The natural question on everyone's mind is why? We've known the U.S. economy has been slowing for months, and no mind-blowing new shocker emerged in the economic data on Thursday.

From a left-wing Keynesian perspective, it is tempting to wonder whether the debt ceiling deal's likely contractionary impact on economic growth is finally sinking in, but even that explanation doesn't seem sufficient to account for a market plunge on this scale.

The failure of the U.S. political system to properly address a slowing economy is surely an important underlying factor propelling Thursday's sell-off. But let's not underestimate the extent to which Europe's ongoing sovereign debt crisis is responsible for the fear and panic spreading like wildfire throughout investor circles. Maybe it's just as simple as this: The resolution of the debt ceiling ridiculousness cleared space for the world to focus on what's going on in Europe. And now that we're paying attention, we really, really, don't like what we see. The parallels to the credit crunch of 2008 get stronger every day. Capitalism, having been denied the opportunity for utter self-immolation three years ago, is eating itself alive, again.

The full story of the European financial crisis is a tale as old as the entire project for European monetary and political union. Basically, it's turning out to be extremely difficult for a group of nations to share a common currency without centralized control over fiscal and monetary policy or real political unity. The problem is exacerbated by a classic North-South divide. Thrifty Germans don't want to bail out profligate Greeks. But German banks are on the hook for loans to Greece, so everybody's stuck.

It's been clear for a very long time that Greece's financial situation was so bad that the country would eventually be forced to restructure its debt or default. The first tentative steps toward that restructuring came earlier this month. But as long as the sovereign debt problem was confined to relatively small nations like Greece or Portugal or Ireland, the actual cash necessary for a bailout that would ease the pain of default was considered manageable. As John Lanchester wrote in his excellent summary of the Greek mess earlier this summer, European monetary authorities "can write a check and buy the Greek economy, or the Irish economy or the Portuguese economy."

But Spain is the world's twelfth-largest economy, and the [European Central Bank] can't just write a check and buy it. A Spanish default would destroy the credibility of the euro, and quite possibly the currency itself, at least in its current form.

The same goes for Italy, the world's seventh largest economy. The big scary news this week is that "contagion" has spread from the little guy to the big. Bond investors are now questioning whether Italy and Spain can pay off their government debt. Rumors that Italy may be forced down the Greek path are flying through the markets. As a consequence, the yields that investors will accept for buying new Greek or Italian debt are rising sharply, which further raises government borrowing costs and makes Italy and Spain's fiscal situation that much more disastrous. To complicate matters even more, the biggest holders of government debt in Europe are big Europeans banks, who are watching their own balance sheets deteriorate by the day.

The self-fulfilling and self-perpetuating aspects of this dynamic are obvious. Bond traders get nervous about government finances, and start pushing markets in directions that make government finances degrade further. And so on. When government leaders point this out, pledging their "sound economic fundamentals," their self-serving avowals just act as another message telling traders to sell!

And suddenly, we see commentary like this, from the Wall Street Journal:

What was a battle to avoid a costly bailout has now become a push to avoid a doomsday scenario.

Sound familiar? A banking crisis, panicked speculators pushing markets into a self-sustaining downward cycle, a succession of patchwork responses by government that never seem to quite get a full handle on the situation ... it's 2008 all over again, except this time, we're not merely wondering which Wall Street financial titan will be the next to topple, but instead are waiting to see which sovereign pillar of the global economy is about to join the hit list. Italy and Spain this week -- France next?

The global economy can't bail out economies of that size. Something will have to crack.

Today, that something was the U.S. stock market.