Is there hope for books? 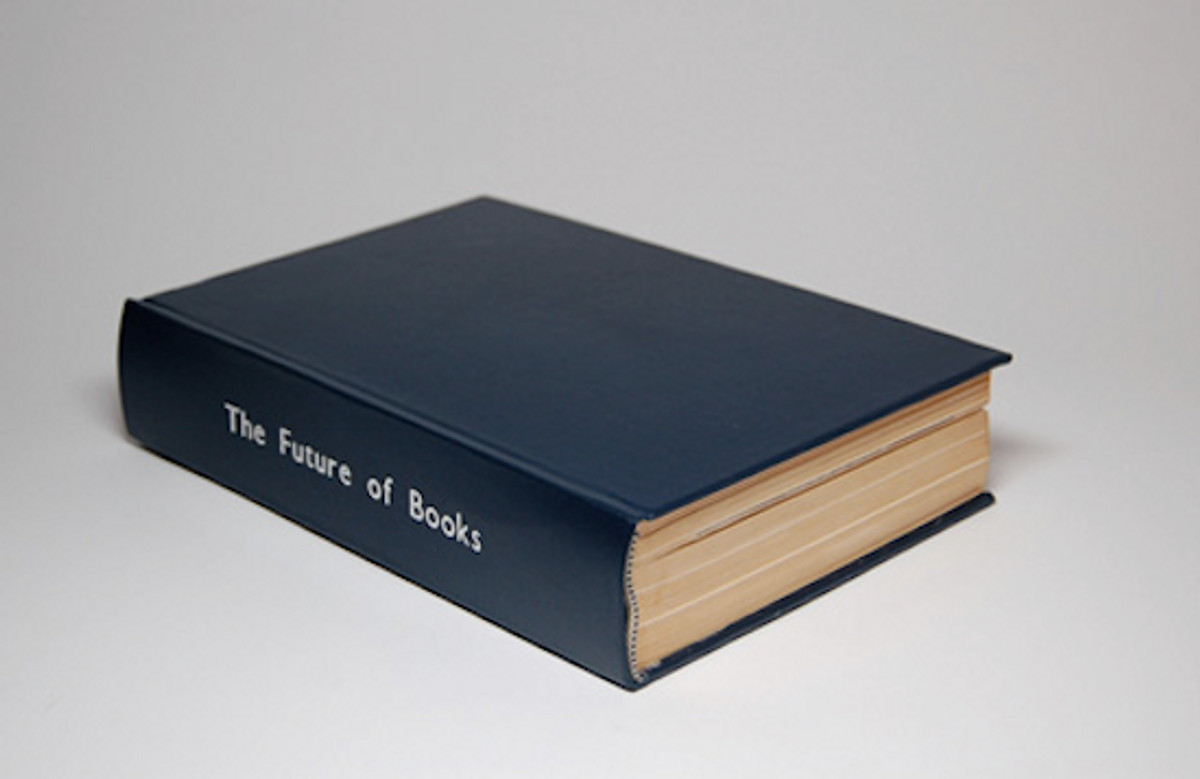 From Kyle Bean's "The Future of Books"
--

I first learned about the Institute for the Future of the Book while working on a magazine assignment that eventually became this piece for the Millions. In getting to know Bob Stein, his colleagues and the projects they championed I became convinced that concerns about the death of reading and writing were deeply misplaced. What readers, writers, publishers and retailers really needed to worry about, and catch up with, was the increasing potential of what a book's content could be, the delivery of the content and how we could interact with the content. Of course, plenty has changed in the intervening years and the institute continues to instigate the exploration of ideas regarding the future of the book. I caught up with Stein over the phone for his take on today's culture of reading.

The first time we spoke was back in the pre-Kindle, pre-iPad days of 2006. For decades, you've actively been thinking about and working to augment the future of the book. What is your read of how the concept of the book has changed in the past five years?

There is the question of how it has evolved in my mind and how it has evolved in the minds of the public. I view the book as a place where readers congregate and the social aspect of reading is where we're going. The publishing industry is trying very hard to keep the traditional model of a book intact, selling 300 or 400 pages to one reader at a time.

There is this social aspect: Books are becoming these places to congregate, the form of expression is undergoing changes. In most cases e-readers and the e-book developers haven't caught up to this. There are concepts that are too far afield, like people trying to write a novel collaboratively in "World of Warcraft." I have no problem with such a book being considered fiction just like Tolkien, but the execution isn't there. And then there is something like Push Pop Press. Yes, the Al Gore book has interactive media but it is just for one reader at a time. They are simply books with audio and video on the page. We figured that out long, long ago. And it isn't sustainable. When you're doing something for the first time you can beg, borrow and steal all sorts of help when it comes to all this content. But when you go back to do it again and again you have to pay up.

My big problem with these apps is that they are like CD-ROMs, in the wrong sense -- both are islands unto themselves. I'm reading "The Waste Land" all by myself. The apps are all walled in, all you have is the app. Heaven forbid you have an idea and want to go down the rabbit hole. You can, but you have to leave the app. I believe we are heading toward browser-based materials.

In light of how quickly e-readers have evolved do you foresee a time when printed books truly are a thing of the past? Will there be a time when e-readers will be able to compete with the most lavishly produced art book?

Yes and no. The reality is we're always going to have books but they are going to play a different role in culture. There will be collectible, expensive art books and books as objects. Rich people will be able to have expensive art objects but in terms of how most information will be moved around it will be electronic. Books will be beautiful objects, the same as when I'm in an antique store and buy a salt shaker -- I buy the object, a unity of form. from Kyle Bean's "Future of Books," via Yanko Design

When you talk about the future of the book, you are really talking about the nature of how content is generated and engaged, right? Is one of the greatest potentials for the future of the book that this fluid, democratized notion of a book's content will make for more transparency, especially in the ivory towers of the academy?

Let's look at it differently. Think of going to history class as a kid, 50 years ago, 15 years ago, it doesn't matter. The teacher gave you a book and the first impression you were given is, Here is truth. But we've developed a much more sophisticated understanding of truth -- it is something each one of us constructs from various perspectives. In the future we won't be as interested in one person's synthesis. Transparency is part of that but it is about coming at problems from different perspectives. My biggest thing moving forward is how we exploit this potential.

What is your ideal, your utopia, for the future of the book?

I've become interested in how context informs the reading experience, whereas a few years ago I was more focused on content. I'm interested by how context comes from different places, how it is shaped by different factors. During the Golden Notebook Project [a late 2008 "experiment in close-reading" that featured an ongoing conversation between seven readers that took place in the margins of the novel] I learned a huge amount just watching them read and debate the text. You can bring in various different glosses on a document. It is a richer experience with these different framing devices readily available, being able to see multiple perspectives and points of view at once. In the digital era context is what matters.

What was the last codex book you read? The last e-book?