Does eating right have to be expensive? 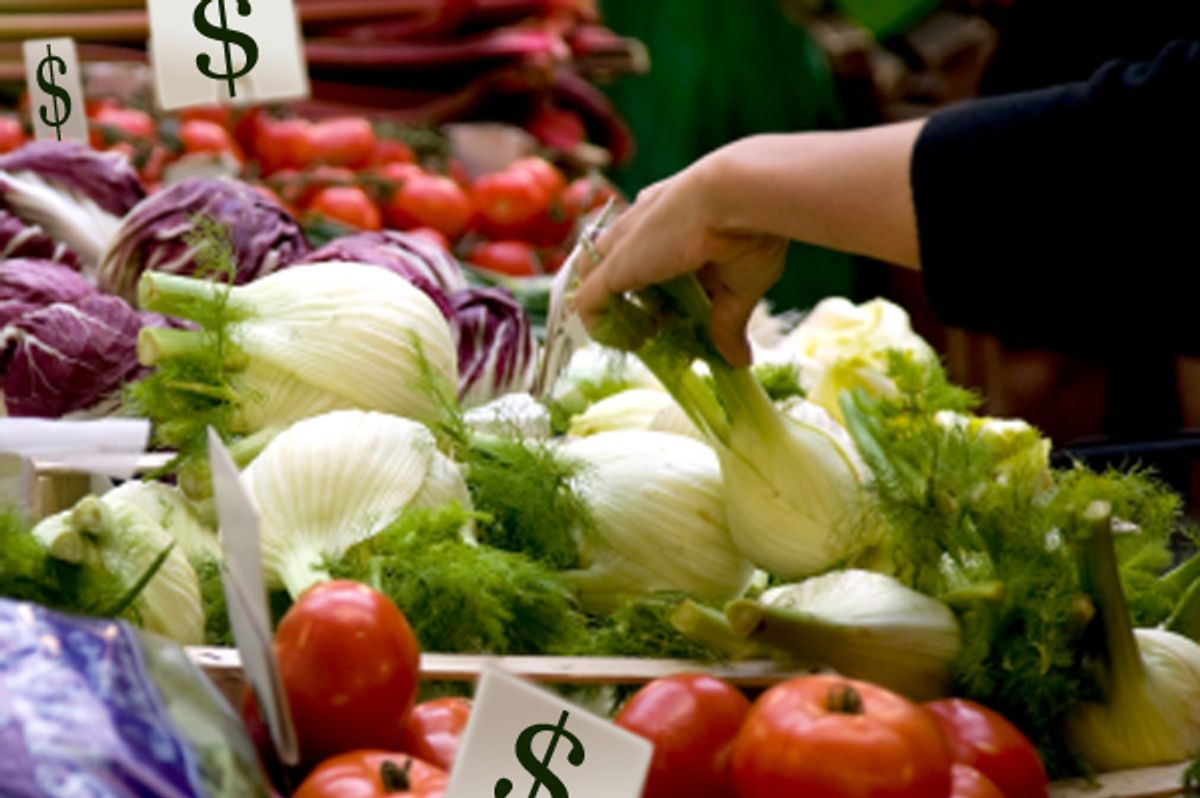 The headlines Friday on a new report published in Health Affairs all agreed. As USA Today wrote, "The high cost of healthy eating [is] out of reach for many," The New York Post added that "Eating right comes at a big fat price!" Even NPR, that bastion of green-tea sipping granola heads, declared, "USDA's Advice For Eating Right Is Hard On The Wallet." Stupid broccoli. You taste like broccoli AND you're expensive? Well, pass the Fritos, because I guess there's nothing to be done. Nutrition costs too much! Resistance is futile!

According to the study, which surveyed 1,300 participants in King County, Wash., shopping to meet the USDA's recently revamped nutritional guidelines comes at an added cost. Looking at what it would take to meet the recommended daily allowances of potassium, fiber, Vitamin D and calcium, researchers found that an individual's grocery bill could rise as much as $380 a year. As the lead author of the study, Pablo Monsivais, explained to NPR, "We're trying to understand the dietary imbalance, and our study shows there's an economic layer to it."

It's unfortunate and true. Plenty of research has found a correlation between obesity and income, with the nation's poorest hit hardest in the growing health epidemic. In the midst of our increasing economic nightmare, the family grocery bill is already bound to take a beating, and, as Marge Simpson says, "We can't afford to shop at any store with a philosophy."

But let's consider a few things before running out for another Taco Bell value meal. For starters, that $380 a year figure represented the uppermost parameter for how much survey respondents figured they'd need to hit their nutritional marks. That's a little more than a dollar a day. That's one iTunes song. Or, at roughly $32 a month, one mid-range restaurant meal out, tip included. Yes, it adds up fast when you're budgeting for a family, but as Monsivais told NPR, even that dollar a day figure could be dropped significantly by taking the time to shop for cheaper nutritional superstars like lentils, cabbage, carrots, oranges and bananas. So push that Whole Foods fantasy that eating right involves acai berries and fancypants mushrooms out of your brain right now. It's not necessary.

Another overlooked factor is the high cost of eating out, both nutritionally and financially. A hefty 37% of the average American food budget goes toward eating out, and in many U.S. cities, that figure creeps considerably higher. As a USA Today story on kids and fast food last year pointed out, a family of four can spend as much on one takeout meal as they would for groceries that would sustain them over several meals. Cook at home, boil some water, save some money.

I feel the economic pinch too, keenly. My household income has declined in the past two years, and yet, darn it, my growing children just keep needing meals. When I made the decision last year to give up the plastic-wrapped, back of the supermarket meat and chicken for local and organic, I had to accept that I'd be buying a hell of a lot less meat and chicken to fit within my budget. I wince at the cost of organic milk, which my daughters can chug by the jug. And loading up on squash and eggplant when marshmallows are on sale will kneecap a woman in the wallet and in her popularity within the family. But after crunching the numbers and living and shopping differently, I know from experience that it can be done. Beans and grains come in a wide variety of forms, and thankfully, they're cheap. Also, here's a tip -- water. Unlike juice and soda, it's free.

It takes time to scope out sales and figure out what's in season. It takes effort to support the local farmers' market over ConAgra. At the end of an exhausting day, it's hard work chopping up red peppers that the kids might reject anyway. And absolutely, food is both a social and economic issue. But remember that we've been living too long under the cheap-chicken delusion -- that mass produced food, cheaply made and distributed -- is both acceptable and a right. It's neither -- and the health benefits of proper eating should not be a luxury that only the wealthy should enjoy. A dollar at the max a day is a pretty small price, in the long term, to avoid the escalating drain on our health and our collective care system. To paraphrase that old saw about education: You think kale is expensive? Try heart disease and type II diabetes.