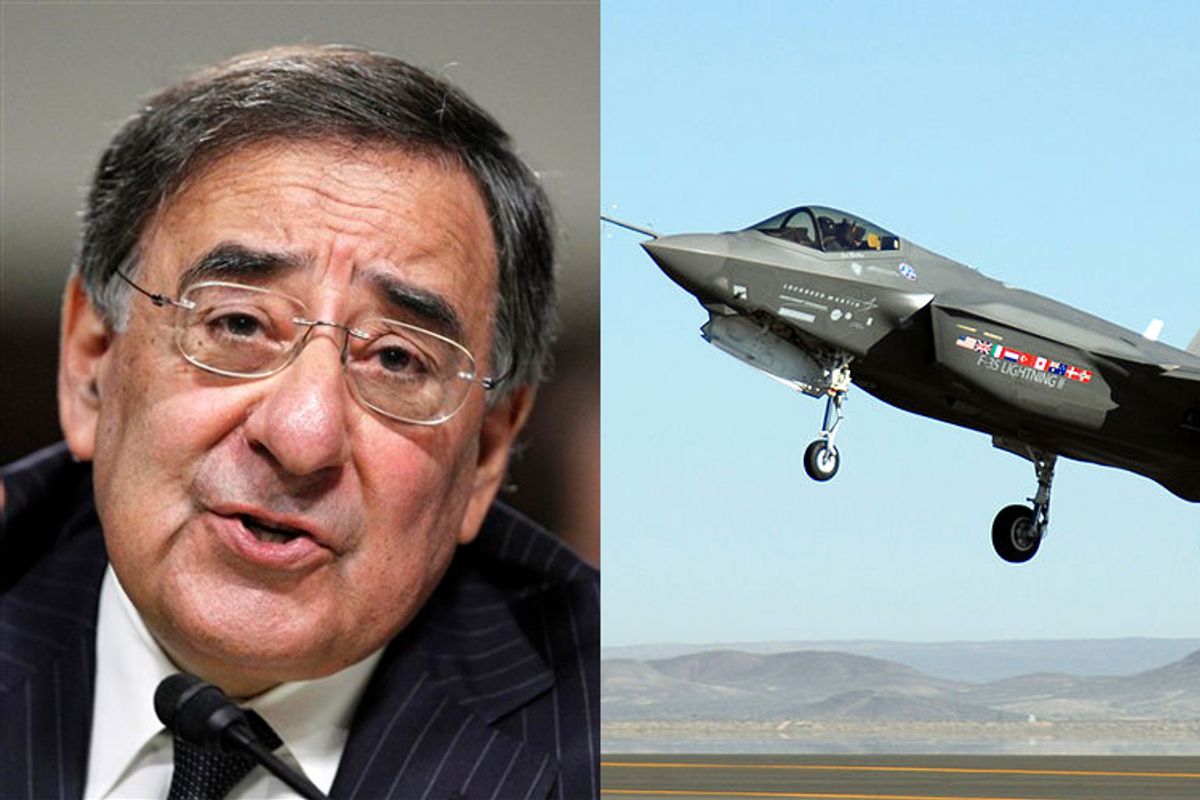 FILE - In this June 9, 2011 file photo, Defense Secretary nominee Leon Panetta testifies on Capitol Hill in Washington. ItÃ­s a short hop down the Potomac from CIA headquarters, where Leon Panetta headed the spy agency for 2Î© years, to the Pentagon, where he takes over Friday, July 1, 2011 as secretary of defense. The two jobs, however, are worlds apart.. (AP Photo/Manuel Balce Ceneta, File) (Manuel Balce Ceneta)
--

The theory of Round II of the debt deal is that both parties will be motivated to reach an agreement in the "Super-Committee" on how to reduce the debt by another $1.5 trillion because, if they fail to agree, there will be automatic cuts that are horrendous to each party: draconian domestic cuts will scare Democrats into compromising, while supposedly substantial reductions in military spending will frighten the GOP.  But a serious and quite predictable deviation from that scheme has already emerged: Republicans (at least its Tea Party faction) don't seem bothered at all by the prospects of military cuts, while Democrats -- specifically the Obama administration -- are acting as if such cuts, literally, would be nation-threatening.

Yesterday, President Obama's Defense Secretary, Leon Panetta, donned his Dr. Strangelove hat and decried these prospective cuts as a "doomsday mechanism" -- doomsday! -- warning that these would be "very dangerous cuts" that "would do real damage to our security, our troops and their families, and our military's ability to protect the nation."  Then, this morning, we have this from The Washington Post:

Defense Secretary Leon Panetta warned Thursday of dire consequences if the Pentagon is forced to make cuts to its budget beyond the $400 billion in savings planned for the next decade.

Senior Pentagon officials have launched an offensive over the past two days to convince lawmakers that further reductions in Pentagon spending would imperil the country’s security. Instead of slashing defense, Panetta said, the bipartisan panel should rely on tax increases and cuts to nondiscretionary spending, such as Medicare and Social Security, to provide the necessary savings.

Just think about that for a minute.  We have a Democratic administration installed in power after millions of liberals donated large amounts of their time and money to help elect them.  Yet here we have a top official in the President's cabinet demanding cuts to Medicare and Social Security in order to protect the military budget from further reductions.  That's the position of the Democratic administration.  While it's true that Pentagon officials reflexively protect the Pentagon budget, there is zero question that Panetta -- the career-long supremely loyal Democratic Party functionary -- is speaking here on behalf of and with the authorization of the White House; indeed, he said exactly that in the written message he sent about these cuts to the Pentagon's staff ("this outcome would be completely unacceptable to me as Secretary of Defense, the President, and to our nation’s leaders").

For all the boastful claims from Panetta and others about how much the Pentagon budget was just cut by the first round of the debt deal, the reality, as McClatchy detailed yesterday, is much different: "The new deficit-cutting law appears to reduce defense spending by $350 billion up front and perhaps by as much as $850 billion over 10 years, but in fact that's highly unlikely to happen."  That's because defense hawks ensured that these initial cuts would be applied not only to "defense" but also "security" spending, which encompasses programs "such as homeland security, border enforcement, foreign aid and even veterans' benefits as potential targets."  Moreover, as Foreign Policy's Josh Rogin explained on Tuesday night on Rachel Maddow's program, the magnitude of this first round of cuts as well as the potential series of automatic cuts in the second round is wildly overstated by administration officials given budgetary gimmicks in how these numbers are derived.

President Obama yesterday instructed his supporters on how to advocate for his re-election, and told them that when they go forth to evangelize about his accomplishments -- as Steve Benen did yesterday with his celebration of Obama as "the most effective politician since Reagan, and depending on the day, perhaps even the most effective politician since LBJ" -- that they should "not to get too bogged down in detail" but instead should emphasize broad themes and values.  As one example of how this avoid-the-details advocacy should work, Obama instructed: "If somebody asks about the war, whether it’s Iraq or Afghanistan — if it’s Iraq, you have a pretty simple answer, which is all our folks are going to be out of there by the end of the year."  Except that appears to be completely untrue, as his administration appears on the verge of succeeding in its many months of efforts to pressure the Iraqi Government to allow U.S. troops to remain in that country well past the 2011 withdrawal deadline Obama repeatedly vowed to enforce (and that's beyond the oversight-free private army which the State Department has long planned to keep in Iraq).

As the U.S. continues to spend almost more than the rest of the world combined on its military while it wages and escalates war in multiple Muslim countries around the world -- to say nothing of the dozens of nations in which it continuously engages in lower-level covert military action -- the very idea that American security would be gravely jeopardized by these cuts is absurd on its face.  If anything, American security is far more endangered by continuing on this path of unbridled militarism and aggression.  Yet here we have the bizarre spectacle of a Democratic administration demanding cuts to Social Security and Medicare in order to protect the defense industry from cuts that are, in any event, far less meaningful than are being depicted.  Given how public they're being with these statements, does anyone have any remaining doubt about the constituencies to which they're actually loyal?

There are reports this morning that a NATO airstrike killed (another) one of Gadaffi's sons in Libya, so we'll be able to have some collective celebration to keep our minds off little things like the collapsing economy.  It is telling indeed how virtually all political good news -- all national celebrations -- now involve America's ability to kill the latest Bad Guy.  One benefit of Endless War is that it distracts the citizens' attention away from what is being done to them at home and makes them cheer for the leaders who are doing it to them.

UPDATE:  Lsat week, Joe Lieberman said we must cut entitlement programs in order to "have the national defense we need to protect us in a dangerous world while we're at war with Islamist extremists who attacked us on 9/11 and will be for a long time to come."  About that, Joan McCarter wrote: "since the Super Congress has been created specifically to pit defense and safety net programs against each other, don't be surprised if you see this one getting traction" (h/t sysprog)  That is exactly the purpose of the "triggers" and the Super Committee; it is not hard to guess who will prevail in the war between entitlement programs and military spending; and Panetta's statements are little more than a push to ensure the right outcome.

UPDATE II:  The New York Times reported the same thing as the Post.  From the first sentence of that paper's article on Panetta's comments: "Defense Secretary Leon E. Panetta effectively told Congress on Thursday to raise taxes and cut Social Security and Medicare before taking another swipe at the Pentagon budget beyond defense cuts."  Even Bill Kristol seems more rhetorically restrained than Panetta about these cuts (h/t HTML Mencken).