Don't count on the GOP scoring an own-goal in '12

He sounds like Bush and he's talked about secession, but he's more marketable than the other Tea Partier running 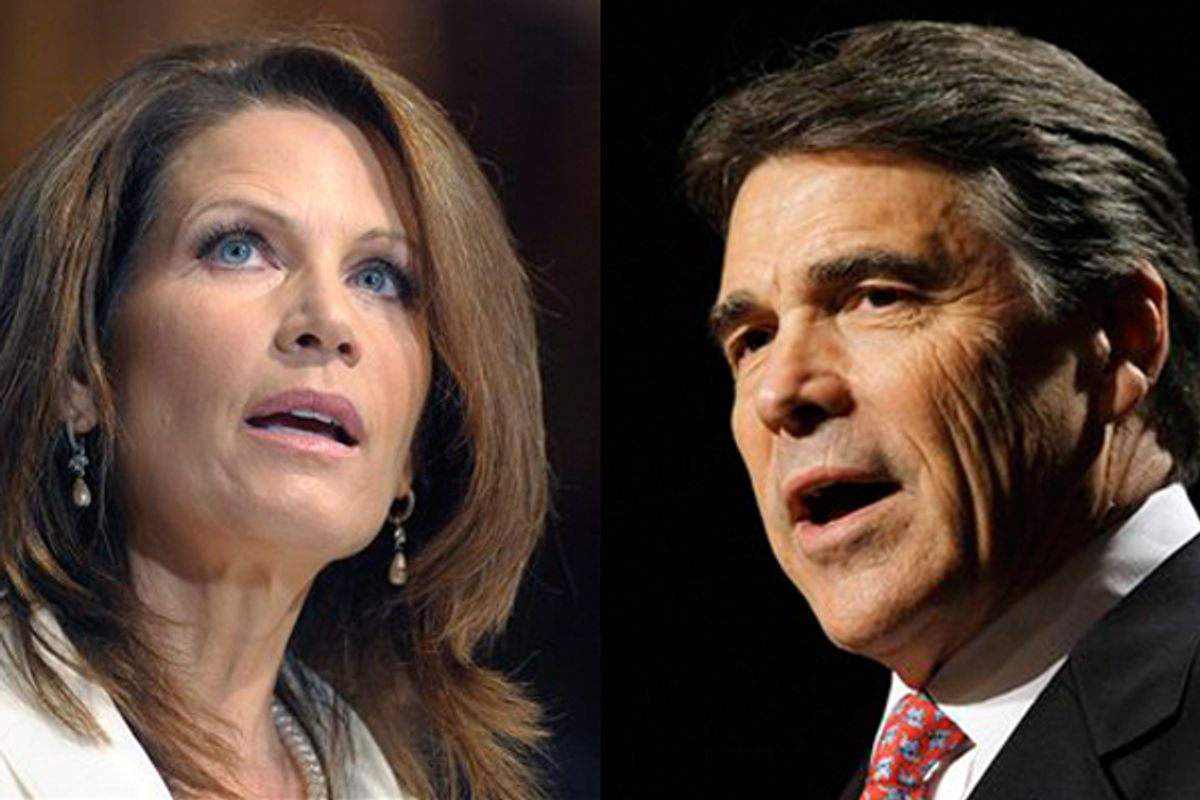 How many times in the last few months have you heard something like this: "Obama would be in serious trouble in 2012, if only the Republicans had a serious candidate"?

This kind of thinking is fairly typical at this stage of an election cycle. Even when an incumbent's approval numbers are dangerously low (as Obama's now are) and when there are strong signs that the campaign will be waged under adverse economic conditions (as there now are), there's a natural tendency to overstate the weaknesses and liabilities of that incumbent's potential opponents.

So even though this has been a particularly rough week for President Obama, Mother Jones' Kevin Drum still felt confident enough to assert on Thursday that "I don't think [Rick] Perry can win the Republican nomination, and I know that he can't beat Obama in a general election." And Tom Jensen, who runs the pro-Democratic (but highly accurate) polling firm PPP reviewed data his firm recently collected from likely 2012 swing states and concluded that "if the Republicans nominate Mitt Romney it's a toss up. And if they nominate anyone else it's 2008 all over again."

This is very dangerous thinking that ignores one basic truth about presidential politics: Candidates start to look very different -- to the media and to voters -- if they are able to win a major party's nomination.

Take Perry, whose entry into the GOP race seems imminent. A case can be made that he'd be particularly vulnerable to Democratic attacks in a fall campaign. He's publicly flirted with the idea of Texas seceding from the Union and has a speaking style evocative of George W. Bush, whose presidency most Americans still want to forget. (There are other potential liabilities too.) It is possible that, if Perry were the nominee, Democrats would be able to exploit all of this and cause him to perform several points worse than a generic Republican nominee would. And those several points could make the difference between reelection and one-termdom for Obama.

The problem, though, is that Perry really isn't known on a mass level yet. Sure, the political world knows all about him, and Republican leaders and activists across the country have been watching him closely for some time. But he hasn't received the kind of media exposure that comes from winning a presidential nomination. So he's easy to dismiss now as a Bush-sounding Texan with secessionist tendencies. But if he wins the GOP nomination and if Obama continues to be a vulnerable incumbent, Perry will at least have a chance to make a different impression on voters -- and the media could end up helping him.

We've seen this happen before. Bill Clinton was considered utterly unelectable in early 1992, even after he fought off Paul Tsongas and Jerry Brown to lock up the Democratic nomination. Polls showed more than 60 percent of Democratic voters wished they had another candidate and believed Clinton would lose to George H.W. Bush (even though Bush's own approval ratings were low, thanks to the economy). The pessimism of Democrats was palpable: Here we have this great chance to beat Bush, but we've wrecked it by nominating a draft-dodging adulterer who will be torn to shreds by the GOP attack machine.

But as the nominee, Clinton had an opportunity to change voters' minds. And with the economy floundering and Bush's numbers in decline, he also had a chance to convince the media to rethink its caricature of him. When the Democratic convention wrapped up in July, he was more than 20 points ahead of Bush, and he never trailed in a poll the rest of the way. In a matter of months, in other words, Clinton went from being another Dukakis or Mondale in the public's mind to being one of the most celebrated political talents in decades. As this played out, the change in the way the media presented him was dramatic. The draft, adultery and pot-smoking were suddenly portrayed as trivialities that desperate Republicans were clinging to. Clinton's charm and intellect were hailed in ways that would have been unimaginable in the spring of 1992. He was, in other words, treated like a winner.

The story was similar for Ronald Reagan in 1980. At the outset of that race, he was the Republican Democrats most wanted to face. Supposedly, Reagan's extreme Goldwater conservatism would be too much even for voters who badly wanted to throw Jimmy Carter out of the White House. Whoops.

The key for Clinton in '92 and Reagan in '80 was that economic anxiety was high and swing voters were inclined to vote the incumbent president out -- and to give his challenger the benefit of the doubt. It surely helped that both men were unusually gifted communicators, but those communication skills would likely have been for naught in a different, less favorable political climate.

The point isn't that Rick Perry is the next Reagan or Clinton. As I said above, it's possible that the national spotlight won't agree with him and that -- if he were to win the Republican nomination -- all of the vulnerabilities that Democrats now salivate over really would hurt him. But it's just as possible that the Rick Perry we see right now will not be the Rick Perry the rest of America sees a year from now. Winning the nomination to oppose an unpopular president has been a pretty bankable image modification formula in the modern era. (By the same token, if the economy were to rebound significantly in the next year, Obama's numbers would rise dramatically and he'd be a shoo-in for reelection; under this scenario, a Perry as the GOP nominee would be treated as a loser by the press, which would attribute his inevitable inability to dent Obama's lead to all of the liabilities that are now being discussed.)

Granted, there's still room for Republicans to score an own goal in '12. The odds that Michele Bachmann will win the the GOP nomination are slim, but not nonexistent. And while her image, too, would surely improve in victory, she'd be likely to face serious built-in resistance from swing voters in a general election campaign; her résumé is too thin (three terms in the House) and her history of fringe antics is too voluminous. It's much easier to imagine Perry, a three-term governor of a giant state, winning over the masses. It wouldn't be impossible for Bachmann to win a general election, but she'd need particularly awful economic conditions.

It's likely that the GOP's elites recognize this and will be able to steer the party's nomination to Mitt Romney or Perry. It's possible that either one of them will fall flat on his face against Obama -- but if economic anxiety is as high a year from now as it is today, I wouldn't bet on it.