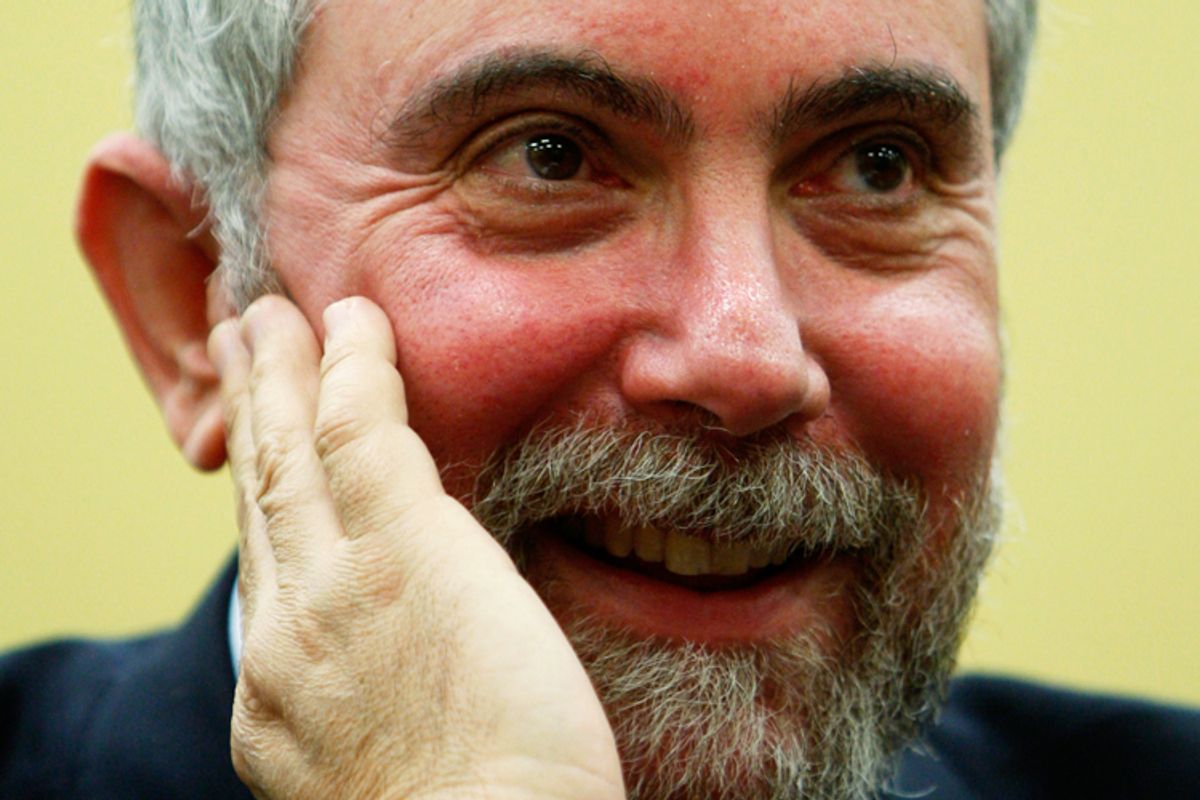 When a former former speechwriter for George W. Bush says nice things about Paul Krugman it's worth taking notice. Krugman was one of Bush's toughest critics; to suggest that he was correct in his savage evisceration of Bush's economic policies is apostasy of the highest order.

But Frum goes even further than that in his post "Were Our Enemies Right?" Frum suggests that the entire conservative movement has fundamentally misunderstood how to manage the economy, and he compares it to how the "left" failed to understand the true nature of Soviet Communism.

First he quotes a famous question posed by Susan Sontag in 1982:

Imagine, if you will, someone who read only the Reader's Digest between 1950 and 1970, and someone in the same period who read only The Nation or The New Statesman. Which reader would have been better informed about the realities of Communism? The answer, I think, should give us pause. Can it be that our enemies were right?

Then he offers his Krugman parallel:

Imagine, if you will, someone who read only the Wall Street Journal editorial page between 2000 and 2011, and someone in the same period who read only the collected columns of Paul Krugman. Which reader would have been better informed about the realities of the current economic crisis? The answer, I think, should give us pause. Can it be that our enemies were right?

Frum's point is interesting and provocative and I think it holds up. Yes, portions of the American left clung to unrealistic views of Soviet Communism in the '50s and '60s, and yes, the same can easily be said about the doctrinaire right's dogma about economic policy in the first decade of this century.

But here's where the parallel breaks down. Frum argues that Sontag's question "contributed to the rise of a healthier, more realistic left much less tempted to make excuses for 'progressive' dictatorships than the left of the last generation." But that's because the American left changed its views in response to reality. There is precious little evidence that the conservative camp -- outside of a few ostracized-and-excommunicated conservatives like Frum or Bruce Bartlett -- has changed its views on economic issues one whit.

Far from it -- they've doubled down! The federal tax burden has reached a 60-year low -- and they are still pushing for further tax cuts. A deregulated financial sector contributed to the excesses that caused the financial crisis, and they're still fighting, tooth-and-nail, every attempt at reregulation. History and economics tell us that cutting government spending in a period of low or negative economic growth runs a severe risk of slowing growth even further, and yet they've made deficit reduction their primary political goal.

In response to one of the greatest economic disasters in recent memory, the American Republican Party has become even more hard-line and rigid in its ideology. As one contemplates the very real possibility that the GOP could take both the White House and the Senate in the next election, that trend-line is a mite disconcerting.