Does Rick Perry sound too much like George W. Bush to be elected president? 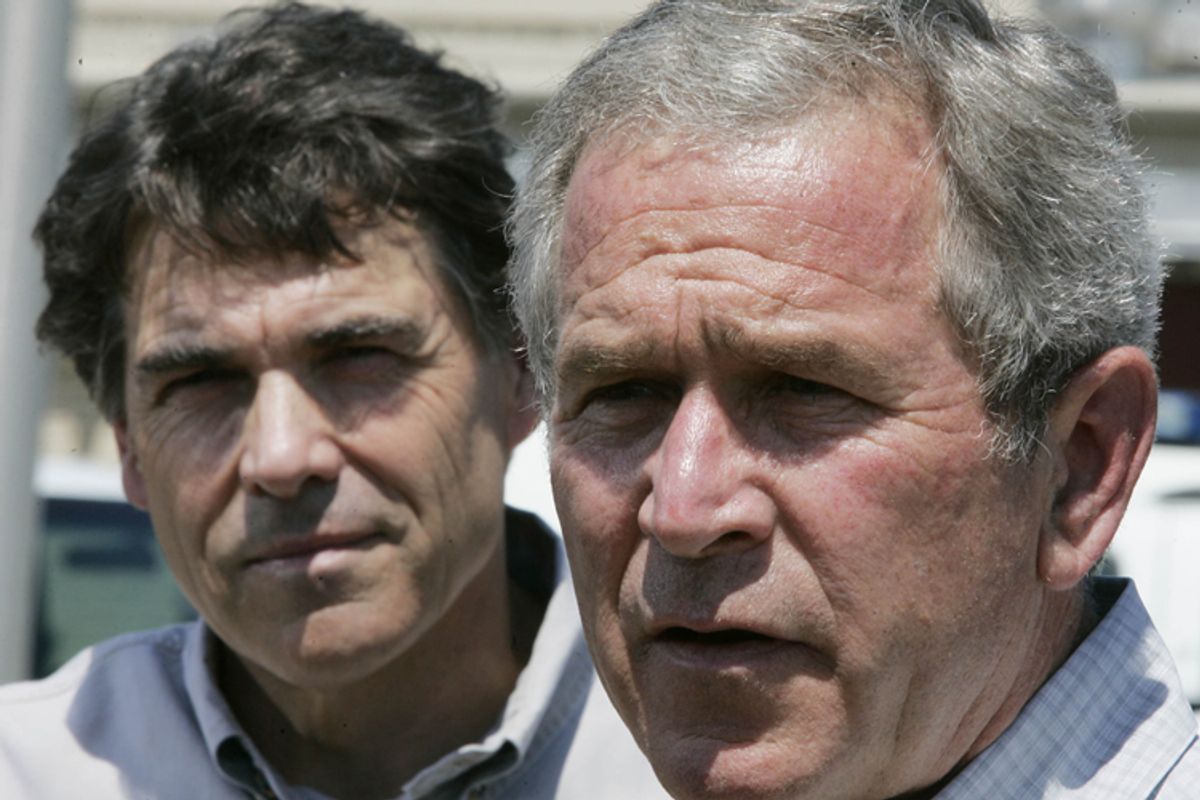 Former president Bush, right, speaks to reporters as Texas Gov. Rick Perry looks on during their visit to the Laredo Border Patrol Sector Headquarters near the U.S.-Mexico border in Laredo, Texas, Tuesday, June 6, 2006.
--

Texas Gov. Rick Perry looks increasingly likely to jump into the presidential race, and he has already been at pains to distance himself from the man he served in the late 1990s as lieutenant governor: George W. Bush.

But there's one potential problem here. To many people, Perry's Texas twang sounds eerily like Bush's. Indeed, Perry's hometown of Paint Creek is not so far from Bush's childhood home of Midland. But, unlike Bush, who left the state for Andover and Yale and Harvard, Perry never left Texas.

Third-tier candidate Gary Johnson quipped the other day that Perry sounds like "he's doing a parody of George Bush. And I was looking around to see if anyone else saw the humor in that. And it wasn't. It was just the way that he talked."

For an informed take on all this, I spoke to Allan Metcalf, an English professor at MacMurray College and author of "Presidential Voices: Speaking Styles From George Washington to George W. Bush."

To my Yankee ears, Perry's speaking style sounds a lot like George W. Bush's sounded. What do you hear in it?

In terms of pronunciation, instead of the Northern long "i" he says "ah." So "like" is "lahke." And "guy" is "gah." That's a typical Southern and Southwestern pronunciation in contrast to the rest of the country. He also has a little bit of uptalk in his intonation, ending in a rising voice and making some of his statements sounding a bit like a question. That's sometimes a Southern thing. Bush did that a little as well. I think Perry has more of a Southern pronunciation than George W. Bush did. I don't remember the "ah" sound coming out so clearly instead of "i" in Bush's speech. But generally Perry does sound Texas like George W. Bush.

Perry was of course George W. Bush's lieutenant governor in the late 1990s. Are there other areas in which their speaking styles are similar or different?

In my book I say that there are two ways of sounding presidential. One way is to be distinguished and elevated, starting with the example set by George Washington and his immediate successors, who were highly educated and very well spoken. That tradition also goes up to the present with someone like Barack Obama, who has a rather well-spoken, high-end style. But then also, going way back to Andrew Jackson, is the notion that the president should sound like a man of the people. George W. Bush particularly made a point of sounding down-to-earth rather than elevated. I was impressed in the CBN excerpt [above] by the way Perry on the one hand sounded down-to-earth -- he used "snitch" and "kinda" -- but on the other he was talking about "laboratories for innovation" and clearly in command of dignified language as well.

Bush had just the down-to-earth style. It appears that Perry has both that and the educated and thoughtful style. That ought to serve him well.

A lot of Northern liberals hated listening to Bush speak. What are the connotations of this speaking style in the South versus the North?

The interesting thing is that until the mid- or even late-20th century, it appeared that someone with a Southern way of speaking wouldn't have too much of a chance of being president. But I don't think liberals were unhappy with Jimmy Carter's Southern way of speaking, or Clinton's. In recent years things have really opened up in terms of the particular regional accent presidential candidates have. You can be from anywhere and it won't necessarily be held against you. I think voters still want a president who is down-to-earth and also one who can be dignified. But there's no longer a stigma against being a Southerner.

If Perry's speech specifically evokes George W. Bush in voters' ears, would that be potentially problematic?

On the one hand, he sounds even more folksy in his accent than Bush, but on the other he doesn't tangle up his words. Even Bush's supporters were a little embarrassed about how he would fumble. It's pretty clear that Perry has a much better command of the language. Bush didn't command it so much as get chased by it.