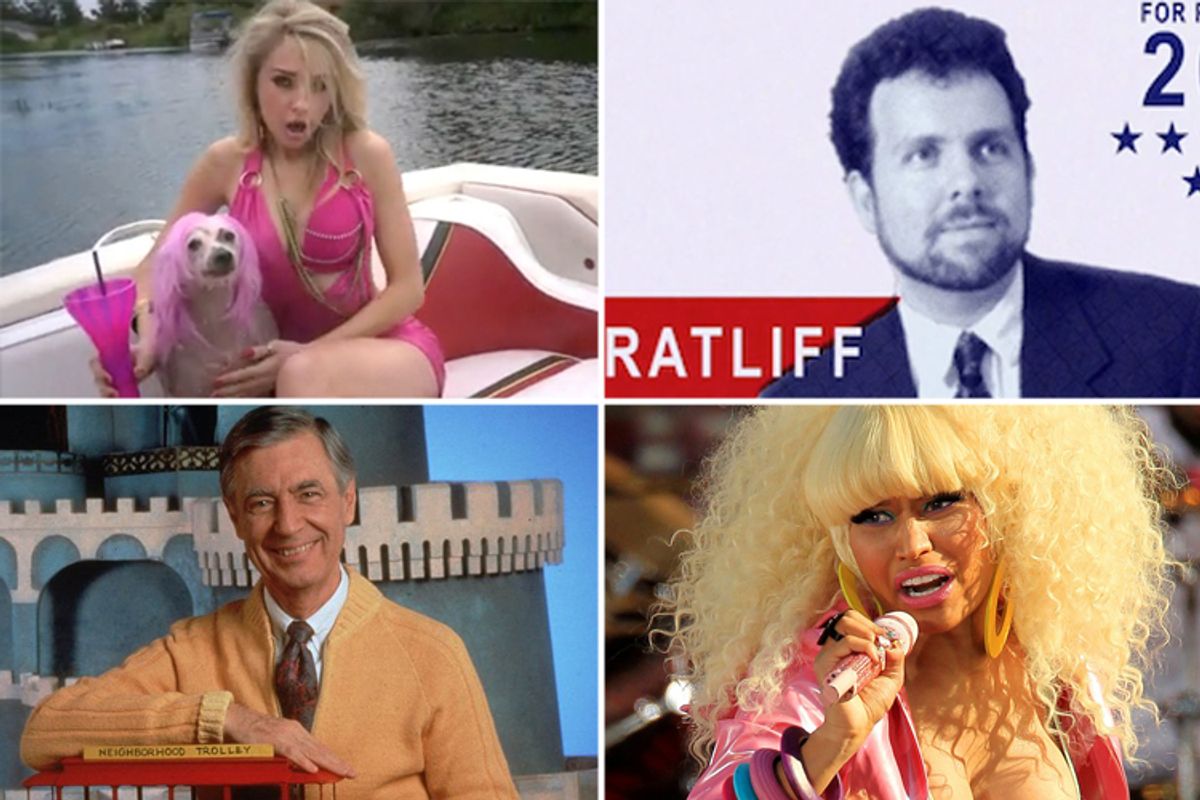 Guess which one of these things makes us the most uncomfortable?
--

TGIAugust, am I right guys? I cannot wait for summer to be over and for it to be cold again, because you know what they make children say in the Pledge of Allegiance: "Winter is coming." While we're still dealing with the warm weather, though, how about a roundup of all the cultural news that makes you feel like you just don't know what to feel anymore?

1. Jesse Eisenberg in Dostoyevsky adaptation: It sounds crazy, but making "The Double" into a movie might actually be a good idea. Very Charlie Kaufmanesque. Maybe Michael Cera can play his doppleganger?

2. Connor Ratliff is old enough to be president: Well, I'm sold on this guy's campaign. If only the rest of politics were this easy.

3. Requirements for Professor James Franco's NYU class: Must be able to transfer poetry into film.  Preferably poetry Dr. (he has a doctorate by now, right?) Franco wrote himself. And also he gets to direct the movie. And star in it. Everyone gets an A!

4. A Mister Rogers spin-off series?: "Daniel Tiger’s Neighborhood" will feature the son of Roger's puppet "Tiger," as well as other beloved characters from the original PBS show. Except now they are all grown up, aren't puppets and really have nothing to do with the original. You'd think PBS would pretend it came up with its own idea for a program, but I guess not.

5. Everything Sarah Palin touches gets its own spin-off show: First her hair salon,  now this program called "H8R," which involves pairing a celebrity with someone who despises them.  This is what happens when network execs get together over a cocaine brunch and come up with a new idea, so on second thought, let's stick to the Mr. Rogers' show.

6. Nicki Minaj's nip-slip on "Good Morning America": I love when they call these things "wardrobe malfunctions." As if your outfit was a robot suffering from circuit damage.

7. Doug Hutchison and child-bride ask America for money to "promote" themselves: You know what? I called this. Just give these awful people their own reality show already: You know that's what this country really wants to see.

8. John Wayne's grandson makes great analogies: Brendan Wayne on comparing Harrison Ford to his granddaddy: "It’s like comparing Kobe Bryant with Michael Jordan. It’s like saying, 'Obama is our generation’s Washington.' Just let him be Obama." AND GIVE HIM BACK HIS FAMILY!

9. "Rise of the Planet of the Apes" garners rave reviews from critics: How is that humanely possible? Unless…the apes have already begun their infiltration of our society???? I for one, welcome our gorilla overlords.

10. The best of the week's viral videos, explained: If you don't know who Gabe and Max are, just be aware that they are very good at talking about the Internet, especially the part of the Web that involves dancing animals on YouTube.