Jason Bourne, James Bond and other heroes live on, despite their creators' deaths, thanks to "the continuators" 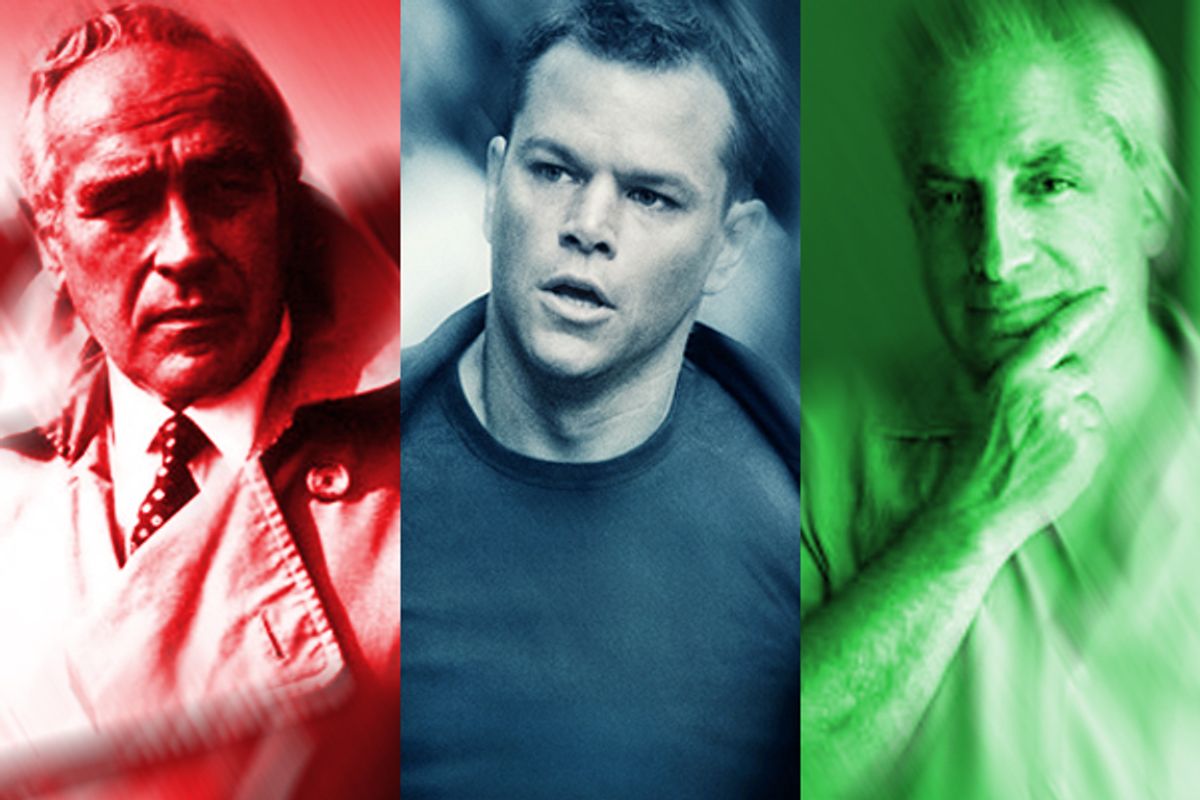 Some call them "the continuators" -- choosing a term with appropriate Schwarzenegger swagger to describe the writers charged with reinvigorating aging heroes and keeping valuable franchises alive.

Critics sometimes use less charitable names. After all, literary respect and acclaim don't always follow for writers who step into the shoes of the late greats and revive old characters after their creators' deaths. (Robert Goldsborough, who continued Rex Stout's Nero Wolfe mysteries, playfully addressed the continuator's plight in a Wolfe meta-mystery about the murder of another, fictional continuator.) Expectant fans are often wary, too. If your name isn't Ludlum, Parker, Fleming or Spillane, it's not always easy to convince obsessives that you understand Bourne, Spenser, Bond or Hammer.

But the writers who embrace the task of continuing other authors’ series face a set of challenges all their own: adopting and modernizing familiar characters; respecting the voices of the dead; dealing with the demands of authors’ estates. And while they bristle at the term "ghostwriter," their books are clearly haunted by the beloved authors who first breathed life into the characters these continuators carefully but creatively resurrect.

So why do these authors -- many of whom have written blockbuster best-sellers of their own -- want the hassle and the pressure? Sometimes it's the thrill of writing a favorite character. Other times, as with Collins and Spillane, the writers are long-time friends and the younger one is eager to continue his mentor's legacy.

Eric Van Lustbader, who has so far written six continuation novels in Robert Ludlum's Bourne series, says the initial approach from the Ludlum estate came "out of the blue" about a decade ago, as the Matt Damon films featuring Bourne found a new generation of fans. Ludlum published the original three Bourne novels between 1980 and 1990.

"I frankly didn't know whether I wanted to do it; Bob [Ludlum] and I were very good friends, and I knew Bourne inside and out. I said to [the estate]: 'I'm not a ghostwriter, so I'm not going to write in Bob's style, and I'm not going to write a book that has his name on it; if my name isn't on it, I'm not really interested.'"

Assured that both his artistic license and his byline would be safe, he asked his agent for advice. And then adrenaline kicked in. "By the time I got into the shower the next morning," he says, "I had the idea for 'The Bourne Legacy.' I wrote it up as a two-page outline, and everybody loved it -- so I said yes."

Lustbader explains that he's killed off so many of Ludlum's original characters over the years that "everybody in the Bourne universe... except for Bourne, is my creation."

Indeed, now that Lustbader has written twice as many Bourne books as Ludlum, one could reasonably argue that he had some right to Bourne himself.

"The executor of the [Ludlum] estate said to me a couple of years ago, 'Bourne is now your character,' which is about the highest compliment he could give me," the author says with pride.

Whatever else may change, however, Ludlum’s ghost seems unlikely to absent itself from Lustbader’s creative psyche. "I always feel Bob over my shoulder," Lustbader says. "Not in a bad way, but in a good way. It sounds crazy, but sometimes I'll ask him: 'Is this OK to do?' or 'Does this sound right?' And I'm always right in what I do. ... Through reading Bob's work over the years, but really [more] through talking to him, I know Bourne inside and out. [In fact,] Tony Kilroy [the screenwriter for the Bourne films] and I are the two people on the face of the earth -- living, I should say -- that know more about Bourne than anybody else."

Jeffery Deaver -- whose new James Bond novel, “Carte Blanche,” debuted to breathless reviews earlier this year (the American author is "a far better craftsman than Fleming," The Telegraph swooned) -- did not have the advantage of a close friendship with Bond's creator. But he is a longtime 007 fan, and jumped at the chance to participate in the franchise.

"I had two requirements," he explains, "and they were really pretty simple. First of all, I would only do the project if I could update Bond. I did not want to write a period piece; I wanted the book to be set in the present day, and Bond to be a young, 30-ish agent.... I did that because my theory about writing my kind of novel, which is a commercial thriller, is that I want to be as emotionally engaging as I possibly can.

"Requirement number two was that I wanted to write my own book. I was happy to populate it with a traditional James Bond (although updated), but I did not want to write, as Sebastian Faulks did years ago, as Ian Fleming. For one thing, I don't think I have the skill to credibly adopt someone else's style -- but I was also very aware that I've got a couple million readers around the world who expect a Deaver book every year, and I have a very specific formula of story that I tell, and I wanted to make sure that my readers got that."

In crafting his younger, modern Bond "reboot," Deaver says he "stuck to facts that Ian Fleming put in the original books. Those were my only source materials -- I didn't pay any attention to the [other] continuation novels or the movies." Where Fleming left grey areas, though, Deaver did take the liberty of adding his own twists -- and ultimately, he says he found writing Bond no different from writing any other character: "the character inhabitation part is something that just goes with the territory of being a novelist," he tells me, "and something I enjoy."

"My goal was to imagine that Bond had not existed and that I was introducing a new generation to the Bond books," he adds. That said, it’s clear he went to considerable lengths to impress diehard fans, steeping himself in “Britishness” -- reading British newspapers, watching British television programs, driving around parts of Britain taking pictures of local shops -- in order to ensure that no cultural references would rub Bond fanatics (or his own savvy readers) the wrong way. (Apart from one stray reference to a “snow angel” -- an unknown animal in the UK -- he’s convinced it seems to have worked.)

The circumstances surrounding Michael Brandman’s continuation of Robert B. Parker’s Jesse Stone series, which will begin next month with “Robert B. Parker’s Killing the Blues,” somewhat resemble those described earlier by Lustbader. Brandman was a close friend of Parker and his family, and had even worked with Robert to adopt many of his works for the screen before the beloved author’s untimely death last year.

Brandman differs from Lustbader in that he is not a novelist by trade, but rather a successful producer and screenwriter.

"Transitioning from screenplay form to prose was challenging," he admits. "The goal was to finish the book. I've had the great pleasure in my life of having produced the work of some of the greatest writers we have -- including Stephen Sondheim, who gave me an insight into the process of structuring, which he analogized to completing a puzzle. ... I must say that that analogy stuck in my head, because getting from page one to page 300 -- and interspersing multiple narrative lines into a cohesive whole -- really is very puzzle-like, and challenged me in a way that I hadn't been challenged before." He adds that he often kept the actors from his Jesse Stone movies in mind as he wrote.

"I always had Bob's voice in my head [too]," he says. "Because it was so familiar to me -- and because we had written together -- I had a good idea of how he wrote and what his style was. But ... whenever I got too far afield, I could feel my wrists being slapped by him."

And although he had a comprehensive knowledge of Parker protagonist Jesse Stone -- born of his efforts adapting Parker’s own works for the screen -- Brandman says he still worried about "trying to... follow in Bob Parker’s footsteps."

"We had been great friends and colleagues for some time ... . I had a very profound knowledge of Bob and his work. ... I was a huge fan before I ever even got to work with him, and I know that the keynote or the cornerstone of what he did was that he made it all seem so effortless -- and what we always discussed was how difficult it was to make something appear to be effortless. So inheriting that was somewhat daunting, and I certainly insisted that I audition for it before I ever would commit to it."

To see how the process looks from a different perspective, I asked Parker's wife, Joan, about the "audition process" involved in choosing her late husband's literary successors (another "continuator," Ace Atkins, will publish a brand new Spenser book next spring).

What exactly was she looking for when she scanned hopeful authors' 50-page proposals? Did she seek a skillful imitation of Parker's work -- or a lively adaptation, perhaps in a slightly unfamiliar voice?

"Well, that's a good question, because it's a challenging process for us -- the family," she says. "On the one hand, you long to hear Bob's voice -- but then you remind yourself that you're never going to hear his voice again. [Ultimately,] while I certainly wanted an echo of Bob's voice, I was looking for some indication that the writer would infuse the characters with his own perspective, [maybe] tweak them in a way that would add another dimension."

Asked if she had had any doubts at all about the continuation of her husband's series, Mrs. Parker issues a resounding "no." "In fact," she says, "it's thrilling to me that these wonderful characters will live on, even though we've lost Bob." She's already read Brandman's new novel, and thinks it's "magnificent."

Score one more for the continuator.