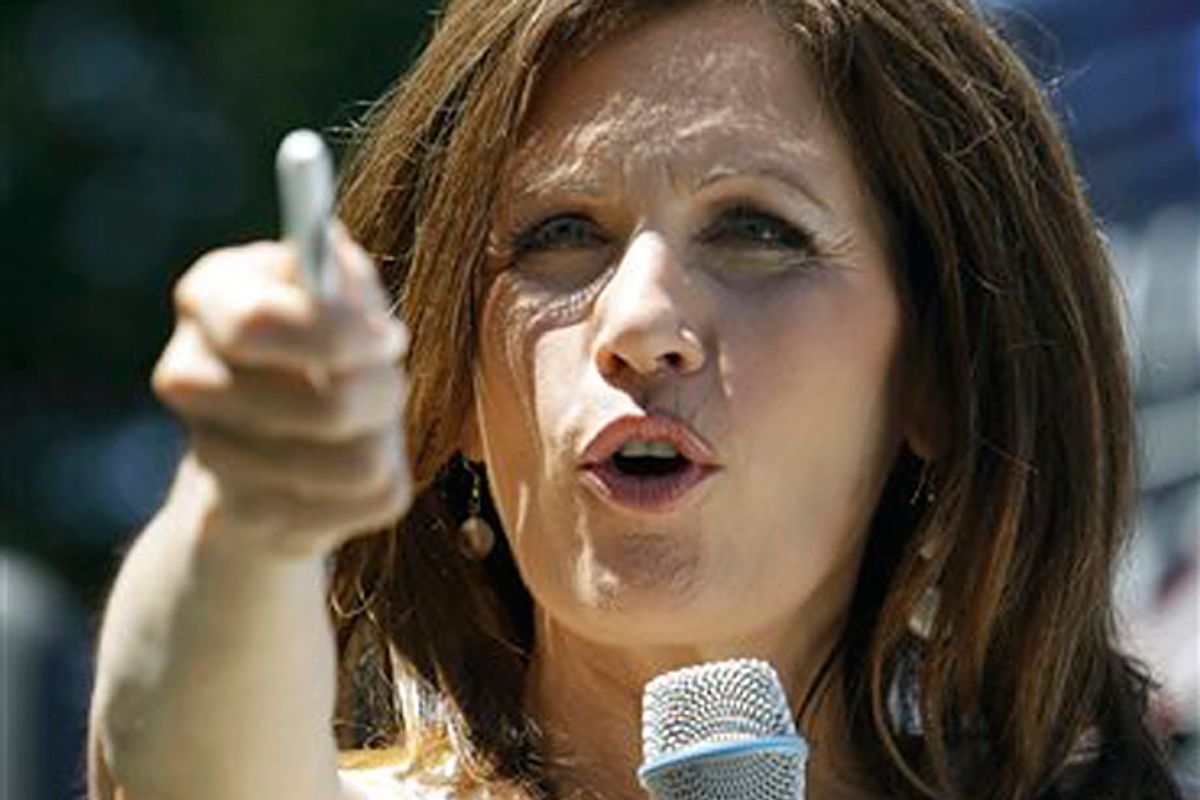 FILE - In this July 25, 2011, file photo, Republican presidential candidate Rep. Michele Bachmann, R-Minn., speaks during a rally at the Delaware County fairgrounds in Manchester, Iowa. Same-sex marriage might seem like a straightforward issue: You're for it or against it. Yet for the field of Republican presidential hopefuls, it's proving to be an awkward topic as public attitudes change and more states legalize gay unions, the latest being New York. (AP Photo/Charlie Neibergall, File) (Charlie Neibergall)
--

The New Yorker's Ryan Lizza got what appears to be phenomenal access to the Michele Bachmann team and came away with a very good profile that goes beyond "Bachmann says nutty things" to a far more useful explanation of the nutty things Bachmann believes.

Bachmann's spiritual gurus include 1970s evangelical thinker Frank Francis Schaeffer, who was opposed to the Renaissance and went sorta nuts after Roe v. Wade, advocating for violent overthrow of the government and claiming that the elites were poisoning the populace with psychotropic drugs in the water supply.

Sara Diamond, who has written several books about evangelical movements in America, has succinctly defined the philosophy that resulted from Schaeffer’s interpretation: “Christians, and Christians alone, are Biblically mandated to occupy all secular institutions until Christ returns.”

Bachmann was approvingly mentioning the "profound influence" Schaeffer had on her as recently as this spring, and she told the Star Tribune in 2005 that she was reading a "wonderful" book called "Total Truth," by a Schaeffer follower and prominent creationist named Nancy Pearcey.

And there is her Oral Roberts University professor John Eidsmoe, with whom Bachmann  collaborated on a book about how America is a Christian nation founded by Christians:

When Biblical law conflicted with American law, Eidsmoe said, O.R.U. students were generally taught that "the first thing you should try to do is work through legal means and political means to get it changed."

Eidsmoe later got in trouble for addressing a white supremacist organization and celebrating "Secession Day" in Alabama and arguing that "Jefferson Davis and John C. Calhoun understood the Constitution better than did Abraham Lincoln and Daniel Webster."

Then, in the late 1990s, Bachmann began reading David A. Boebel, an actual John Bircher Society member and minister who wrote in insane pamphlets for crazy people with names like "Communism, Hypnotism, and the Beatles."

Plus, Bachmann recommended a Robert E. Lee biography by a guy named J. Steven Wilkins, who ... well, he defends the Confederacy, and slavery, because the South loved God and the North didn't.

In his chapter on race relations in the antebellum South, Wilkins writes:

Slavery, as it operated in the pervasively Christian society which was the old South, was not an adversarial relationship founded upon racial animosity. In fact, it bred on the whole, not contempt, but, over time, mutual respect. This produced a mutual esteem of the sort that always results when men give themselves to a common cause. The credit for this startling reality must go to the Christian faith. . . . The unity and companionship that existed between the races in the South prior to the war was the fruit of a common faith.

For several years, the book, which Bachmann’s campaign declined to discuss with me, was listed on her Web site, under the heading "Michele’s Must Read List."

So! That's just the bits of the profile dealing with Bachmann's spiritual and ideological mentors and influences. I didn't even paste the amazing Marcus Bachmann color or the tale of her horrible religious charter school or the many stories of how much Bachmann lies about her own background -- go read the whole thing!

Even in a post-Glenn Beck world where far-right extremism has become fairly normalized and occasionally embraced by a Republican Party that used to at least act embarrassed about its neo-Confederates and John Birchers and straight-up theocrats, Bachmann's ideological background is both radically anti-American (in the sense that America is a pluralist nation founded on Enlightenment values and not a pro-slavery Christian theocracy) and way, way outside the "mainstream." She's not just a hard-right-winger -- and not just a slightly dim "nut" -- but a full-on fringe character, a bigot following a bizarre strain of born-againism that even your average American evangelical would find too conspiracy-obsessed and ahistorical to be palatable.

Meanwhile, Newsweek puts this incredibly, incredibly generic Bachmann piece on the cover (the entire thing, summed up: Michele Bachmann is doing well in Iowa but sometimes she says funny things and her critics say she is extreme) with the crazy-eyes photo, but the NewsBeast actually ran a much more illuminating story on Bachmann's ideology by Michelle Goldberg -- the piece where I first read about Bachmann's links to Schaeffer and Eidsmoe -- back in June, and I don't think that one was even in the print magazine?