Our nostalgia is killing us

As nostalgia becomes the lens through which we view the culture, are we losing our appetite for innovation? 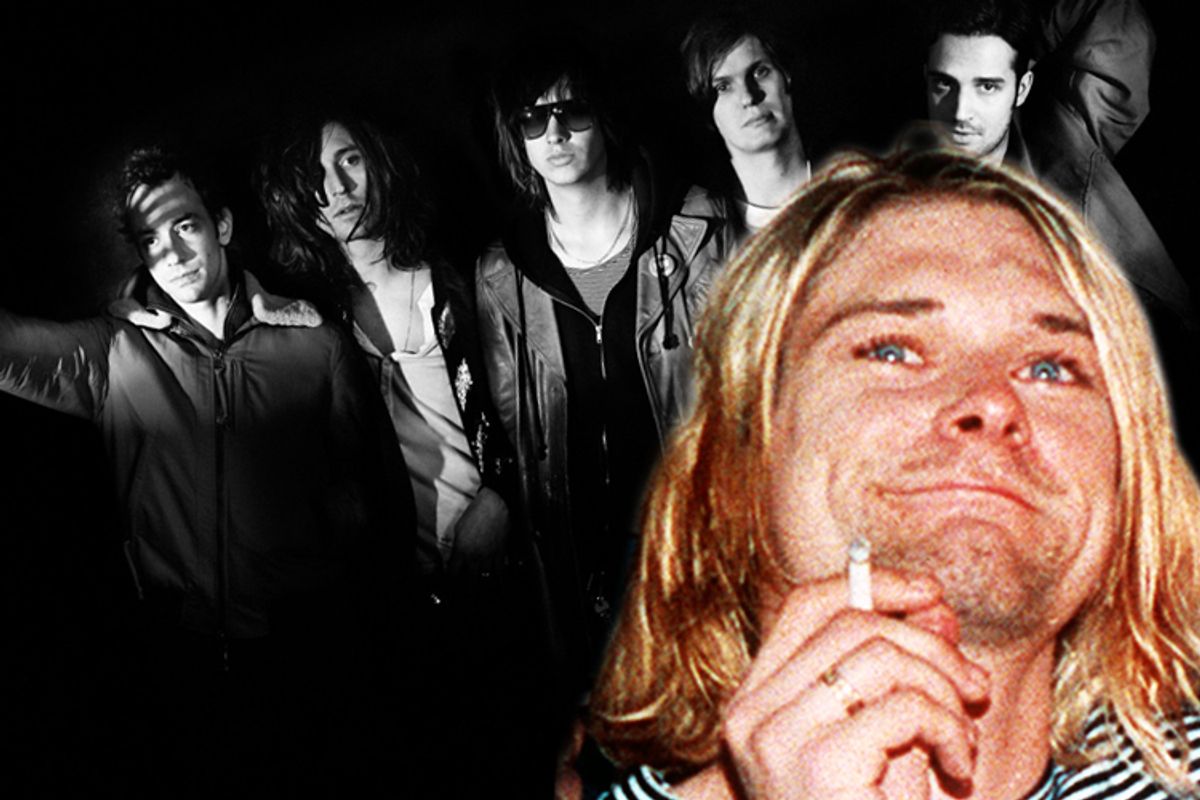 In the last couple weeks, a slew of cultural institutions have celebrated birthdays -- from MTV (now 30) to Nirvana’s "Nevermind" (about to turn 20) to the Strokes’ famously disaffected "Is This It" (soon to be a youthful 10). Other artifacts have been rebooted or revived ("Beavis and Butt-Head," "Clarissa Explains It All"), or combined, Voltron-like, into new-old organisms (the boy-behemoth NKOTBSB, which unites the grown men of New Kids on the Block with the grown men of the Backstreet Boys).

An "anniversary edition" of U2’s "Achtung Baby," now a ripe two decades old, is being released in five different iterations (vinyl, CD, DVD and "digital options") this fall; "Pearl Jam Twenty," the Cameron Crowe-directed homage to Pearl Jam’s first 20 years, will premiere on PBS in October. The detritus of the early 1990s has gathered into something that feels like a wave. Film remakes, reunion tours, faux-vintage-tees: Seduced by the familiarity of yesteryear, we cheerfully reconsume it all.

Turns out it still tastes sweet.

But while we’re tugging on our party hats and plugging in the boombox, a parallel narrative is finding its footing. Authors like Carl Wilson, writing about Gen-X’s forsaken aversion to nostalgia in the New York Times Magazine, and Simon Reynolds, whose new book, "Retromania," astutely indicts the culture of commemoration, are making worried faces. This kind of compulsive reflection doesn’t always bode well. A culture so dedicated to eating its own tail, after all, will eventually choke.

For me, nostalgia almost always feels shameful, even when it also feels good. It’s a thing you engage in after accidentally consuming too many vodka-sodas: You smack off all the lights in your apartment, slump over in some dark corner, and mentally eulogize all the people and places that don’t exist for you anymore. It feels like a private, humiliating indulgence -- toxic yearnings for a misbegotten youth! -- that should be tempered, not encouraged. Getting caught gazing wistfully at an old mix tape (or, worse, a current Facebook profile) is innocent enough, sure, but it can also be legitimately debilitating. At the very least, it slows you down.

Still, this kind of retroactive anointment is hardly new -- every generation eventually trumpets the superiority of its own relics. Getting older almost always means making lesser investments in art. Our heated affairs with albums and movies and books are eventually -- inevitably? -- supplanted by dynamic, two-sided relationships with other human beings (bosses, spouses, children, neighbors); that’s both the best and the worst thing about growing up.

So maybe we’re only nostalgic for old things because we can’t relate to new ones in the same way. It’s possible, after all, that I will never love a song as much or as purely as I loved "Losing My Religion" in 1991, when I was 11 years old and couldn’t even begin to unpack what I was hearing: those defeated lyrics, a swell of strings, that high, lonesome mandolin. It sounded like nothing I’d ever heard before, because I’d hardly heard anything. Context couldn’t dampen my elation.

But what does it mean when nostalgia (and a nostalgia built on adolescent naiveté, at that) becomes the status quo, the default lens through which we process everything? Social theorists have long declared the monoculture dead -- we’re all lost in our own private conversations now -- so it’s possible that what’s actually being memorialized over and over again is the end of the universal moment. When was the last time everyone heard the exact same thing at the exact same time?

In response, those old memories become communal commodities. Instead of chatting about the weather, we relate to each other by talking about something from our childhood that we experienced in tandem. Whether or not the artifact in question is still worthy of reconsideration -- has MTV really accomplished so much since we last toasted its longevity in 2006? Has "Nevermind" become any more culturally significant since 2001, when it had its 10th anniversary? – is becoming less and less relevant. What matters now is the shared experience, trotted out again and again.

The danger, though, is that we become so blinded by the comfort of the past that we lose our appetite for artistic innovation, and stop demanding it. Ten or 20 years ago, the nastiest thing you could call an artist was derivative (and that insult was doled out with such frequency it became a limp critical trope). These days, the rubric of novelty is rarely employed, and "Is this doing something new?" isn’t a de facto critical question. Artists are judged, instead, by how successfully they integrate the past, either by fusing it with something else, or dismantling it to the point that it’s nearly (but not entirely) unrecognizable. Regurgitating one’s predecessors isn’t a uniquely contemporary phenomenon, but now that artists have access to everything all the time, it’s become an awful lot easier to pilfer at will. As Reynolds writes, "It can become a real struggle to recall that pop hasn’t always repeated itself and that in the not-so-distant past it has produced, repeatedly, something new under the sun."

It’s hard to say, specifically, what it is about 2011 that’s allowed nostalgia to flourish so suddenly and completely. It seems possible that our culture has become so accelerated -- so transient and disposable -- that our unchecked longing and veneration for the past is actually just an attempt to slow things down. Are we manically memorializing art because we’re afraid that we’re going to lose it to technology?

Wilson, at least, is optimistic about the current wave. He believes that nostalgia -- particularly when employed by Gen-Xers, an inherently anti-sentimental generation – can be useful, not just noxious. "There’s a model here for nostalgia that doesn’t wish away the distance between past and present; doesn’t romanticize the past as tragic and heroic; and doesn’t simply trivialize it (as so much 1980s nostalgia did) as trite and silly," he writes.

I hope he’s right. At its best, nostalgia helps us remember (and snicker at and respect and learn from) the past. But it’s troubling to think we could get stuck there -- that we could lose our ability to forge new and significant relationships with art, and that we might no longer be able to use those connections to understand each other. Because that sounds counterproductive and, above all, lonely.

Amanda Petrusich is the author of "It Still Moves: Lost Songs, Lost Highways, and the Search for the Next American Music."