The making of a great art school 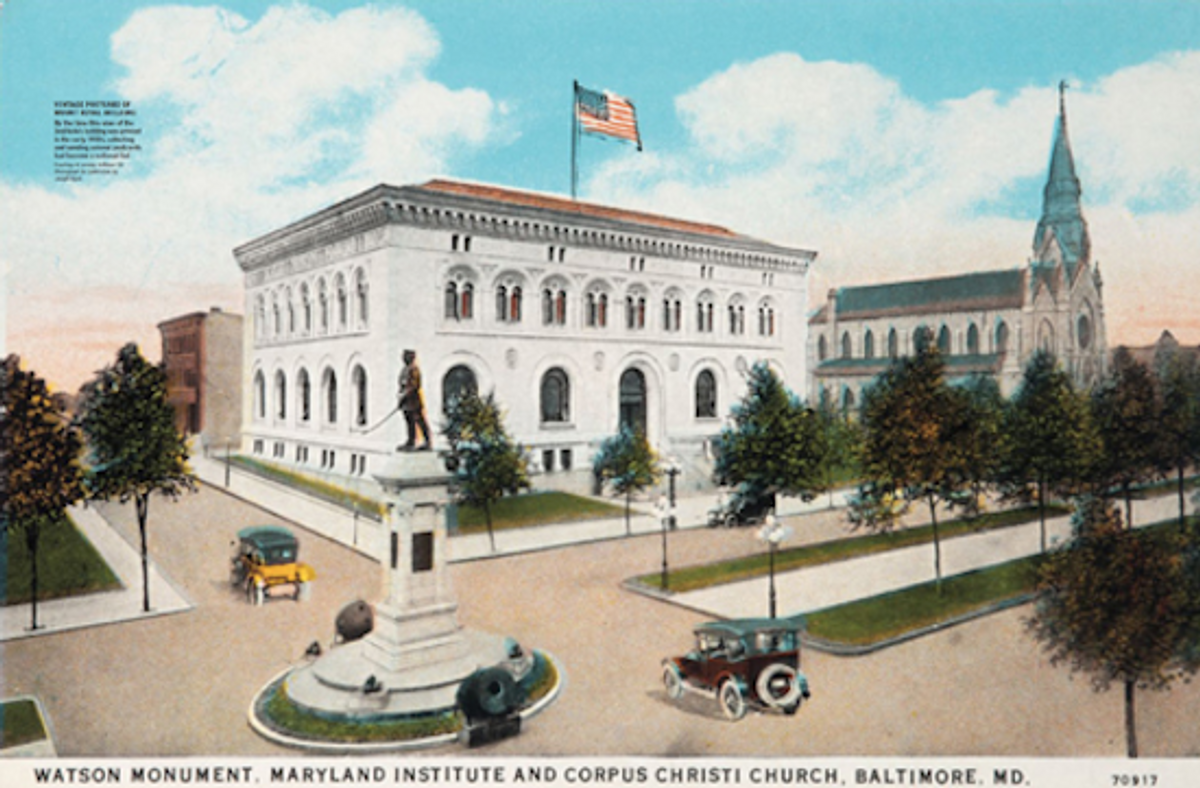 To commemorate the Maryland Institute College of Art's (MICA's) history from 1825 to 2010 -- a lot of years -- the college published what is decidedly an exhaustive and elegant visual history. "Making History / Making Art" by Douglas L. Frost, designed by J. Abbott Miller and Jeremy Hoffman, is an accessible portrait of an institution that came to prominence with the Industrial Revolution. I asked Frost how the narrative of an art and design school became such a page turner. His responses follow:

As author of this tome, what did you learn about MICA that you had not previously known?

I always knew there had been real standouts on the Board of Trustees since the 1820s. However, I did not realize how deep the bench was, nor the depth of their commitment.

It was only after reading thousands of pages of annual reports and Board meeting minutes that I appreciated the complexity of forces beyond the Board's control -- and the potential consequences. The Fire of 1835 -- that put Maryland Institute (MI) out of business for more than a dozen years -- on top of the bank failure that same year, leading to seven years of depression -- are examples. The Board responded by constructing the Great Hall -- "the largest clear space in America" noted the Scientific American -- to serve as the city's educational/cultural centerpiece. Resilience became a characteristic at MICA.

The Board navigated through the Civil War. But the change in public taste after the War (combined with a severe decline in the economy) made the '70s a roller coaster decade -- in spite of the fact new art institutions were forming! Things looked pretty bleak in 1878 for Maryland Institute. Would it survive?

Instead of throwing in the towel, the Board decided to check out sister institutions. Trustees started by visiting top counterparts in the North East in 1879-80. Additional trips to the Mid-West and Europe a few years later re-enforced Maryland Institute's core values and stimulated the Board to adopt and adapt.

What about MICA set it historically apart as an art school?

When Maryland Institute began so did the Industrial Age on the East Coast; the chief emphasis was on inventions, designing items related to manufacturing, construction and building the city. But from the beginning the fine and applied arts had a place at the table, establishing a School of Drawing in 1826, its first year. Thomas Sully's daughter attended the first painting class at MI along with two Harvard professors and others.

After Seneca Falls 1848 (the emergence of women's rights), MI established a female school for fine and applied arts (1854). That program was so good, the men demanded one exactly like it. Enrollment shot up.

A quarter of a century later the Board visited 16 art schools in the North East, Mid West and Europe and announced the establishment to Schools of Art and Design. While all art schools had unique characteristics, they also had a lot in common. MICA was very much in the mix, closest in many ways to Cooper Union.

Skip to the 1960s: Eugene Leake, president of MICA, a painter, focused on the fine arts program. (Design was not his priority.) Fred Lazarus and Ray Allen sought balance. In 1994, with digital technology a reality in countless ways, said Allen: "This is the most exciting time for artists since the Renaissance." He appointed Ellen Lupton, Abbott Miller, Julian Allen to the faculty and put MICA's design program on the map. The number of graduate programs has grown significantly. It is an evolving scene and MICA is right up there with RISD, CalArts, Chicago, SVA, and others writing tomorrow's history.

Reading institutional histories can be as exciting as watching standing water. What is it about this richly illustrated book that debunks that notion?

First, we looked at a number of institutional histories to get ideas on organization, content, etc. Several seemed like yearbooks with a goal of getting every club pictured. From the outset our focus was the larger context in which Maryland Institute existed. Our story evolves with -- is part of -- the nation's: such as the symbiotic relationship MICA had with the B&O RR connecting America. MICA's tale is stitched into the fabric of America and the times, from the 1820s onward. Engaged. There's nothing dull about the history of the United States. Why should institutional histories be?

Books are rumored to become extinct. How does your volume subvert that idea?

Our goal, from the outset, has been to get this book into the hands of a growing audience. To that end, we have kept the price within reach. We've been criticized for having it available for less than $100 (we put the cost at $65). Better to sell a lot of books at a lower price than to sell a few at a higher price only to end up with boxes of books unopened in some warehouse.

Is there one quotation in the book that speaks directly to you?

After receiving an honorary degree from MICA in 2001, Marcella Louis Brenner (90+ year old widow of abstract expressionist Morris Louis, understood what the life of an artist was like) spoke to a hall full of students and faculty. Her remarks ended with the following salute: