It's a sword of Damocles over our banking system, and it looks more and more troubled as time passes 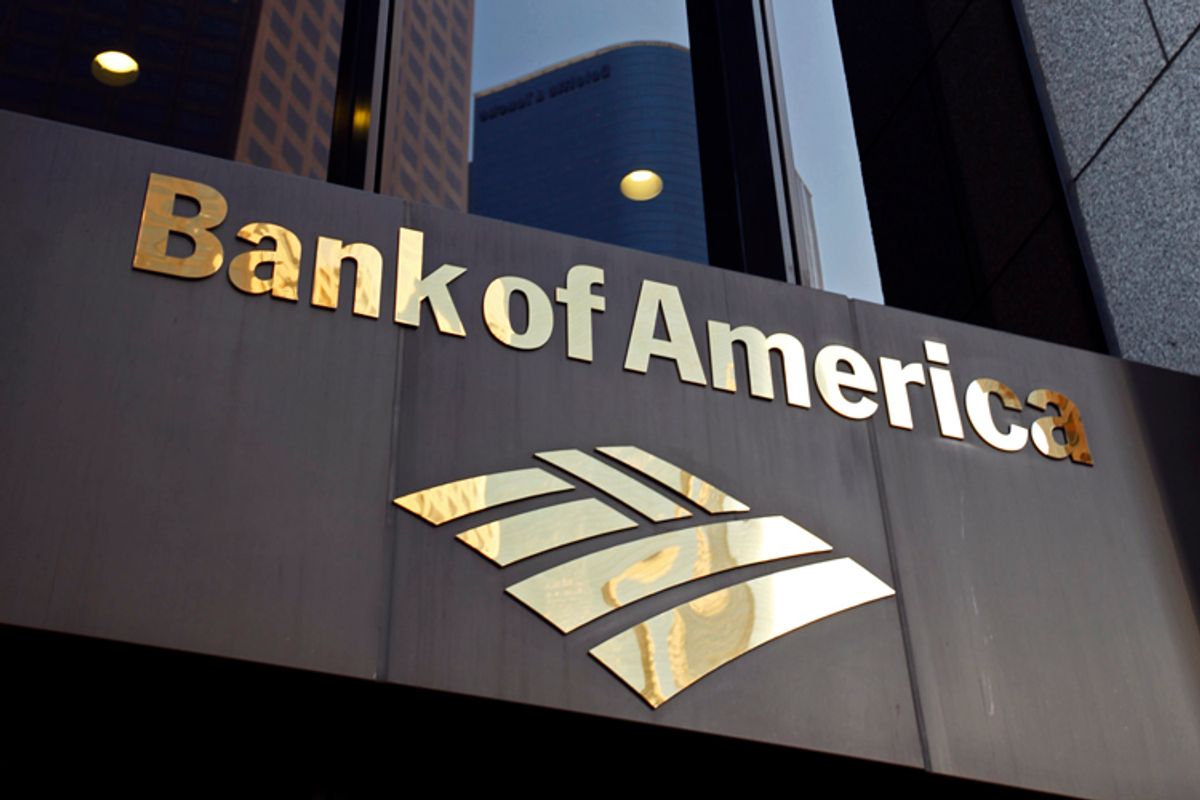 One of the most mesmerizing aspects of the market rout of the last week is the decline in Bank of America's stock price. It fell a stunning 20% yesterday, and even with a strong rebound today, it closed over 22% below its level of two week ago. That puts it well below half of the book value, which is a serious vote of no confidence. An even more troubling sign is that its credit default swaps, which strongly influence the bank's cost of raising new funds in the bond market, have also shown considerable decay.

Yet officials at the Financial Stability Oversight Council, which had an emergency conference call last night, as well as many equity analysts believe that banks in general, and Bank of America in particular, have good liquid reserves and are in a much better position than they were going into the crisis.

So why is Bank of America at risk? The short answer is that it may be insolvent even if it is liquid. Consider two individuals. One makes only $30,000 a year but spends $50,000. He inherited 20 Picassos worth at least $1 million each even in a terrible art market. He has arranged to sell one which he figures will cover his expenses for a very long time. However, the buyer, who pretended to be from a reputable gallery, instead absconds with the painting. Until the owner sells a second painting, he is scrambling for cash. No one doubts that he will be money good, but he is having trouble raising the funds right now.

Consider a second individual. He makes $70,000 a year and his expenses are $60,000. But a friend lent him $500,000 personally to start a business, and that never got off the ground. They have a former written agreement, but the borrower pays no cash interest (his friend is treating the annual interest due as a gift under IRS rules). The note is due in five years but they plan to replace the old loan with a new one if he can't repay, which looks certain.

The lender gets in a financial pickle himself, and enters into agreement with Mr. Tough Collector to sell some assets to raise cash. Due to inartful drafting by his attorney, the $500,000 loan gets transferred to Mr. Tough Collector. So our hapless entrepreneur is going to face a shakedown by Mr. Tough Collector in five years, since absent winning the lotto, he looks unlikely to have $500,000, and will probably have to go bankrupt.

Bank of America's situation is a lot like that of the borrower who has a looming obligation he can't meet. But unlike having a well identified big debt to pay down the road, the financial behemoth faces large but uncertain in size payments in the future thanks to pending and growing lawsuits to recover alleged damages resulting from the misdeeds of its acquisition, Countrywide. The current wave of litigation that has investors rattled results from Countrywide telling investors that the loans they were packing into securities were much better than they really were.

The Charlotte bank tried to put most of that problem behind it by entering into a settlement for $8.5 billion, which if they can pull it off, will be the bargain of the century. But that deal is being challenged on multiple fronts, including by New York state attorney general Eric Schneiderman. It looks like that pact either will not go through or will be renegotiated substantially and cost Bank of America a good deal more.

Another blow landed Monday when it was sued by AIG for $10 billion, for the same sort of liability it was seeking to discharge in the settlement. If one investor thinks it is owed $10 billion on $28 billion of mortgages,. or 35%, when the old settlement deal for $8.5 billion was for only about 3.5% of the total amount of bonds, that alone shows how much more Bank of America might have to shell out.

And that's only one risk Bank of America faces. The meteor-hitting-the-financial-system sort of lawsuit, which no one has dared to launch, would attack originators and packagers like Countrywide for failing to transfer mortgages properly to the mortgages securities in the first place, in violation of their own contract. This astonishing and apparently widespread "securitization fail" is leading to more and more underwater homeowners successfully challenging foreclosures in court. And it is also leading to banks undermining the rule of law. The robosigning scandal of last fall is only the tip of the iceberg. Both Schneiderman and Delaware's attorney general Beau Biden are investigating conduct by mortgage securitizers on a broad basis. Schneiderman's objection to the Bank of America settlement notes:

The ultimate failure of Countrywide to transfer complete mortgage loan documentation to the Trusts hampered the Trusts’ ability to foreclose on delinquent mortgages, thereby impairing the value of the notes secured by those mortgages. These circumstances apparently triggered widespread fraud, including BoA’s fabrication of missing documentation.

This language suggests that he may be considering legal action against Bank of America over this issue.

And on top of that, Bank of America has roughly $125 billion of home equity loans and other second liens on its balance sheet. Most of these will be worth nothing in a foreclosure but bank like BofA have taken only relatively modest writedowns because they are applying strong arm tactics to borrowers to persuade them to pay (in preference to the first mortgage which is actually senior). And for home equity loans, which are the overwhelming majority of the bank's second liens, the banks can count a loan as current even if the borrower sends only a partial payment (this isn't the case with first mortgages). So they are a great vehicle for extend and pretend.

The danger of BofA lumbering on if it is truly insolvent is that its counterparties and creditors are effectively throwing good money after bad. The poster child of this phenomenon is Greece, which virtually all economists agree is going to have to default on its loans or have them restructured. But since May of 2010, the Eurozone supervising adults have engaged in a succession of rescue packages, the latest of which was economically equivalent to a restructuring, but far short of what was necessary. The ultimate result will be bigger losses than if the problem were dealt with sooner.

Banking expert Chris Whalen, in a Reuters opinion piece today, argues that Bank of America needs to be put into Dodd Frank resolution because it threatens other banks and the economy. But no one has ever used the new Dodd Frank approach, and both the Bank of International Settlements and the well respected Institute for International Finance have said Dodd Frank won't work on overseas operations. This is a major problem, since the Bank of America subsidiary has major trading operations around the world. Merrill was too big to fail before the crisis, and Dodd Frank's only viable approach for dealing with major dealer firms is to get them sold, rather than to resolve them.A former Treasury official has also expressed serious doubts. But no banks look like obvious Merrill buyers, ex a subsidy, and it's hard to imagine subsidies will be easy to arrange with the Tea Party on an anti-spending and anti-Federal Reserve warpath.

So Bank of America is a sword of Damocles over the banking system, and looks more and more troubled as time passes. Yet the history of the crisis and its aftermath suggests that the officialdom is loath to intervene unless forced to. And we know how well that turned out the last time around.