How new media, old media and rampant unemployment combined to stoke the worst riots Britain has seen in years 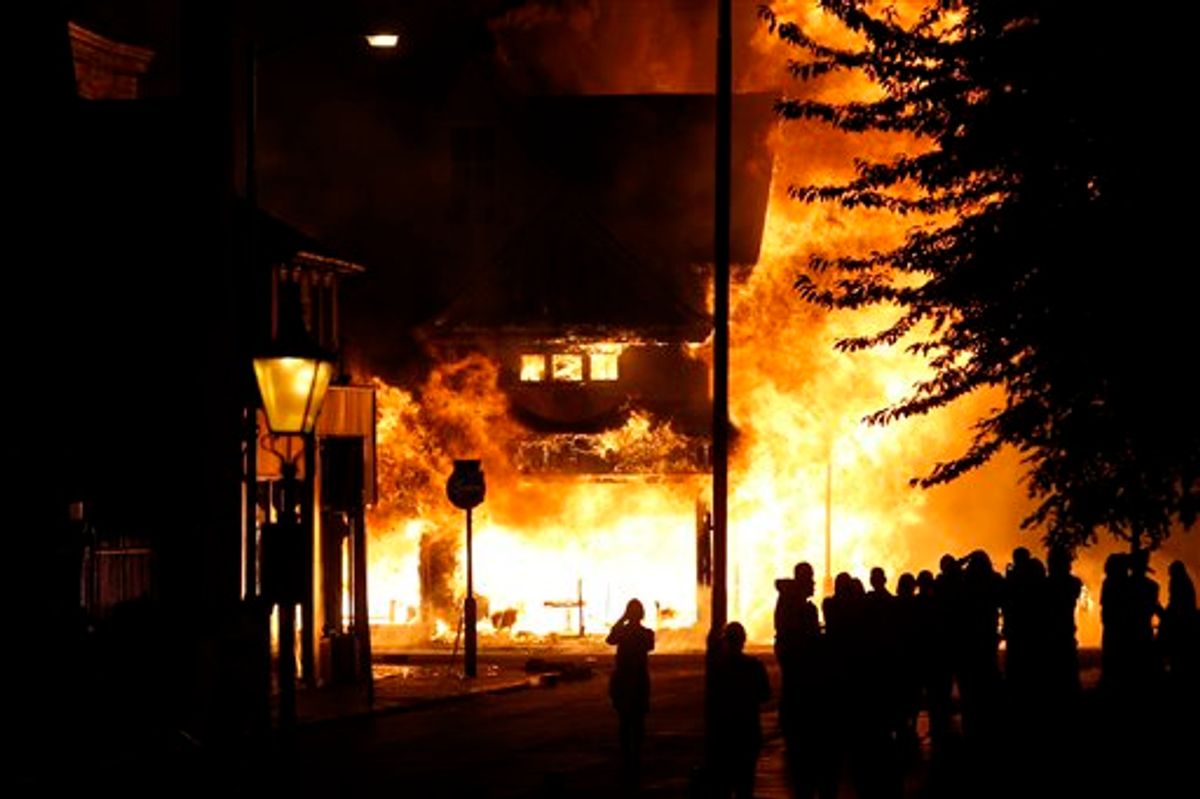 A shop is set on fire as rioters gathered in Croydon, south London, Monday, Aug. 8, 2011. Violence and looting spread across some of London's most impoverished neighborhoods on Monday, with youths setting fire to shops and vehicles, during a third day of rioting in the city that will host next summer's Olympic Games. (AP Photo/Sang Tan) (AP)
--

LONDON, United Kingdom -- I knew we were in for a rough night here in Stoke Newington in the London Borough of Hackney when my wife called me at 5 p.m. from Sainsbury's, our local supermarket, to say she was in a lock down. They were shuttering the place and the police were telling her trouble had already started outside the Hackney Town Hall. The cops told her to go home and stay off the streets.

I took her call as I was walking into the local library to return a book. Inside, the librarians were watching a BBC live feed on their computers of action a mile and a half away. One of the librarians explained he lived over there.

This morning I awoke to learn that half a dozen or more neighborhoods in London -- north to south, east to west -- saw outbreaks of violence, looting and arson. In other cities around the country -- Birmingham, Liverpool, Leeds and Bristol -- there were also reports of youth confronting police.

This rioting is something Britain has not seen in recent years. It is a totally new expression of anger from what sociologists would call the "underclass." That said, there are familiar elements in the build-up to last night's anarchy that might help you understand it a little.

First, the chronology: The tension began to boil over last Thursday when police shot and killed a young black man named Mark Duggan in Tottenham, a predominantly Afro-Caribbean and African immigrant neighborhood in north London. In the mid-1980s, Tottenham was the scene of terrible race riots which culminated in a policeman being hacked to death by a group of men armed with machetes. Saturday night, following a disappointing visit to the police by Duggan's family and community leaders, a protest about the incident turned violent.

When the smoke cleared on Sunday morning it was obvious that the violence was not about the police and racism -- as it had been in the 1980s. The Duggan family were appalled by what had happened, much of it directed against shops owned by black and immigrant businessmen. Back in the 1980s, community leaders were harshly critical of the police and the government. Local black politicians used the riots to point out the institutional racism in the police force. Now the local member of parliament, David Lammy, son of Afro-Caribbean immigrants, led the criticism of the rioters.

Sunday night low-level looting spread to other parts of north London not far from Tottenham. The violence's tenuous relationship to the Duggan incident disappeared. The rioters were a heterodox mix of black and white youths who did not come out on the street to demonstrate against the police. They hit the streets to take what they could: electronic goods and sneakers, and then trash the shops they had just looted.

Then last night things exploded. Why?

Partially it's media, old and new. After getting my wife's message I left the library and raced home to watch the 24-hour television news channels. Sky News had scrambled its helicopter and was showing a raw feed of action in Hackney. Police were clearing Mare Street, the main shopping street. As the crowds dispersed into the side streets, cars and dumpsters full of garbage were being set on fire. The police were not grabbing kids and arresting them, they were trying to clear space and hold it.

Meanwhile kids were able to evade police by texting each other meeting places where law enforcement was absent.

It isn't hard to imagine that young people from the same social background around the city watching those pictures and getting texts from people they know in Hackney decided it was worth the risk of arrest to go out to the local shopping area and take what they wanted.

They seem to have been right. Prime Minister David Cameron said that there were 6,000 police on the streets of London last night. That sounds like a lot but London is a vast city. A few hundred people looting in Ealing in the west, a few hundred in Clapham in the south, a few hundred more in Croydon at the city's edge, a few hundred more in Hackney, and three or four other places, all these neighborhoods separated by long distances -- five to 10 miles. You can see how thinly stretched law enforcement was.

That explains why things spread so quickly last night.

The underlying causes of the rioting are difficult to say with certainty but one key fact must be considered: youth unemployment.

The rioters were overwhelmingly teenagers and kids in their 20s. About 20 percent of 16-24 year olds in Britain are unemployed. That figure is much, much higher on council estates -- the British term for housing projects. (You can leave school at the age of 16 in this country). Unemployment statistics in Britain are sadly vague, but a reasonable estimate of youth unemployment just in Hackney is 33 percent. (Those attending college or performing any form of unpaid apprentice work are considered to be employed.) There don't seem to be any statistics for youth unemployment on council estates -- as I live in the neighborhood I would say well above 60 or 70 percent is a good guess.

The reason I say this is that unlike in Paris or New York, London doesn't wall its poor people into ghettos or banlieues. There are streets in Hackney where very ordinary row houses cost a million bucks but on the corner there is a council estate. The kids who grow up in the million dollar houses go to college and then on to jobs; many of those in the estates leave school at 16 and find no work. If a third of Hackney's youth is unemployed and the middle-class kids are all going on to higher education, the segment of the population pulling the unemployment figure up must come from the estates.

When there are that many young men with nothing to do and no money to spend, it doesn't take much to set off violence. The immediate flash point -- in this case the death of Mark Duggan -- is quickly forgotten. A group hysteria takes hold.

Having covered riots in Northern Ireland for many years I can say with certainty that this kind of hysteria can take time to burn itself out. With TV cameras focused on them and smartphones at the ready, it may be a few nights yet before the fever subsides. There is very little the police can do.

What happens after the rioting subsides is difficult to predict -- entry level jobs are in short supply these days -- and as the government's austerity measures begin to bite here, it's not likely to get better any time soon.

But the government has to be seen to be doing something. British Prime Minister David Cameron flew back to London from his holiday in Tuscany early today to deal with the situation. He told reporters that all police leave had been canceled and that 16,000 officers will be on the streets of London tonight. Parliament has also been recalled from its recess to hold a one-day emergency debate on the rioting.