Politico's star opinion columnist notices wealth disparity, neglects to come up with suggestions to alleviate it 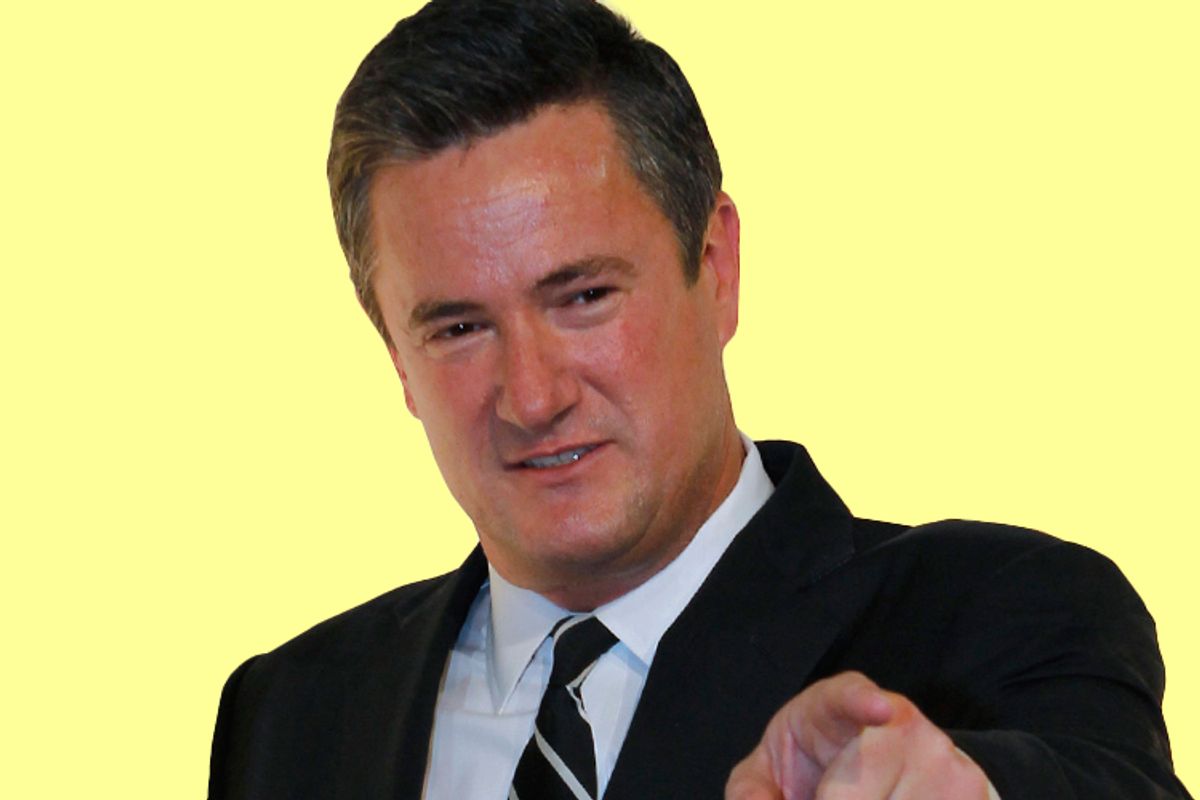 This is Joe Scarborough's opinion column that he wrote and that Politico paid him money for the privilege of publishing, today. It is about how the American dream is in trouble because when Joe Scarborough was a kid his parents used to drive him past rich people's houses and tell him if he worked hard he could live in a rich people house, but now the rich people houses make Joe Scarborough sad, when he drives past them (or drives into the garage of the one he himself lives in, as a rich person).

Today, I still remember those Sunday morning trips to church -- not because my parents were striking out at the inequities of a system that created such economic winners (them) and losers (us) -- but because of what my mom would say as we drove past the glorious homes of doctors, bankers and lawyers.

"You see that house, Joey?"

"If you work hard in school and keep fighting every day to improve yourself, you can live in a place like that when you grow up," Mom would say with admiration in her voice.

But that was 1970, which everyone now remembers as the golden age of the American dream, because, unlike now, Joe Scarborough was still a little kid. Ah, 1970! America's Renaissance!

Sadly we're no longer living in sepia-toned 1970 America. Now, things are bad, because ... I think because of our massive and growing wealth disparity?

The article showed evidence that CEO bonuses were at their highest levels in the 33 years the data have been recorded.

"What's counterintuitive," according to a compensation expert interviewed by Business Week, "is that the highest level of funding for bonuses is occurring in the heart of the recession."

"Counterintuitive" seems to be a bit of an understatement. Shortsighted and stupid better describes a trend that cannot be seen as good for the long-term health of America's economy.

While these income disparity trends were bad under George W. Bush, they have only gotten worse over the last three years.

Since 1970, executive pay has increased 430 percent while workers' wages have crept up at a pace that barely kept up with inflation. The average executive's pay has jumped over that time period to 158 times that of the average worker's pay in those companies. It's no wonder that the top 0.1 percent of income earners get richer by the day while millions of Americans are seeing their situations get worse.

This is not John Wayne's America. This is Gordon Gekko's America.

Ha ha, so Joe Scarborough is a socialist, now? I mean, this is basically socialist talk. What should we do about this massive and disgusting state of affairs, then, Comrade Joe Stalinborough?

Mr. Scarborough forgets to get to that part of his opinion column, the "what should we do about this" bit.

In fact, I'm pretty sure that if the Duke faced one of these CEOs in a John Ford film, he'd kick some ass and force the leech to start treating his workers fair. And you can bet that my Republican father would be cheering him on from the front row of the theater.

That's not to say that Dad would ever want the government to step in and tell companies what to pay their executives. He wouldn't — not in a million years. But he would ask what became of the America that he knew, where working hard and playing by the rules always paid off.

This weekend I began to wonder, 40 years after those Sunday morning drives, whether parents across the country still embrace the American Dream with the evangelical fervor that made a 7-year-old boy sitting in the back of a Buick believe that in America, anything is possible.

And then that's the end of the column. For real. "Dad would say keep the gubmint outta my business but where oh where is the America I used to love, from 1970? Something to think about, right? Oh well, bye!"

Writing a column is so easy! Diagnose a problem, talk about dad, have a beer, watch TV. Done.