The market is now more powerful than the state 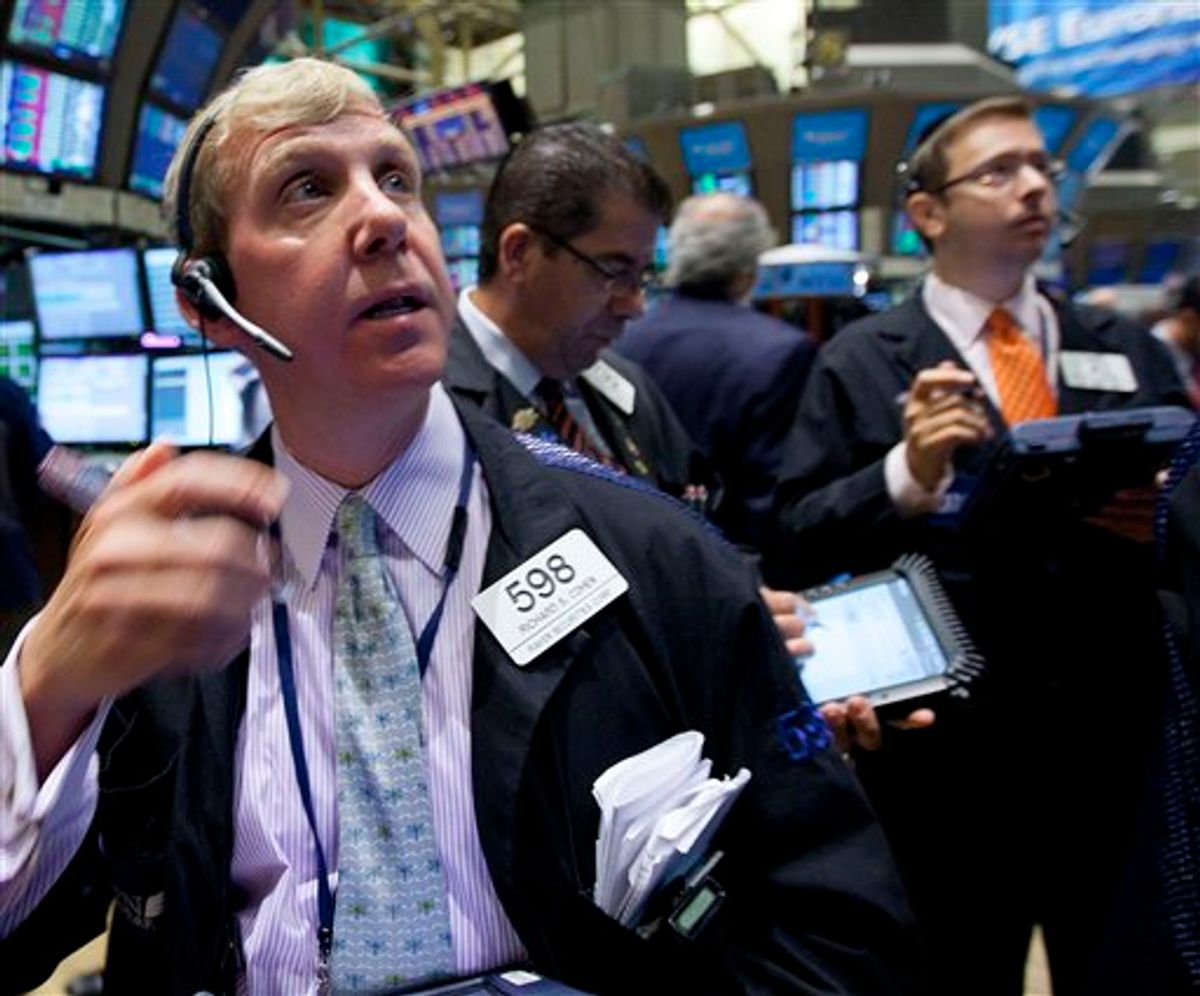 Here we go again. The plunging stocks. The banner headlines. The fear and the nausea as we stare into a deepening of the recession that never really ended. The latest lurch falls hard on the heels of the (Republican-) manufactured default crisis in Washington, and comes complete with its own entities too-big-to-fail -- nations this time rather than banks. But don't be fooled by the switch: The reason the struggling sovereigns of Europe are too-big-to-default is that they could take other nations' banks down with them.

The script is familiar by now. International finance officials pledge measures to calm the markets. But capital doubts the efficacy of the state and decides to kill off a little more of it, like a boy cutting off his aging father's hand. And what are we preterite souls left to do but open our browsers each morning with that sickly tinge of disaster anticipation we've become habituated to since Sept. 11 and stare at the Dow. The Dow, which the business press and the cable-news tickers have succeeded in grafting onto our brains as a national psychic thermometer, a number too important to ever take our eyes off of (what's good for business is good for you!). A number to be watched even as the president speaks to the nation, so that we can measure to the decimal point the market’s pleasure or displeasure at our elected leader's words.

Is that all we can do? As the philosopher and labor activist Simone Weil put it in the 1930s, "Our weakness may indeed prevent us from winning but not from comprehending the force by which we are crushed." At present that force is a financial industry that operates with impunity. Three years into a partial collapse of the global money system that has caused mass unemployment, no executives have been held publicly responsible. The banks that were too big to fail are larger than they were before the onset of the crisis. They do not lend to small businesses. And even the weak regulations that Congress managed to pass are being stymied and their implementation delayed by fierce lobbying and Republican defunding of regulatory bodies.

If the airline industry's recklessness and criminality led its planes to fall from the sky, putting a stop to air traffic for six months and causing a massive economic contraction, its executives would be imprisoned and the government would re-regulate it from top to bottom.

The only sane conclusion is to open our eyes to the fact that finance capital is now bigger than the state. Sovereigns are limited by territory. Capital is not. Thus it can engage in what is known as regulatory arbitrage, seeking out the markets with the fewest restrictions and playing governments off each other to compete for the most favorable -- defined as the most lax -- regulatory environment, much as sports franchises extort tax breaks from municipalities with threats of moving to another city. That Lending Tree TV ad that's been around for years promises "when banks compete, you win." Well, when governments compete for regulatory permissiveness, you lose. Behold the recent spectacle of the New York Democratic congressional caucus asking federal regulators not to enforce new controls over derivatives, the most speculative, destabilizing and profitable line in the business, because it could hurt Wall Street’s competiveness against foreign banks.

But don't worry, the media is on it! Over at the New York Times, Andrew Ross Sorkin is putting the latest crisis into perspective via a feature interview with none other than Henry Paulson! "Many of the Western democracies -- including the U.S. -- have a problem," the former Treasury secretary and head of Goldman Sachs tells Sorkin. "Voters want benefits they don’t want to pay for."

Greece, where the welfare state does seem to have gotten awfully fat, would seem a prime example. But remember, Henry Paulson ran Goldman when that company marketed a numbingly complex set of financial transactions to the Greek government that allowed it to hide its true level of indebtedness to bond investors by borrowing against the future revenues of its healthcare system. European banks continued to lend to Greece. Goldman made millions. And now Greece has sparked a sovereign debt crisis in the Euro-zone. This is what the culture of impunity looks like. Perpetrators are treated as wise men and common sense becomes the logic of destruction.

Which is to say noting of the substance of Paulson's comment. Here I was thinking our country's social fabric was being steadily frayed by a wealth gap that is now greater than many Central American nations. But no, it turns out ordinary voters just want too much and they don't want to pay for it. Listen. There it is: the voice of our new Leviathan. Not the state, as Hobbes envisioned it, but the market itself.

We must call this monster by its name.

Adam Haslett is the author of the novel "Union Atlantic." His story collection "You Are Not A Stranger Here" was a finalist for the Pulitzer Prize.