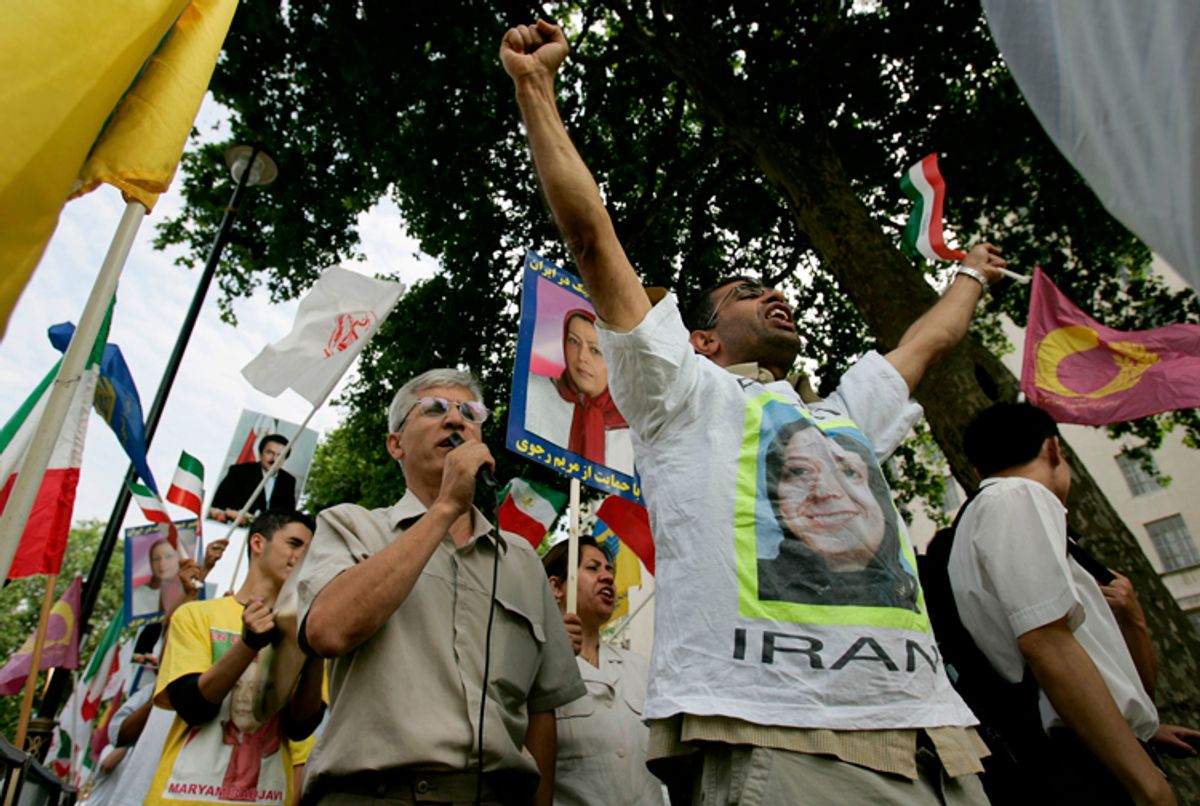 Supporters of the National Council of Resistance of Iran, the political arm of the Mujahedeen Khalq, take part in a protest near Downing Street in London
--

Given the supreme importance of the fight against terrorism and the terrible ramifications which ostensibly exist for providing material support to terrorists, it is puzzling to see prominent individuals within the U.S. political establishment openly lobbying for, and taking money from, an Iranian organization which is designated by the State Department as a terrorist group.

Mujahedin-e-Khalq (MEK) is an organization with a history of violent terrorism against Americans and others, and was a key strategic asset of Saddam Hussein during his brutal crackdown on Iraqi Kurds in the early 90’s. Despite being implicated in the deaths of numerous American and Iranian civilians, (and being designated as a terrorist organization by countries around the world for its actions) U.S. political figures such as Ed Rendell, Andrew Card and John Bolton are openly advocating for MEK and are in many cases receiving significant sums of money for doing so.

Supporting designated terrorist organizations, especially in the context of the indefinitely ongoing War on Terror, is something for which a great number of individuals in the United States are currently serving lengthy prison sentences. It seems to defy logic then that members of MEK, a group which has attacked U.S. interests all over the world, are able to stroll the halls of Congress and exercise significant financial influence over U.S. government representatives in order to achieve their objectives. Make no mistake, the MEK is no less “terrorist” than any of the other groups for which one can go to jail for merely having contact with. In addition to openly acknowledging to have killed thousands of Iranians, MEK is directly implicated in the deaths of American civilians and military officials in Tehran during the 1970’s, killings for which no MEK member has ever been brought to justice. As recently as 2007 the State Department had this to say about the organization which currently enjoys the open support of so many prominent figures within the U.S. political establishment:

"MEK leadership and members across the world maintain the capacity and will to commit terrorist acts in Europe, the Middle East, the United States, Canada, and beyond."

"MEK has also displayed cult-like characteristics…. members are also required to undertake a vow of "eternal divorce" and participate in weekly "ideological cleansings." Additionally, children are reportedly separated from parents at a young age. MEK leader Maryam Rajavi has established a "cult of personality."

"….. uses propaganda and terrorism to achieve its objectives and has been supported by reprehensible regimes, including that of Saddam Hussein."

Not only did they receive the support and patronage of Saddam Hussein; the MEK were instrumental in the massacre of the Iraqi citizens whom the United States purportedly fought the Iraq War to "liberate." MEK leader Maryam Rajavi had these words for her followers about how to deal with Iraqi Kurds during the 1991 crackdown: "Take the Kurds under your tanks, save your bullets for the Iranian Revolutionary Guards"; this is the same woman about whom Howard Dean said last March, "Madame Rajavi does not sound like a terrorist to me; she sounds like a president….We should be recognizing her as the president of Iran." The fact that U.S. officials are lobbying for the leader of a cult-like terrorist group with zero popular support in Iran (indeed, it is likely the only party in Iran with even less support than the regime) to become the next president of that country should surely be filed for future reference under the heading, "Why Do They Hate Us."

That an organization which is acknowledged to be involved in terrorism enjoys the open support of so many prominent figures in the U.S. political establishment is a prime example of the fundamental hypocrisy at the heart of the War on Terror. The fact that many of these individuals are receiving significant financial compensation in return for their support of MEK’s agenda is even more egregious; try and imagine the reaction if a non-favored terrorist group were using cash contributions to openly lobby the support of American politicians for its objectives.

What the U.S. relationship with Mujahedin-e-Khalq does is further clarify the inherent meaningless of the designation of individuals or groups as being "terrorist." For their perpetration of deadly attacks against civilians and for their links to brutal regimes, MEK members could perhaps expect to be interned in Guantanamo Bay without due process; instead they are unabashedly lobbying for their cause in Washington and using large sums of money to exert influence over U.S. politicians. That these politicians are engaged in providing support for an FTO (Foreign Terrorist Organization), an activity for which countless individuals have been interned, tortured and killed, further illustrates that "supporting terrorism" in today’s parlance simply refers to providing support to an organization which commits violence of which the U.S. does not approve. MEK’s actions undoubtedly fit the objective definition of terrorism and they have been recognized for decades as being terrorists, but since their violence is convenient for U.S. foreign policy hawks at present they avoid that dangerous label and are instead able to freely propagate their agenda in the United States without fear of retribution.

The fact that U.S. officials are openly consorting with, and receiving funding from, a group with American blood on its hands in order to promote that group’s interests is something which may escape the notice of its citizenry, but it is keenly watched by Iranians and others who are looking to the gauge the level of integrity and consistency in U.S. policy. The selective application of the label of “terrorist” based on who the U.S. is choosing to fight at any given point is further evidence of the bankruptcy of this term. "Terrorists" are those who are interred in CIA black sites, subject to legally sanctioned torture and killed without public outcry; but as the case of the MEK shows the very definition of who is a terrorist is based not upon what acts individuals or groups commit, but upon how favorably or unfavorably those acts are viewed in Washington. The level to which the term is demonstrably hollow and meaningless can be glimpsed here in the fact that U.S. officials themselves feel little reticence about openly engaging in an act which they condemn others for; providing material support to terrorist groups.