Mistakes of the 2008 Democratic primary

I thought blaming the Clintons for the GOP jihad against them was unfair. Is the left doing the same to Obama? 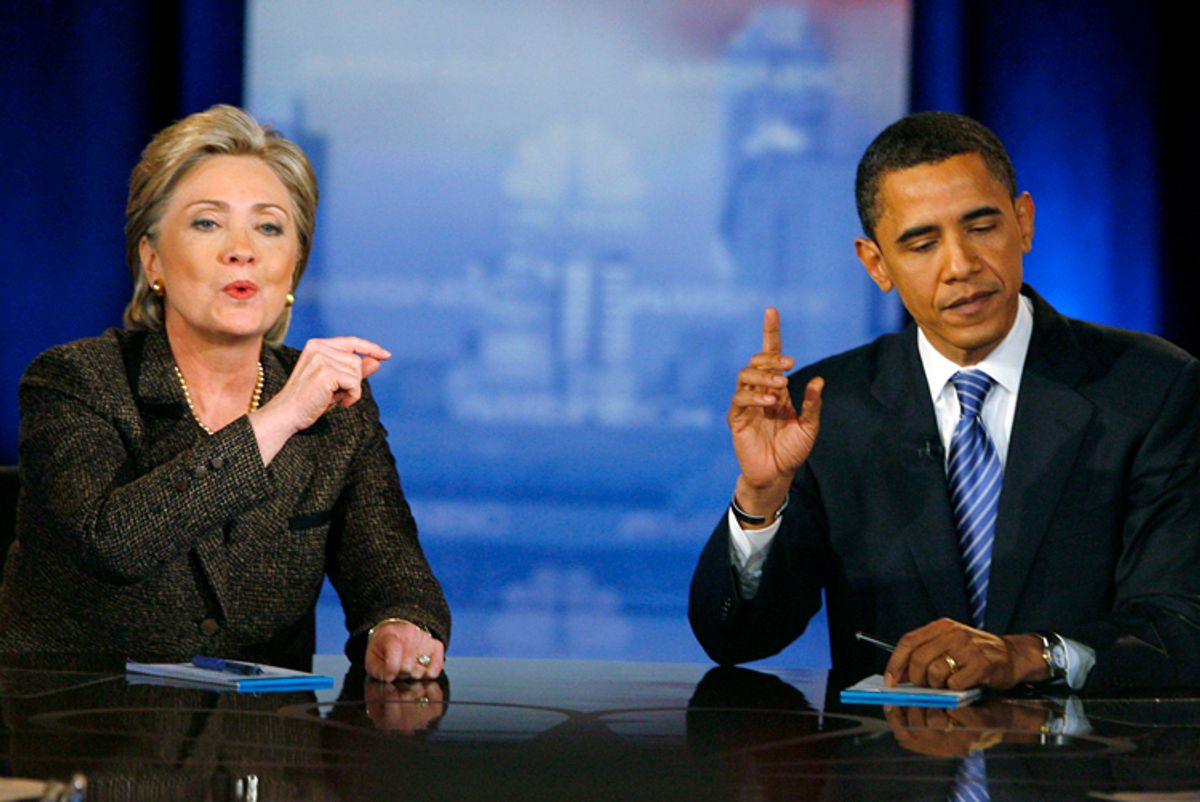 Every time I try to get out of this discussion about whether liberals made the wrong choice in the 2008 Democratic primary, someone pulls me back in. The Nation's Ari Melber, a writer I like a lot, asked me my thoughts via Twitter Monday night. Even more intriguing, a Salon reader who criticized me regularly but always respectfully for my Obama skepticism in 2008 posted on Facebook that I had been right back then. OK, I live for being told I was right -- but I have no way to know whether Hillary Clinton would have been a tougher Democratic president than Barack Obama.

I've already written about why I think liberals pondering "buyers' remorse" over Obama is useless and divisive. My discussion with Melber and my Facebook friend made me realize something else. One of my primary complaints about Obama supporters in 2008 was the way so many blamed the Clintons for the GOP crusade against them, as though Republicans would have played fair if only the unethical Clintons hadn't given them Whitewater, Travelgate and most notably, sex scandals. That was unfair to the Clintons, and it was also naive. It hugely underestimated the ferocity of modern-day GOP attack politics. Now I find myself wondering if progressives are over-focused on Obama's perceived shortcomings when it comes to dealing with Republicans, because we likewise don't want to deal with the amoral political savagery of the enemy he faces.

I know: Amoral political savagery is pretty strong. I think it's fair. Just Tuesday Rush Limbaugh, the head of the Republican Party, said the London rioters are "the equivalent of Obama voters in this country."  Way to go, Rush! That's false, racist and unspeakably ugly all at the same time. One after another of the GOP presidential candidates has come out against the debt-ceiling deal -- and then they blame the president for the S&P downgrade their own intransigence triggered. Likewise, Republicans accused Bill Clinton of everything from murder to drug-running to betraying the American military, while one philanderer after another pushed for his impeachment over a sexual indiscretion.

I'm on record saying I thought Hillary Clinton might fight Republicans harder given her history in the White House. But I also think it's possible she might have tried to compromise with Republicans, at least to start her presidency. She certainly did so in the Senate, and her vote to authorize military force in Iraq showed a kind of triangulating accommodation that was reason to worry in the 2008 primaries. And who knows: Maybe she'd have been invested, in her own way, in proving President Clinton brought some of his problems on himself. She certainly knows how to keep her pantsuits on; maybe she could have shown that her husband would have accomplished more if he could have stayed in his pants. We'll just never know.

So it's important for Obama critics to remember that the lion's share of blame for our current political tragedy lies with the GOP. On the other hand, it's important for fervent Obama supporters to keep in mind that the GOP demonizes our current Democratic president much the way it did the last one. Racism gives the right wing more to work with, of course; on the other hand, they haven't called Obama a murderer yet. And if Obama critics over-personalize the president's problems, his defenders also over-personalize the criticism he gets. One divisive claim is that white progressives, in particular, are racially clueless for demanding that Obama fight harder and maybe even show anger, because he'd be attacked as a menacing angry black man if he did so.

First of all, we won't know that the president doesn't ever get angry, as he so richly deserves to. Second: I think the argument is condescending and kind of dangerous. Insisting a black president can never show anger might suggest a black man should never be president, because sometimes a president needs to get angry. It also harks back to the 2008 primary, when the normal give and take of politics was too often framed racially. If you noted that Obama was relatively inexperienced when it came to national politics, you might sound like you were calling him a boy. If you observed that he sometimes seemed above the fray, especially at a time of economic suffering, you could be accused of calling him uppity. If you suggested he could appear detached from voters, you were playing Sarah Palin's game of questioning whether he's "one of us." Trying to erect a racial force field around the president, in which the normal terms of political debate are judged out of bounds and racist, hasn't helped anyone.

I think many on the left anointed Obama the only progressive in the race out of a rescue fantasy. But it's possible people who want to see Obama face a primary -- and I do not, as I've said too many times to count -- have the same fantasy with a different, as yet unnamed savior. It gives progressives a sense of control: It's not that Republicans are better organized than we are, or that they'll fight Democrats by any means necessary; it's our fault that we somehow chose the wrong candidate. At least we might have it in our power to make better choices. But I think it's time to reckon with the fact that no matter whom we choose, Rush Limbaugh and his Republican Party will do whatever it takes to see them fail.