The Texas governor's surprisingly warm relationship with the Muslim community 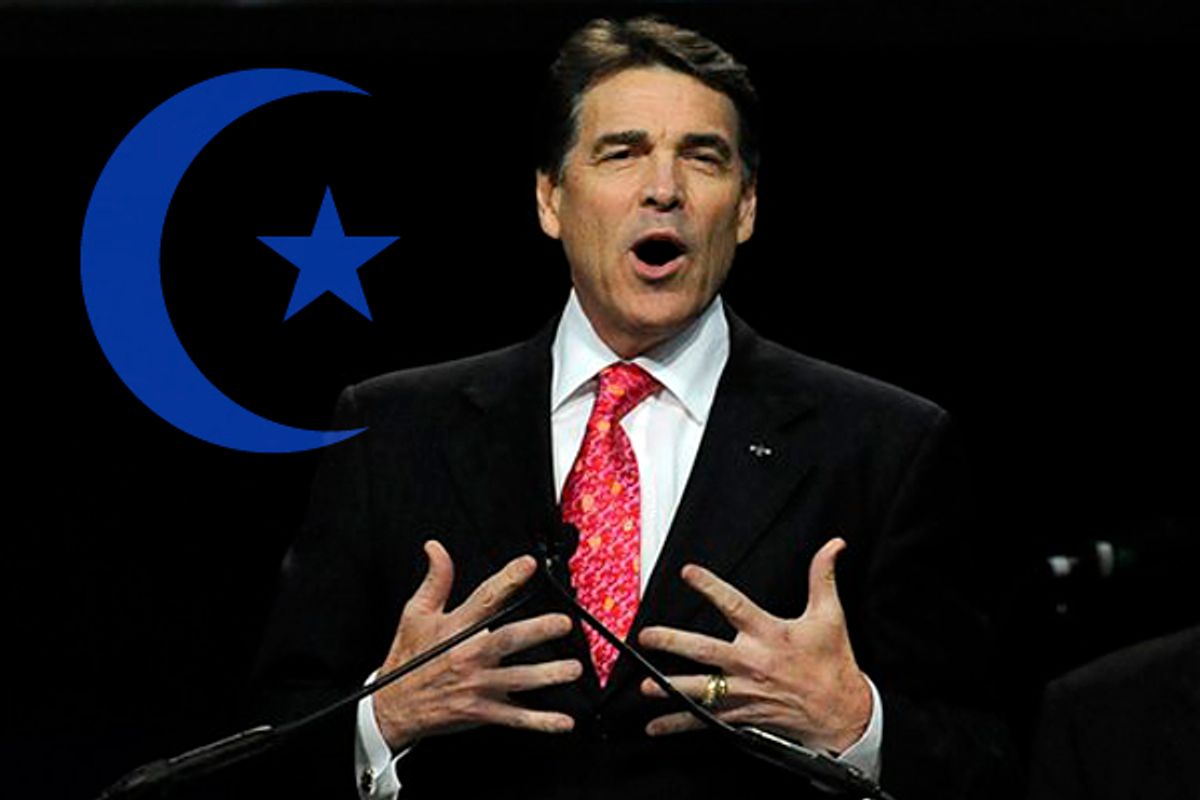 FILE - In this Saturday, Aug. 6, 2011 file photo, Texas Gov. Rick Perry speaks at a national prayer rally in Houston. A nationally televised debate, a test vote in Iowa and a candidacy by Perry Ã³ should he decide to seek the GOP nomination as many insiders, activists and party leaders expect Ã³ could shake up the Republican presidential race in the coming days. (AP Photo/Pat Sullivan, File) (Pat Sullivan)
--

Rick Perry has made a name for himself in the last few weeks by palling around with some radical evangelical Christian figures who are openly hostile to Islam, and have even, in one notable case, called for a ban on Muslim immigration to the U.S. Perry also raised eyebrows in his decidedly unecumenical exhortation for all Americans to pray to Jesus Christ.

But it turns out that the Texas governor has had surprisingly warm, constructive relations with at least one group of Muslims over the years.

Perry is a friend of the Aga Khan, the religious leader of the Ismailis, a sect of Shia Islam that claims a reported 15 to 20 million adherents worldwide. Sprouting from that friendship are at least two cooperation agreements between the state of Texas and Ismaili institutions, including a far-reaching program to educate Texas schoolchildren about Islam. That's a partnership that has already prompted a bit of grumbling in far-right corners of the blogosphere and could conceivably become a primary issue if, as expected, Perry enters the presidential race.

The Aga Khan, who claims a direct lineage to the Prophet Mohammed, controls a vast international network of business and philanthropic ventures; he is not a reclusive spiritual thinker, but rather a fabulously rich jet-setter. He has, for example, been married to two princesses. (His father was for a time married to the actress Rita Hayworth.) He reportedly owns 900 Thoroughbred race horses. And in 2010 Forbes put his net worth at $800 million. All of this has made the Aga Khan a fixture in the tabloids in the U.K., where he holds citizenship (sample headline: "Saga over Aga's skiing fall").

Perry met the Aga Khan during a 2000 family trip to Paris (the Aga Khan owns a large estate, Aiglemont, north of the city), the Austin American-Statesman reported in 2008. Two years later, Perry spoke warmly at a dinner in Houston hosted by the Aga Khan. Over the years the governor attended other Ismaili events in Texas, culminating in a pair of formal agreements.

One, in 2009, provides for cooperation between Texas and the Aga Khan's organizations in the "fields of education, health sciences, natural disaster preparedness and recovery, culture and the environment." Perry was quoted at the official Ismaili website as saying at the signing ceremony that "traditional Western education speaks little of the influence of Muslim scientists, scholars, throughout history, and for that matter the cultural treasures that stand today in testament to their wisdom."

That sort of rhetoric presents a stark contrast to some other members of the GOP presidential field, who have variously called for resistance to Islamic cultural conquest and outright restrictions on Muslims in public life.

Perry also brokered a 2008 partnership between the University of Texas and Aga Khan University in Pakistan to expand cooperation on programs including the Muslim Histories and Culture Project, which trains high school teachers on Muslim history and culture curricula. "I have supported this program from the very beginning, because we must bridge the gap of understanding between East and West if we ever hope to experience a future of peace and prosperity," Perry said at the signing ceremony.

A taste of what is offered by the program -- which has trained scores of teachers who have taught thousands of Texas students -- is here; it seems to be a sensible introduction to the Islamic world (and one session even quotes the likes of Edward Said!).

It's not beyond the realm of possibility that right-wing bomb-throwers will use this as a line of attack against Perry. In fact, the program has already been the source of political controversy in Texas. Back in 2008, Republican State Board of Education member David Bradley distributed fliers revealing that his Democratic opponent, a social studies educator, had traveled abroad as part of the program to study Islamic culture. "I think Islamic curriculum is about the furthest thing that we need to be introducing into Texas classrooms," he told Houston Chronicle columnist Lisa Falkenberg. "I think people are real sensitive about Islamic studies, given recent events in the United States."

Perry's relationship with the Aga Khan has already generated skepticism from commenters on a couple of far-right websites. "Scratch him off my Presidential list," wrote one. "We have already seen what a Muslim enabler in the White House can do."

In an email to Salon, Perry spokesman Catherine Frazier affirmed that Perry "has a good relationship with the Muslim community in Texas." Asked about his views on Shariah, she wrote: "Gov. Perry took an oath to uphold the U.S. and Texas constitutions, and the principles enumerated in those documents are what guide his leadership."

It's worth noting that other members of the GOP field previously had good relations with Muslims in the years before the current hysteria. A Shariah-compliant mortgage program was established during Tim Pawlenty's tenure as Minnesota governor, but he later canceled it. And as I've documented, Newt Gingrich has cultivated prominent Muslim donors and in the 1990s helped Muslim congressional staffers get space for prayers on Capitol Hill.

UPDATE 8/15/11: A copy of the memorandum of understanding between the University of Texas and Aga Khan is here.