"The Help": A tale of not-so-ancient American history 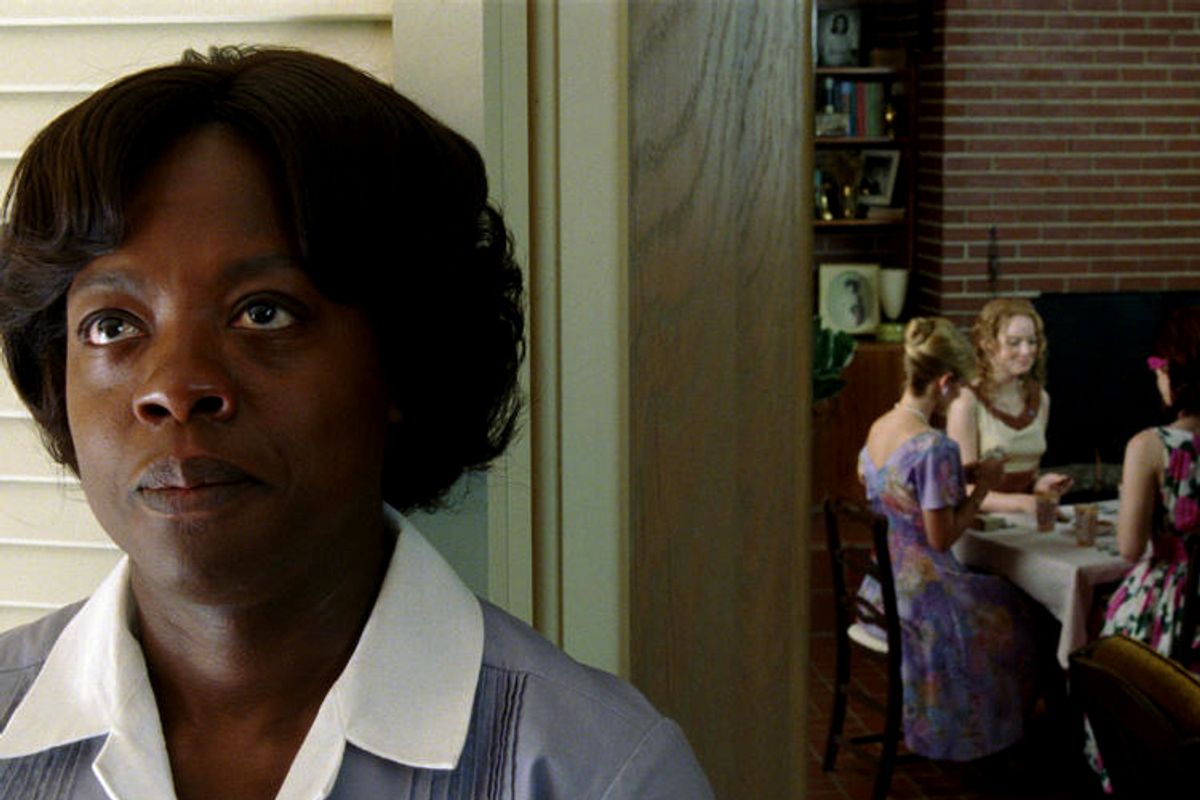 As a book and a movie and a social phenomenon, "The Help" functions as a kind of Rorschach test that measures how you feel about the history of racial inequality in America. Kathryn Stockett's best-selling novel is set in the profoundly segregated and hierarchical Deep South of the Jim Crow era, nearly half a century ago, and writer-director Tate Taylor's handsome and largely admirable film adaptation captures the time and place in ravishing detail. "The Help" definitely worked on me as a consummate tear-jerker with a terrific cast, and it's pretty much the summer's only decent Hollywood drama. You could also describe it as an accretion of familiar ingredients: "Mad Men" plus "Steel Magnolias" plus "To Kill a Mockingbird" plus "Mississippi Burning."

As I say, on the surface of things "The Help" is set in a distant galaxy, far, far away. It would be ludicrous to claim that things have not changed for black people in America. Somehow or other we apparently elected an African-American president -- please hold all the hate mail, just for a second! -- and even in Jackson, Miss., I doubt anyone makes the "colored maid" use an outdoor toilet these days. But you don't have to be some kind of raving leftist to see that "The Help" masquerades as an inspiring entertainment but also, along the way, invites us to look closely at contemporary attitudes and contemporary inequality, and not to feel too superior to the benighted past.

Stockett herself was not born until 1969, and drew on her own experiences being raised by African-American women who worked for her parents in the '70s and '80s. Her book is set in the dramatic context of the early '60s, when the civil rights movement was just beginning to capture national attention, but as she has said in interviews, relations between affluent white Mississippians and their black hired help really hadn't altered much between that time and her own childhood. And for all the cultural shifts America has experienced since then, the fundamental economic disparity between whites and people of color has hardly improved, if indeed it hasn't gotten worse. A recent study by the Pew Research Center suggested that the current recession -- and can we stop pretending it ever ended? -- has slashed the median net worth of black households by 53 percent (and Hispanic households by 66 percent), while white wealth fell by just 16 percent. The raw numbers are even more astonishing: The median household net worth for white Americans is $113,149, and for blacks it's $5,677. That's not a misprint or a misunderstanding; the median white household is 20 times richer than the median black household.

Yep, you're right -- here I am, trying to turn an uplifting fable with dazzling period costumes and the goofy but irresistible Emma Stone in ringlets into some kind of dreary, feel-bad documentary. I still think Stone's real gift lies in comedy, and I fear that her sudden ascendance to movie-star status risks overexposure. But her enormous eyes and heart-on-her-sleeve emotional register is well suited to Eugenia "Skeeter" Phelan, the aspiring Jackson journalist who fills the half-accidental Atticus Finch truth-teller role in "The Help." It's Skeeter who throws Jackson society into an uproar by convincing local black maids to tell her their stories, but for my money the great performance in "The Help" comes from Bryce Dallas Howard as Skeeter's nemesis Hilly Holbrook, an icy, bitchy and (as we eventually learn) profoundly insecure and unhappy socialite who's passionately devoted to upholding white supremacy and segregation. Howard's never really had the success, or gotten the recognition, that her talent merits, and now appears to be following her dad's footsteps into a career behind the camera. Here she turns a character who could have been a racist cartoon into an utterly loathsome but recognizably human creation (as well as a deadly accurate portrayal of a certain species of brilliant and ambitious Southern sorority girl, one often encountered today in the Republican Party). If Hilly had been born a few decades later, you can imagine her running a major corporation or a presidential campaign.

If Stone's Skeeter remains the central character and the principal audience pathway into the story, writer-director Taylor arguably improves on the book simply by avoiding Stockett's controversial attempts to write in the dense dialect of uneducated African-American women. (She herself has said that if she'd known millions of people would read "The Help," she might have adopted a different approach.) Instead, Taylor can call on a prodigious actress like Viola Davis to lend both a voice and a physical reality to Skeeter's main collaborator, the noble but exhausted Aibileen Clark, who trudges through life armed with her faded blue maid's uniform and a studied imperviousness to the ways of white folks. It's a limited role but one Davis handles with enormous dignity, nearly matched by Octavia Spencer as the feistier Minny Jackson, who takes revenge on Hilly Holbrook after her firing in such spectacular and satisfying fashion. (Readers of the book already know what I mean; others will have to wait.)

I have no idea how Taylor got this directing assignment, given that his only previous feature was a nearly unreleased low-budget comedy called "Pretty Ugly People." But the result is a richly satisfying theatrical entertainment, very much in the vein of a classic Hollywood "women's film" or a lesser Tennessee Williams play. Along with Stone and Davis and Howard and Spencer, he gives ample screen time to Jessica Chastain, who nearly steals the show as Celia Foote, a "white trash" wife rejected by Jackson's fembot aristocracy; Allison Janney, as Skeeter's mother, dying of cancer but determined to fix her up with a well-positioned fiancé; Ahna O'Reilly, as Hilly's toadying sidekick; Sissy Spacek, as a senile but genial matriarch; and the great Cicely Tyson, in a brief role as Skeeter's beloved childhood maid. It's a veritable smorgasbord of great female performances, and I don't care how analytical you are about "The Help" as a social signifier, you're still gonna laugh and think uncomfortable thoughts and cry like a little kid with a dead gerbil. Bring a pocketful of tissues. On second thought, these are hard times, no matter what color you are; buy the generic brand and bring the whole box.

Movies Our Picks Race The Help