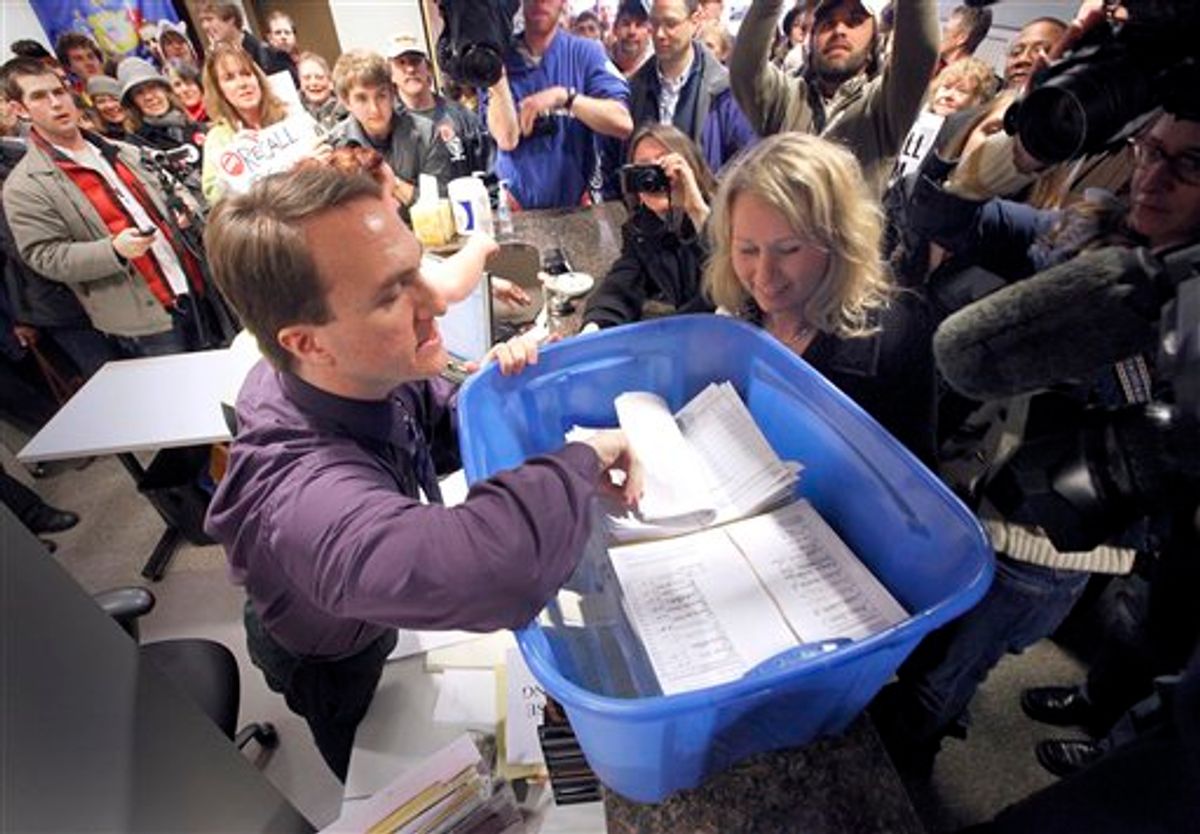 Republicans held onto control of the Wisconsin Senate on Tuesday, beating back four Democratic challengers in a recall election despite an intense political backlash against GOP support for Gov. Scott Walker's effort to curb public employees' union rights.

Fueled by millions of dollars from national labor groups, the attempt to remove GOP incumbents served as both a referendum on Walker's conservative revolution and could provide a new gauge of the public mood less than a year after Republicans made sweeping gains in this state and many others.

Two Democratic incumbents face recalls next week, but even if Democrats win those they will still be in the minority.

Turnout was strong in the morning and steady in the afternoon in communities such as Whitefish Bay, Menomonee Falls and Shorewood, where Sen. Alberta Darling was one of the four Republicans to hold onto her seat.

"I'm in a private union, so they haven't necessarily come after me," Spencer said. "But everybody should have the right to be in a union. I came out to stop all the union-bashing stuff."

John Gill, 45, of Menomonee Falls, voted for Darling and questioned the opposition's anti-GOP rhetoric, which went far beyond collective bargaining.

"This was all supposed to be about the workers' rights, so to speak. But that has not been brought up one time. It's all been misleading, the attack ads, things like that," Gill said. "The one reason they started this recall, they didn't bring up once."

Until this year, there had been only 20 attempts since 1913 to recall any of the nation's state lawmakers from office. Just 13 of the efforts were successful.

Also winning on Tuesday was Democratic state Rep. Jennifer Shilling of La Crosse, defeating incumbent Republican Sen. Dan Kapanke, who had been in the Senate since 2004. The other Republican ousted was first-term incumbent Sen. Randy Hopper of Fond du Lac, defeated by Democrat Jessica King, the former deputy mayor of Oshkosh.

Republican Sens. Sheila Harsdorf of River Falls, Rob Cowles of Allouez and Luther Olsen of Ripon all held onto their seats.

The stakes in Wisconsin were clearly much larger than control of the Senate. Democrats cast the recall results, in which they picked up two seats, as a rebuff of the Republican revolution started by Walker but it clearly wasn't all that they wanted. Both parties also were testing messages ahead of the 2012 presidential race, in which Wisconsin was expected to be an important swing state.

Republican and Democratic strategists were leery of reading too much into the results heading into next year's campaign.

The recall effort helped stir passions in the Democratic base "in ways we might never have been able to achieve on our own," said Roy Temple, a Democratic political consultant with extensive experience in the Midwest. But, he said, that doesn't mean the recall can offer much more than hints about broader trends.

"Wisconsin was a swing state before, and it will be after," Temple said. "Maybe (the recall) is a sign of strong intensity, and that's not meaningless, but it's not predictive."

Republican National Committee Chairman Reince Priebus said the party was "all in" to win the races. A coalition of national unions spent millions on attack ads and other campaign activity to wrest seats from the Republicans. Conservative groups also spent millions.

It all amounted to a summer unlike any other in Wisconsin. More than $31 million was estimated to have been spent on the nine recall efforts, rivaling the $37 million spent on last year's governor's race.

"I feel that a lot of people didn't get their way, threw a crybaby fit and decided to have a recall. The majority of Wisconsin already voted," said 43-year-old Ross Birkigt of Menomonee Falls. "It's a shame that all of sudden this happens and that a lot of special-interest money gets poured into it. I'm kind getting sick of seeing this stuff on TV every single minute.

Republicans won control of both houses of the Legislature and the governor's office in the 2010 election just nine months ago.

The Legislature that had been approving Republican-backed bills in rapid succession would likely have ground to a halt if Democrats had won back the Senate. They would then have been able to block anything from passage without a bipartisan agreement.

Any newly elected senator will take office within 15 days, a brief window in which Republican Senate leaders could call a lame-duck session if they are about to lose control.

The races next Tuesday target Sens. Bob Wirch of Pleasant Prairie and Jim Holperin of Conover.