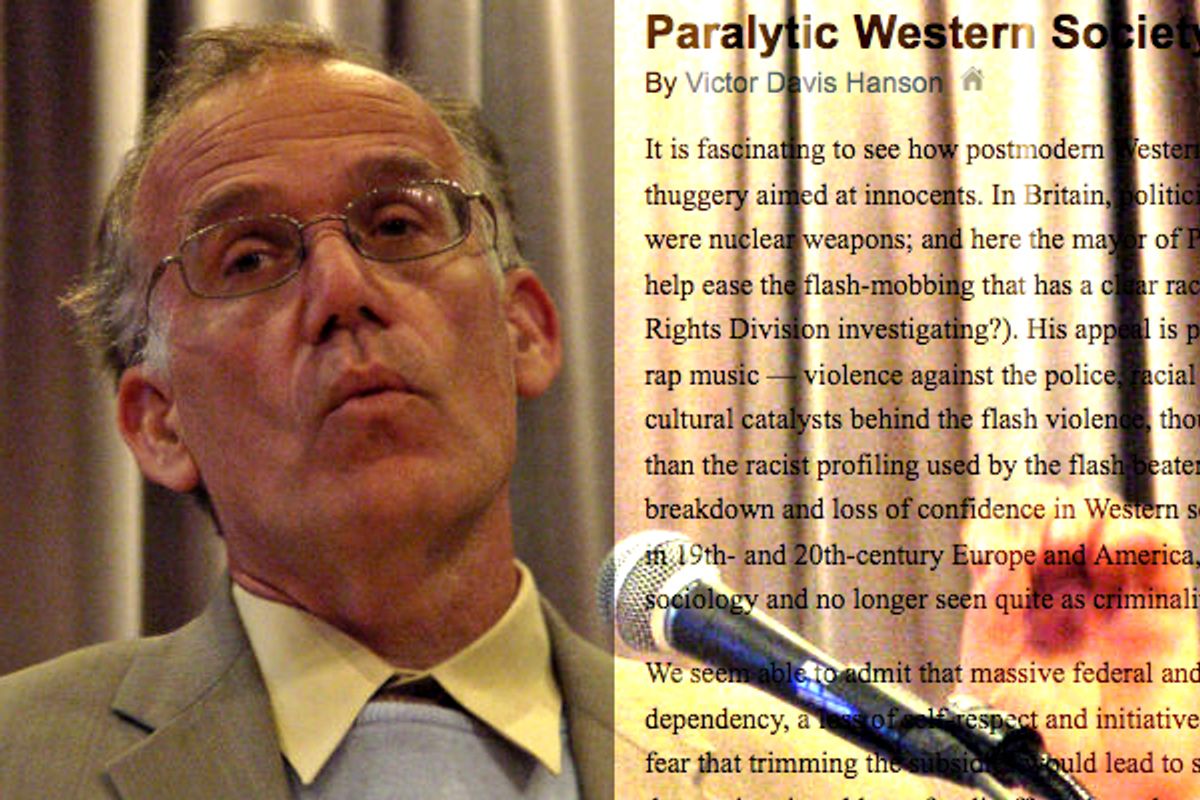 As a recovering movement conservative, I have (or would at least like to think I have) a sharp eye for its flaws -- for detecting those instances in which it is simply unable to deal with the truth and thus resorts to prevarication, misdirection, or simple dishonesty.

Victor Davis Hanson is one of the highest profile and most widely-read conservative commentators -- his basic shtick is to compare America’s imperial adventure du jour to those of the Greeks or the Romans. There then follows a bunch of very confused historical comparisons that invariably come to the conclusion that the answer to the present difficulty is more military force, more invasions, more bombing, and more "American leadership." Hanson has, as of late, also made a name for himself with hackneyed attacks on Obama’s Keynesianism and the generally left-wing, socialist, and nasty way in which the president manages the economy.

But I’m not going to attempt to refute Hanson’s entire opus; many other more capable and entertaining writers have already done that. No, what I want to do is to point out a single instance of almost unbelievable factual sloppiness which marred one of his recent posts at National Review. Finally reacting to the riots in Britain, after writing 3 separate blog posts and an article, Hanson wrote:

It is fascinating to see how postmodern Western societies react to wide-scale rioting, looting, and thuggery aimed at innocents. In Britain, politicians contemplate the use of water cannons as if they were nuclear weapons; and here the mayor of Philadelphia calls on rappers to appeal to youth to help ease the flash-mobbing that has a clear racial component to it (is the attorney general’s Civil Rights Division investigating?). His appeal is perhaps understandable, but many of the themes of rap music — violence against the police, racial chauvinism, and nihilism—may well be some of the cultural catalysts behind the flash violence, though to suggest as much would be seen as more racist than the racist profiling used by the flash beaters. All these incidents are symptomatic of a general breakdown and loss of confidence in Western society. Such urban violence was of course a constant in 19th- and 20th-century Europe and America, but now it is deeply embedded within modern sociology and no longer seen quite as criminality.

Now it just so happens that I hail from Philadelphia and that I have actual read a number of articles on the shameful and appalling episodes of "flash mob" violence. If one read Hanson’s post and knew nothing else about what has recently transpired, one would inevitably come away with the conclusion that the city’s mayor was a weak-willed coward, a milquetoast so bereft of leadership that his only answer to the problem of rampaging youths was to appeal to rappers. In other words, you would think that Michael Nutter was a prime example of the rottenness and corruption of contemporary liberalism, and perfectly emblematic of its failure and of the broader “loss of confidence in Western society.”

How surprising, then, to learn that Philadelphia’s mayor recently gave a shockingly strong-worded and blunt speech at a traditionally African-American Baptist church in which he said, among other things:

"If you want to act like an idiot, move. Move out of this city. We don't want you here anymore."

“Parents, get your act together. You need to get hold of your kids before we have to."

"A particular problem in the black community is we have too many men making too many babies that they don't want to take care of," he preached to applause. "We end up dealing with your children.

"They're lawless. They act with ignorance. They don't care about anybody else, and their behavior is outrageous. Well, we're not going to tolerate that."

Nutter’s speech also criticized black fathers for being nothing more than "sperm donors and ATMs" and was, considering the context, about as hard-hitting and brash as possible (he was in a church after all, so one wouldn’t exactly expect him to go on an expletive-filled tirade). At a news conference on Monday, as if to explicitly negate the “root cause” thesis that Hanson so clearly despises, Nutter even went on the record as saying "I don't care what your economic status is in life, you do not have a right to beat someone's ass on the street." Indeed Nutter’s speech was so-over-the-top that he actually drew criticism from a columnist for the Philadelphia Inquirer.

Now I’m not arguing that Nutter is right, nor am I defending (or attacking) his approach. I don’t want to get into the argument over what an appropriate response to youth violence is. What I am simply pointing out is that it is 100% factually inaccurate, absolutely and completely wrong, to argue that Michael Nutter is some lily-livered liberal who blames everything on "root causes" and who doesn’t see the flash mob violence as criminality. Indeed it’s very hard to see how Nutter’s speech, in which he spoke positively of the role of religion in his own personal development, demanded that people take responsibility for their own actions, and encouraged fathers to play a positive role in the lives of their children, differs in any way from what a Republican would say in the same situation.

I mean, honestly, if you sat down a bunch of conservative writers, or the Republican version of Aaron Sorkin, and said, "Write a speech about personal responsibility that you would love to hear delivered by the African American mayor of a major east coast city," would it differ in any substantive way from the speech that Nutter actually gave?

It turns out that if you only read Hanson’s post you would know less than you knew before reading it. You would come away thinking that the mayor of Philadelphia was a quisling and an idiot. In this way Hanson’s commentary, like that of many of his comrades, is negative value added -- you understand less about the world, and have a poorer understanding of objective facts, after you read it than you did before doing so.

In the grand scheme of things, this is a relatively minor error. Hanson has, of course, been just as wrong about much more important issues dozens of time over the past decade. But this little episode is highly suggestive -- Hanson is so sloppy and hackneyed in his writing, so ready to unquestioningly parrot cheap caricatures, that he cannot even recognize when someone is taking his side in an argument. Judging by the basis of what he has said and done, Michael Nutter is just about the worst possible example of the "paralysis" of Western society. That Hanson is incapable of recognizing this says everything you need to know about the extent to which he cares about truth or about informing his readers.

UPDATE: Victor Davis Hanson has responded to my article. As if to prove my point about the sloppy and careless way in which he goes about his writing he says:

Note: I was reacting to a CBS news item of August 9th titled “Mayor Nutter Calls On Hip-Hop Artists To Help Battle Flash Mobs.” Of course, I did not write that the mayor was weak-willed, a coward, a milquetoast, etc., but simply thought that his initial appeal as reported on August 9th was “perhaps understandable,” but misplaced. The hyperbole and unhinged adjectives are not mine, but belong to the hysterical Adomanis himself.

I am glad that it was also reported elsewhere (and apparently mostly later) that the mayor in fact had also seemingly dropped his emphasis on rap music, and had also given a courageous speech reminding black youth of their own responsibilities. But that was not the initial news story I was referring to; indeed, one could write a number of posts on all the news items about the flash mobs that were being disseminated at various times. And of course, I retract nothing: it really is most unwise to enlist hip hop and rappers, given that many of the themes of that genre — anti-police bigotry, racial prejudice, misogyny, and violence — are more part of the problem than the solution.

The news articles to which I linked, the ones that outline the mayor’s remarkably tough rhetoric about personal responsibility and the need for the black citizens of Philadelphia to own their own actions, were published on August 8th. The piece Hanson responded to (that was supposedly the "initial news story”) was published on August 9th. I know that dear Victor is a professor of classics and not of math, but August 8th is before August 9th. The speech that Nutter gave about responsibility, the one that Hanson had clearly never heard of, occurred before Hanson wrote his post. It’s therefore glaringly obvious that Nutter’s speech was not some sort of pivot away from dealing with rappers but was part of a comprehensive strategy to address youth violence.

Furthermore, Hanson seems to think that his own laziness somehow excuses him. Since he only read that single news item, it’s just totally unfair to expect him to have read any other stories about Michael Nutter and his response to the flash mobs. I won’t pretend that I go to the Library of Congress before authoring a blog post but, for pride’s sake if nothing else, I try to always read at least 2-3 sources to confirm a story. I would certainly make sure I did some proper research before insinuating that the mayor of a major American city responded to mob violence solely by asking rappers for help.

Hanson evidently thinks that his (allegedly) superior intellect and the rightness of his cause allows him opine on matters without, you know, actually having any idea what he’s talking about.

I’ll further add that it’s beyond hilarious that someone who sub-titles a section "idiot beat" can whine in such a self-pitying manner about "ad hominum" attacks. This is absolutely standard practice for movement conservatives like Hanson, who, out of one side of their mouth, will mourn the "loss of civility" and out of the other side of their mouth will darkly compare their political rivals to barbarians.