"30 Minutes or Less": Jesse Eisenberg is the bomb!

"30 Minutes or Less" is a sloppy, slapdash heist comedy in the grand August tradition 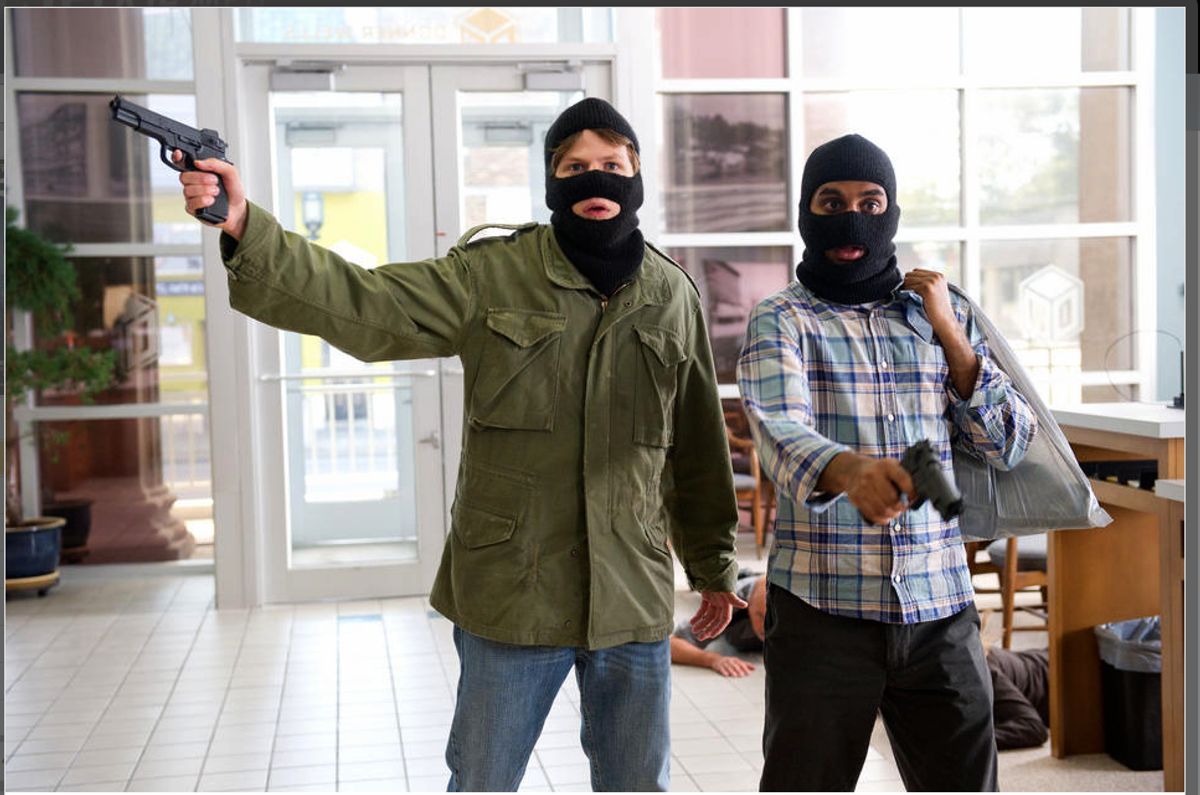 Jesse Eisenberg and Aziz Ansari in "30 Minutes or Less"
--

Around this time of year you often hear ritual laments from movie critics about the way Hollywood used to handle August, as a pet cemetery for schlocky drive-in flicks, third-rate slasher sequels, misbegotten and unfunny comedies, half-baked star projects that fell apart midway through and other unwanted industry debris. Well, somebody must have fired up the Way Back Machine in this double-dip poisoned soft-serve cone of a summer, because this week brings us not just "Final Destination 5" -- I totally missed the fact that there was ever a No. 4 -- but the addled and abbreviated heist comedy "30 Minutes or Less," a movie so full of Augusty goodness that you'll leave the theater with sunburned calves and the barfy, backwash taste of cotton candy mixed with Mr. Pibb halfway down your throat.

"30 Minutes or Less" features about half of a decent idea, which works out OK since it ends up as half a movie. Essentially, it's a zany sketch-comedy bit involving Jesse Eisenberg as a pot-smoking pizza-delivery dude who becomes a human bomb and "Eastbound and Down" star Danny McBride as an arrogant, obnoxious small-time buffoon cum genius. That gets stretched, just barely, to 80 minutes with the addition of some goofball sidekicks and irrelevant supporting characters. They didn't have any hilarious outtakes to show you over the closing credits because the entire movie seems to consist of its own outtakes. You get the feeling that director Ruben Fleischer ("Zombieland") and screenwriter Michael Diliberti eventually realized that the story made no sense and the characters didn't behave consistently from one scene to the next, and simply gave up. Editors were invited to stitch the funnier bits into something that vaguely resembled a feature film, and boom -- it's the perfect side dish for a 7-Eleven burrito and a Coke Slurpee.

Eisenberg plays a Grand Rapids, Mich., pothead failure named Nick who, when asked about Facebook, responds: "I don't check that shit. I'm off the grid!" Ha freakin' ha! Because, see, in this other movie Eisenberg played this dude ... oh, never mind. Nick drives his old beater Mustang for one of those pizza joints that promises you'll get your disgusting dinner within half an hour or it's free, which occasions a high-speed, high-octane opening scene that is easily Fleischer's finest hour. I will note, however, that the title and related concept have nothing to do with the actual plot of the film. August, dude! Nick has a Harold and Kumar-type misfit relationship with his oldest friend and roommate, Chet (Aziz Ansari), a schoolteacher who actually resembles an adult. They have a chick-related falling-out just before Nick is abducted by the low-rent criminal mastermind who calls himself King Dwayne (McBride), and strapped into a bomb devised by Dwayne's ambitiously coiffed underling, Travis (Nick Swardson, given little to do but often very funny).

Dwayne wants to turn Nick into a human bomb so that he'll rob a bank and get the money Dwayne needs to hire a Mexican hitman named Chango (Michael Peña) to murder his ex-Marine dad (Fred Ward), so that Dwayne can use the resulting not-very-large financial windfall to pay a stripper named Juicy (Bianca Kajlich) to "polish his scepter." And that's all the plot summary you're getting from me! I get that all of this is supposed to be scabrous, amoral, politically incorrect fun, in a comic, sub-Elmore Leonard vein, but it flies by so quickly that none of these characters and situations make much of an impression. I'll declare a minor exemption for Peña and Ward, who are both enjoyable in their hammy, stereotype roles. In the scene where they wind up shooting each other -- not much of a spoiler, I promise -- I was really sorry because it meant that the movie wasn't suddenly going to turn out to be about them, Buñuel-style, instead of all these other idiots.

Listen, there are some fine moments here, and by that I mean "OK if you're sufficiently baked." Go see this with August-based expectations and you'll be all right. Eisenberg never does anything different, in any role, but he makes a perfectly convincing loser here. Nick tells his would-be girlfriend, after she announces a move to Atlanta for a corporate job, "Well, I know a little bit about it from rap music, and it seems like a fucked-up place." And I appreciate having Ansari play a character who reads as straight-arrow suburban American, with no heavy commentary about tolerance or whatever attached. Now, the part of the movie where Nick and Chet decide to go through with the bank robbery despite no semblance of a feasible plan, the strong likelihood of death or incarceration and all kinds of more reasonable options such as telling the freakin' cops, that part is unbelievably lame.

As for Danny McBride, he's already crossed me off the Christmas-card list after I pronounced "Your Highness" (which he both wrote and starred in) to be the worst movie in the history of movies. First of all, OK, I was exaggerating. Secondly, I'll admit that I get the double-edged thing that McBride does here a lot better. He plays King Dwayne as the halfway smart small-town guy whose every idea is drawn from crap culture. He's got an autodidact's vocabulary, overrates his own intelligence and coolness and is right on the line between being somewhat admirable and being a sociopathic dick. When I saw Dwayne's Aerostar van, and how pissed he got about the Matchbox 20 song on Travis' mix tape, I was all like, Jeez, I know this guy. He lives in Placer County, Calif., and his name is -- never mind, I don't want him to drive across the country (or, more likely, break down in Missouri) just to beat my ass. So, yeah, Danny McBride, full props. He still bugs me, and I ran out of patience, even by August standards, way before the movie was over. Depending on the depth and deliciousness of your Slurpee, your results may vary.