Finding hope in the results from Wisconsin

The state Senate stays red after recall elections, but a historian says the battle might reenergize labor 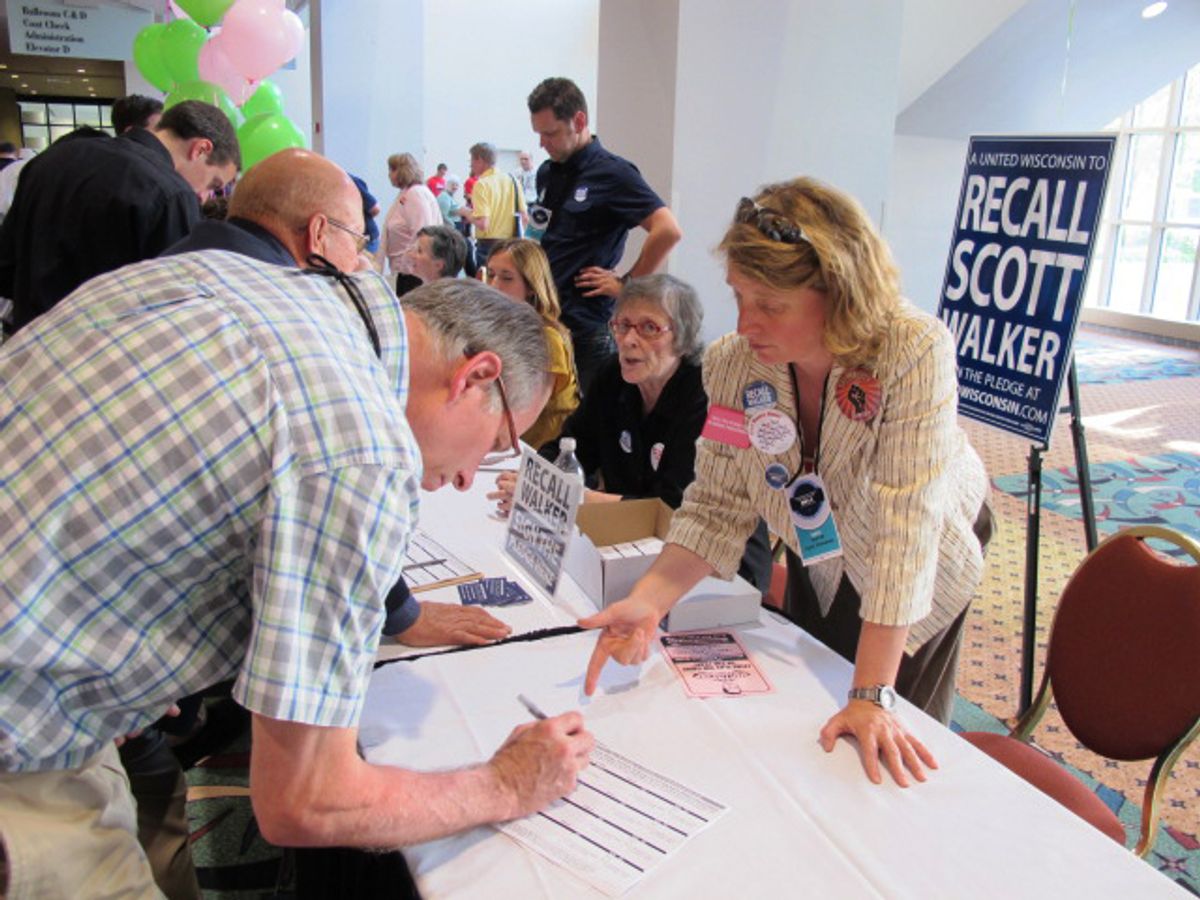 Ron Heitz, 59, of Waukesha, Wis., attends the state Democratic Partyâs annual convention in Milwaukee on Friday, June 3, 2011, where he signs a pledge to support an eventual recall of Wisconsin Gov. Scott Walker. Lynn Freeman, 43, of Madison, explains to him how the process will work. Democrats want to recall six Republican state senators this summer, and they hope to also recall Walker next year because of his efforts to strip most public employees of collective-bargaining rights. About 1,000 Democrats gathered in Milwaukee on Friday for a convention billed as a prelude to recalling Republican Gov. Scott Walker and six GOP state senators. (AP Photo/Dinesh Ramde) (Dinesh Ramde)
--

Wisconsin -- a fairly firm blue state in 2008 -- has quickly become a proving ground for some of the nation’s most reactionary conservative policies. Gov. Scott Walker, despite protests, has painted public-sector workers -- firemen, teachers, snowplow drivers, accountants and other middle-class citizens -- as some kind of dangerously elite segment of the population, and launched a direct attack on collective bargaining rights.

What the hell happened to Wisconsin, and the Dairy State's once-glorious progressive tradition?

Historian Andrew E. Kersten, a professor at the University of Wisconsin-Green Bay, is the author of the fascinating new eBook "The Battle for Wisconsin: Scott Walker and the Attack on the Progressive Tradition" (Hill and Wang/Farrar, Straus & Giroux). With Wisconsin back in the national headlines this week as voters went to the polls in six recall elections -- which ultimately kept control of the state Senate in Republican hands -- Kersten answered our questions about what Wisconsin’s shift might mean in other states.

Do Tuesday's recall elections for six Republican state senators, in which only two officials were actually ousted, indicate that Wisconsin remains fiercely divided, but with a definite right-wing tilt? What do you make of the recall outcomes?

I think you can read the last two state elections this way. In the last state Supreme Court election, the conservative (our court is ostensibly nonpartisan) won by a razor-thin margin. That election also showed an erosion of support for the conservative agenda. Tuesday’s recall elections were not statewide, but they do indicate that in some districts Republicans continue to be vulnerable, while in some areas there is a definite movement toward the center if not the left. Although clearly the Democrats came up a bit short with their overall goal of taking the state Senate back, these were tight races. The Republican electoral base is not as stable as it would appear. But the far-right-wing pull of the Republican Party is very strong. And, frankly, for the moment, that is where the money is in terms of corporate sponsorship.

I left rural Wisconsin in early 2009 to take a teaching job in Iowa. At the time, the state seemed to be amplifying its progressive credentials, if anything, pushing itself from the realm of swing state to true-blue state. One year later, Gov. Scott Walker leads an intense, reactionary right-wing movement in Wisconsin. You write that it felt like, on the morning after Election Day 2010, a "bloodless coup." What happened?

I agree that Wisconsin’s progressives were building momentum throughout the early 2000s. In part, the presidency of George W. Bush gave those on the left something to rally around. Furthermore, social movements for equality and progress have long had firm roots in Wisconsin and have been growing in strength over the last 20 years. Two years later, however, economic concerns were overwhelming. The change that President Barack Obama promised was not coming fast enough for many in the state. When Election Day came, a majority of voters rejected the political party in power. That said, although Scott Walker identified himself as a conservative, he never explained his plans to cut billions from education and cities, to eliminate environmental protections and to attack unions. I’m a pessimist; I worried that this might be the case. I have been sorry to see that the optimists were so wrong. I think Wisconsinites expected Walker to be like other Wisconsin Republican governors. They thought he would be a moderate. He is not. It seems to me that when people vote out of fear, bad things can happen.

The right wing has always been an enemy of labor unions. Still, it seems to me that political candidates have historically steered clear of outright attacks on public sector workers and public school systems, since so many constituents are part of or have interest in those worlds. But the Walker administration had no qualms going after these two entities with particular venom and aggressiveness. As a historian, why do you think he considered this a strategic move at this point in history?

During the gubernatorial campaign, candidate Walker made direct attacks upon state workers. Curiously, journalists, Democratic candidates and citizens seemed to ignore them. I was shocked to hear Walker’s analysis of the "have" and "have-not" problem in the state. He claimed that state workers were the haves, and the rest of the state were the have-nots. He promised to fix that as governor. His words flew in the face of studies that show not only are Wisconsin’s public servants underpaid but that they also work better and cheaper than private sector counterparts. Loyalty, a commitment to the public good, and healthcare and pension benefits keep state workers on the job. I think the lack of a consistent challenge to Walker on these grounds emboldened him to maintain the attack on state workers and state unions.

Once elected, he saw his moment -- Walker envisions himself as a Ronald Reagan-type politician -- to smash public unions once and for all. For Walker, attacking unions is a part of his Republican faith. But more practically, if he can defeat the state workers, then he can force new work rules and new state policies with less resistance. Further, defeating unions is yet another way to attack the politicians and political parties that unionists support.

Despite all their weaknesses and faults, unions are the bulwark of progressivism in Wisconsin and across the nation. You’re quite right. This could be a turning point. But, instead of it being the end of the labor movement, it might turn out to be the end of the beginning. Walker’s attack on kindergarten teachers, beat cops, firefighters and nurses could energize union forces. It did so dramatically among University of Wisconsin system faculty members.

Why does the intensity of the fight in Wisconsin matter to, say, somebody in New Jersey or Nevada?

The fight in Wisconsin is vitally important to every American citizen. If they can take a progressive state like Wisconsin and strip it of its vaunted public education system, smash its public union and roll back environmental protections, they can do it anywhere. As Sarah Palin has said, the line in the sand is here. If they take the beach in Wisconsin, other states -- and ultimately the federal government -- are next.

This is not progressivism’s last stand but it is one of those unprecedented, historic moments when the near future seems so very dependent on what average citizens say and do. People in New Jersey or Nevada may look around their own state and wonder what the future holds. At various times, the nation has turned to the Wisconsin example on problems such as worker compensation or environmental degradation and has found the way forward. The eyes are upon us once again.

If I were living outside the state, I would wonder: Can progressivism survive? Will public unions survive? Will Wisconsin remain a leader in public education? Can average citizens still influence the state through rallies and making their voices and not just their votes heard? How Wisconsinites answer these questions will impact how citizens in other states answer them. Ultimately, Wisconsin might become the pattern for the preservation of progressivism or its destruction.

The former director of the Wisconsin Humanities Council, Dean Bakopoulos is the author of "My American Unhappiness" -- a political tragi-comedy set in Wisconsin -- coming in paperback next month. He now teaches at Grinnell College in Iowa.