Austerity and the roots of Britain's turmoil 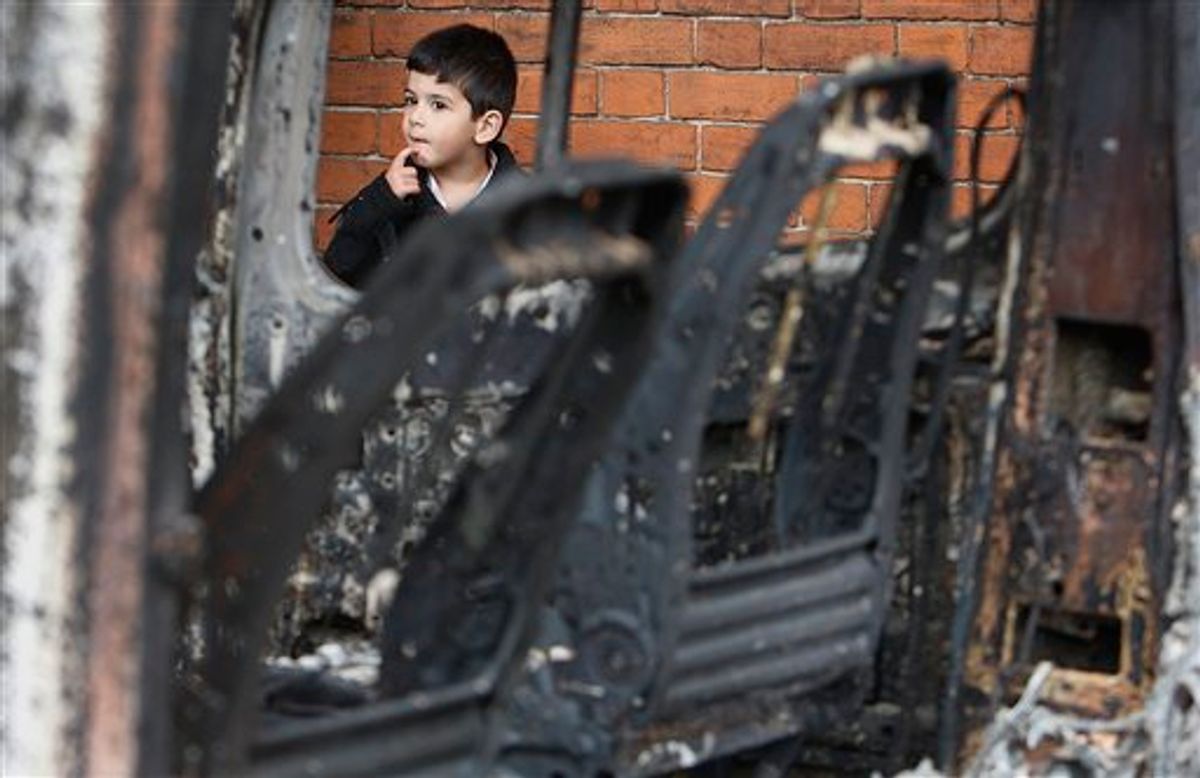 A unidentified boy reacts behind a burned car in Tottenham, north London, Sunday, Aug. 7, 2011 after a demonstration against the death of a local man turned violent and cars and shops were set ablaze. One police officer was hospitalized and seven others were injured during riots after a north London suburb exploded in anger Saturday night following a gathering to protest the Thursday shooting by police of the 29-year-old. (AP Photo/Akira Suemori) (AP)
--

"There’s going to be riots, there’ll be riots." Less than a week before a police shooting in the North London neighbourhood of Tottenham triggered the worst social unrest to hit Britain in decades, these were the words of a young man predicting the effect of youth club closures on his community. While the wanton violence and destruction still occurring in London and other places within Britain has shocked the world, it has not been as much of a surprise to many UK residents who have been warning of growing anger and alienation within British society, especially among youth.

While the rioters have come from backgrounds which cut across lines of race and social status, in the broadest sense what most of them have in common is that they are young men from economically deprived parts of the country. While many individuals have rightly pointed out that much of the violence appears borne of opportunistic criminality, this does not address the observable correlation between lack of economic opportunity, cuts to social services and the attraction of engaging in these types of destructive behaviours. Not only does Britain have one of the highest violent crime rates in the European Union, its unemployment rate for those between the ages of 16-24 currently stands at 18%. As Matthew Goodwin, a politics professor at the University of Nottingham, explained to Forbes:

"There's income inequality, extremely high levels of unemployment between 16 and 24-year-olds and huge parts of this population not in education or training…there's a general malaise amongst a particular generation."

The idea that we must not earnestly try to understand these actions is not only counterproductive but potentially suicidal in the long term. Far from being an isolated incident, these riots are but the largest and most recent incident of unrest to rock Britain in recent years. Most unrest has taken the form of protest, and has come in response to increasingly stringent government austerity measures and a perceived push to dismantle the social welfare state which has historically provided affordable healthcare and education to British society. In response to plans in 2010 to end government subsidies to UK universities, a move which would triple the cost of university education for the average student and largely destroy the meritocratic ideal of class mobility through education, tens of thousands of young Britons took to the streets in sometimes violent protests that in many ways appear to have been the harbinger of the riots we are witnessing today. Indeed, just a few months ago over 250,000 thousand people protested in London over further proposed cuts to social services, which nevertheless went ahead as planned.

The Cameron government’s five-year plan of austerity measures is in only its first year and has already resulted in massive cuts to public sector services such as affordable housing subsidies, job training and culture and sports programs. While this past week of rioting was triggered by a particular incident of violence, it can be observed to be part of a larger pattern of anger and frustration within British society. Government policies that have made circumstances increasingly difficult and often hopeless for those who live close to the margins of society are finally bearing results in the form of a huge number of disaffected, alienated youth without regard for the laws and norms of the country.

While the violence and destruction of property which have occurred this past week are intolerable and worthy of full-throated condemnation, anyone with an interest in maintaining social cohesion should pay heed to the demonstrable results of economic hardship coupled with cuts to social services. The United States has experienced incidents of domestic unrest, some of which have culminated in rioting, but nothing yet on a scale as widespread as what has been glimpsed in Britain in recent days. The current debt crisis and the resulting debate around cuts to government spending is a time to reflect on the serious, tangible, effects of cutting social services. While spending must be curbed, too often politicians make, for them, the easy decision of cutting support to those who are already the least enfranchised members of society. The past week’s decision to cut subsidized loans to graduate students from the budget is a prime example of a short sighted policy which will save money in the short term but will be deleterious to long term social stability. Cutting off avenues of class mobility for young people is an excellent way to engender the type of anger on display in Britain this week.

When considering the actual premise of "national security," one would have to look at a country which has descended into widespread internal chaos as being "insecure." For all the money spent on aggressive wars against ill-defined enemies in obscure parts of the world, the most dangerous threat to the actual physical safety of individuals within a country remains from their fellow citizens given a breakdown of social cohesion. It is a sign of dangerously confused priorities that defense spending is considered to be a budgetary holy grail which must be left untouched when discussing cuts to overall spending; but deep cuts to social services which directly affect the lives of millions of Americans are considered fair game. Nothing is more of a threat to the safety of Americans than a social system which will produce a generation of angry, disaffected young people and give rise to the types of scenes Britons are witnessing today. The same ingredients exist in the U.S. that do in Britain; indeed the unemployment rate for young Americans is even higher than the U.K, currently standing at 25 percent.As Phillip Jackson, the founder of the Million Father March, said this week:

"In Chicago and other major American cities, the violent acts are singular and isolated. The violence in London has become collective and focused, but the underlying causes are the same, and as soon as American kids figure that out, we're in trouble."

This debt crisis and the spending decisions it entails may constitute a potentially pivotal moment for the future of the United States. Following the lead of Britain and systematically dismantling the social welfare system may one day result in scenes of rioting and domestic insurrection playing out in major American cities as they are in British ones today. Cutting vital social services in order to protect the massive expenditures required to maintain the national security state and to continue funding countless directionless wars would be an extremely fateful failure of leadership as well as imagination.

Had there been a terrorist attack in Britain this past week as opposed to social unrest, there would undoubtedly be a huge chorus of voices in the U.S. loudly extolling the necessity of maintaining and even increasing defence spending, but there has been no commensurate call for protecting social spending in order to avoid the danger of Britain-style unrest. Those seriously concerned with national security should awaken themselves to the fact that there is absolutely nothing safe or secure about soaking your country in gasoline by ignoring, and exacerbating, the plight of its most disenfranchised citizens. Eventually an event will come along to strike a match; at which time the meaning and utility of “national security” will quite viscerally move from the abstract to the concrete.