The little things my father would never do again

After I left him in the hospital, I didn't think I could ever care about normal life again. Then, I saw I had to 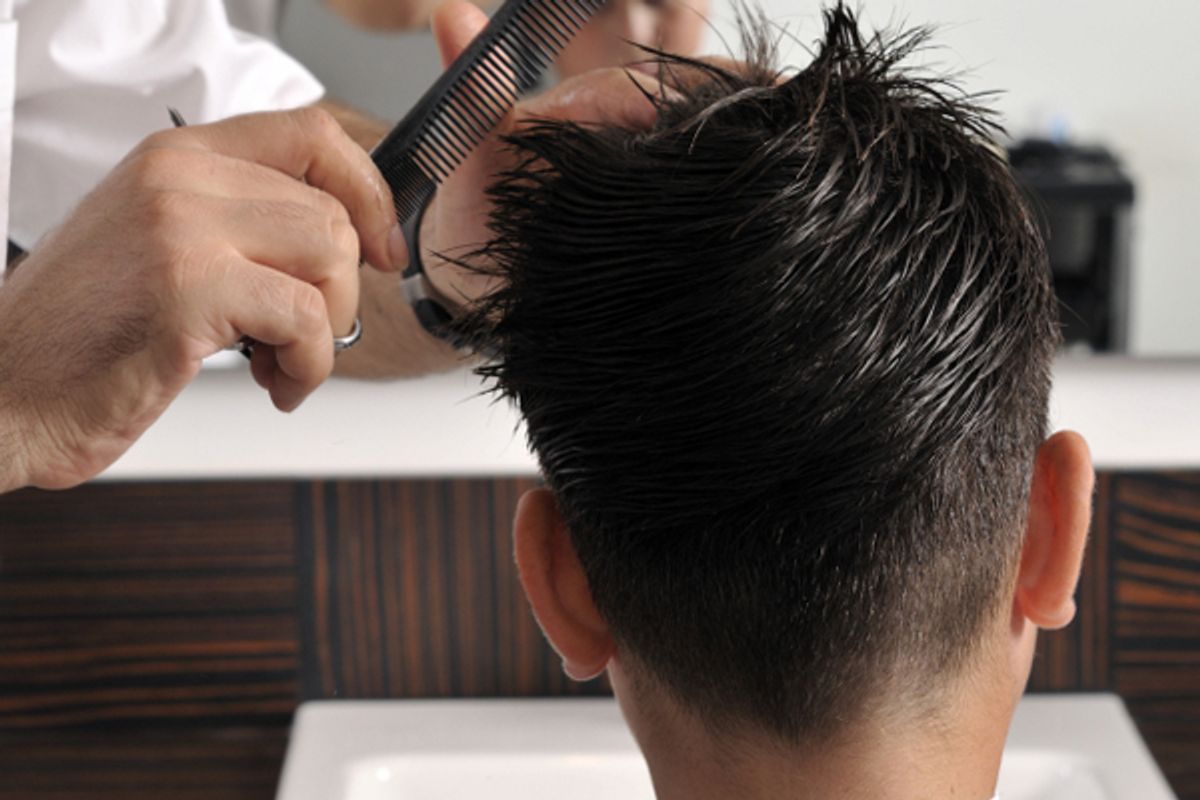 I entered the darkened shop, a wreck of a man with an unkempt beard, and the barber flipped a switch. Lights hummed, a singer began to croon from a crackling radio, and a steel fan creaked to life. What did I want? I had no idea. I had stopped caring months ago, and my face was a wall of curls.

The barber nodded. With a sigh, I took a seat, and he wet my head with a spray bottle. It made sense at this point to close my eyes. Then my head began to spin. I was hung over, and the foul funk of grief burned in my throat.

Three months earlier, the doctors in Florida said my dad was very sick. On the X-ray, you could see a ghostly starfish wrapped around his neck, tightening around pipes connecting head to heart.

I was still jumpy. The sound of scissors -- click, click, click -- took me back to the hospital. Opening my eyes, I watched as dark chunks of my hair fell to the ground. The barber paused to remove a straight razor from a paper sleeve, and I thought I smelled disinfectant. Into a bone handle went the blade, and I nearly retched.

Months earlier, hacking and hacking, the surgeons removed as much of my dad's tumor as possible, but it seemed too late -- the stuff had probably spread to bones and blood. He lay in the hospital bed, his neck a ruined gash, no longer able to eat or speak. As we prepared for rounds of desperate radiation, we kept round-the-clock vigil, hours in a room echoing with medical beeps and alarms. Pleading with nurses -- please administer the pain meds, but not too much, we want him to be able to walk, we need him alive enough to endure the radiation -- we also stalked the physical therapy twins, two stout men who, if they would only come again, would see he was awake enough to stand, that he was well enough to live. Meanwhile, his stomach bloated on liquid food, and we took turns swabbing a blazing forehead with damp cloth. Then the pain came, and I watched as his eyes rolled into the back of his head. He screamed without sound.

In the barber's chair, months later, my teeth chattered, and I thought about the blood and meat in a man's neck, and all that was required for that meat and blood to function. I looked up and saw the barber's knife hanging in the air, over my own neck.

At 6-foot-2, my dad had been a legendary bon vivant, his graying pompadour a guide to the good life. He visited us in New York and we partied till dawn. He read all the right books. He wore $600 shoes he found on sale for 30 bucks. So it was a shock to see him, years later, with arms limp, mute, delirious with pain, glasses crooked on his nose, gums atrophied from disuse. Dipping a towel into warm water, I rubbed shaving cream onto scratchy cheeks. It was a tense moment: He'd always been so particular about his toilet, and now, with all the blood thinners he'd taken, not only was I basically guaranteed not to shave up to his old standards, but he also might bleed to death. There was no room for error. In the hospital those tense days, there was never room for error. We tried so hard! Then, despite it all, a few weeks after the surgery, my fabulous dad was dead at 59.

The difficult part wasn't just that he was gone. Everyone, eventually, goes. Another part of the agony was that we, the living, having tried so hard in the hospital, were supposed to emerge from that white room and somehow care again about a normal life. I tried, but hours and days seemed to slip away.

The barber dragged a sharp knife over my skin. He pushed my nose to one side, jabbing at stray hairs with flicks of his wrist. He held an earlobe in two strong fingers and drew a perfect line of hair down my chin. The singer crackled on the radio, and there was a neat row of barber's brushes on the wall. Sun streamed in through an open door. My mustache was being expertly trimmed, and I couldn't remember when I'd last been close to such care. To my surprise -- could it be true? -- I found myself taking pleasure in this skill, this job done well.

Finished at last, the barber sat me up. I looked in the mirror. I was a son with a dead father, but also a young man with a new haircut. Laughing -- I'd never been so well groomed -- I realized I'd been made to look like Erik Estrada. Beaming at his handiwork, blow dryer roaring, the barber put away tools and rubbed lemon oil into my scalp. My hair had grown, now it was cut, and I bounded out into a new afternoon. What other choice did I have?

Nathan Deuel is an M.F.A. candidate at the University of Tampa. His last essay for Salon was about the death of his father, and he's also written for The Paris Review, Slate, The Awl, and Los Angeles Review of Books, among others. Previously, he was an editor at Rolling Stone and the Village Voice.