"Over Your Cities Grass Will Grow": Inside Anselm Kiefer's apocalyptic theme park 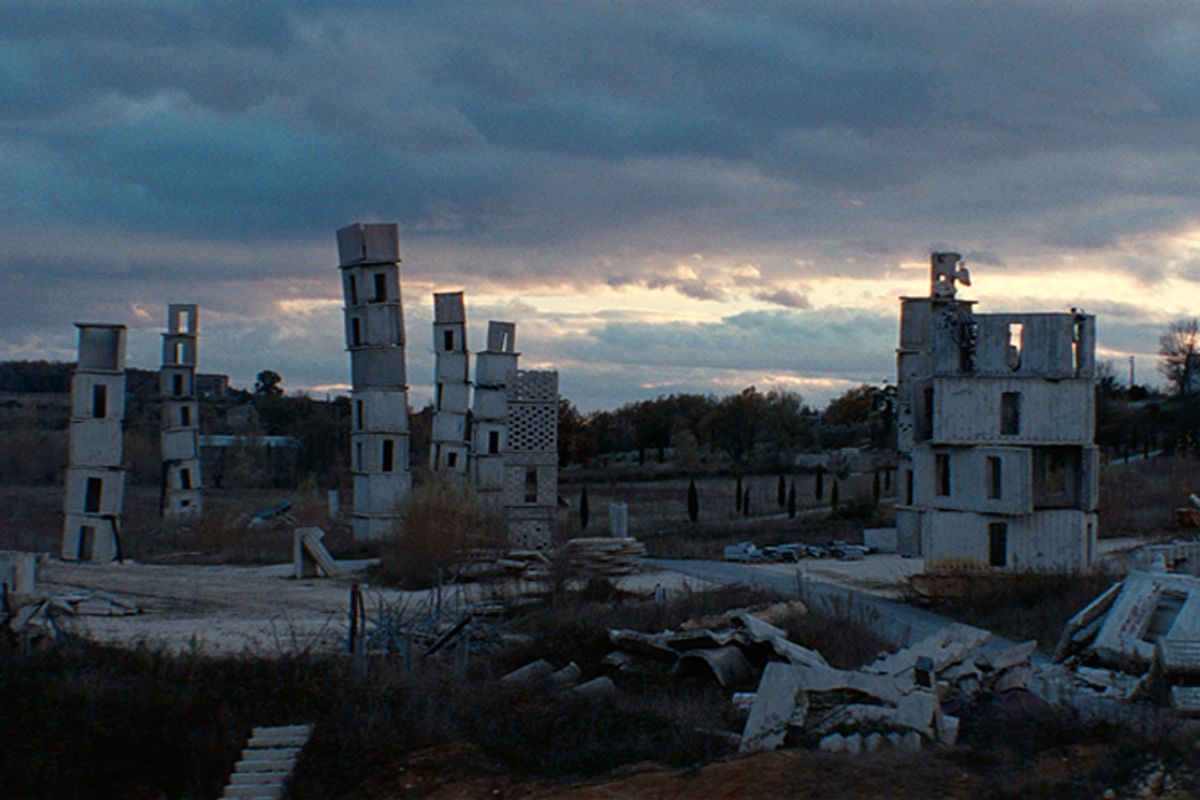 Here's a summer vacation unlike any other: Sophie Fiennes' highly unconventional documentary "Over Your Cities Grass Will Grow" takes you inside the symbolic and apocalyptic world of German artist Anselm Kiefer, who has spent almost 20 years building a dreamlike city to house his paintings in the south of France. It's difficult to use words to describe what Fiennes' camera captures as it travels slowly and deliberately through the buildings, tunnels, caverns and outdoor spaces Kiefer has constructed at La Ribaute, an abandoned silk factory near the town of Barjac. You could describe it as a permanent construction site, a ruin meant to evoke places like Pompeii, the set for a "Road Warrior" sequel or an almost fascistic museum and theme park built by Kiefer to honor himself.

Whatever else it may be, La Ribaute is clearly a mythic and aesthetic space that suggests various things in the outside world but never engages with them directly. On one hand, Kiefer's somber and often monumental work, with its ash and brown and gray and blue-black tones, has often been described as a reflection of his childhood in postwar Germany. He makes frequent references to the Holocaust, and to such related phenomena as the poetry of Paul Celan and the Jewish spiritual traditions of the Kabbalah. On the other hand, Kiefer's explanations of what's going on at La Ribaute have more in common with science fiction or ancient myths than with, say, replicating Berlin in 1945 (which was, not coincidentally, the year he was born). One building, he tells an interviewer, is supposed to have been hit by meteorites, represented by large boulders that have punched clear through the structure into the underlying tunnels. A basement has been filled with broken glass to represent "Sternfell," the mythical falling of stars to earth.

Fiennes, a member of a prominent family of English artists and performers (one of her brothers is the actor Ralph Fiennes), has created something difficult and distinctive in "Over Your Cities Grass Will Grow" -- a work of art that itself acts as a pathway into another artist's work. On reflection, I realize that films about artists are among my favorite recent documentaries, and I'm particularly thinking about Jennifer Baichwal's "Manufactured Landscapes" (about photographer Edward Burtynsky) and Thomas Riedelsheimer's "Rivers and Tides" (about sculptor and earth artist Andy Goldsworthy). "Over Your Cities" features no talking heads or file footage or standard interviews, and features no words and no human beings for the first 17 minutes. Cinematographer Remko Schnorr's camera crawls slowly through the baffling or threatening or beautiful objects of La Ribaute: great, gray books with blank fabric pages; a vast underground crypt supported by earthen pillars; mysterious sculptural tributes to the women of the French Revolution that resemble beds, wash basins, examination tables and graves, all at the same time.

Shot in widescreen CinemaScope, Fiennes' film is a mesmerizing spectacle that asserts its own pace, alternating between exploring the work itself and exploring how it is made, which often resembles a mid-level contracting job carried out by several French workmen. The only time Kiefer explains himself is in an extended interview sequence with a visiting German journalist, which Fiennes simply observes. Her structure, in fact, is oddly similar to that of Steve McQueen's "Hunger" -- a film by an artist, instead of a film about one -- in which passages of pure observation surround a single, static, highly discursive human interaction. I'm not offering "Over Your Cities Grass Will Grow" as my official Pick of the Week because it's so obviously a special-interest movie, and one that demands considerable attention and patience. But if you're willing to take this voyage with Fiennes into the psychic landscape and working life of one of the world's greatest contemporary artists, it's a trip you'll never forget.

"Over Your Cities Grass Will Grow" is now playing at Film Forum in New York. It will also play Aug. 16-18 at Webster University in St. Louis and Aug. 19-25 at the Zeitgeist Arts Center in New Orleans, with further screenings to be announced. Check website for more information.

Documentaries Movies Our Picks Over Your Cities Grass Will Grow