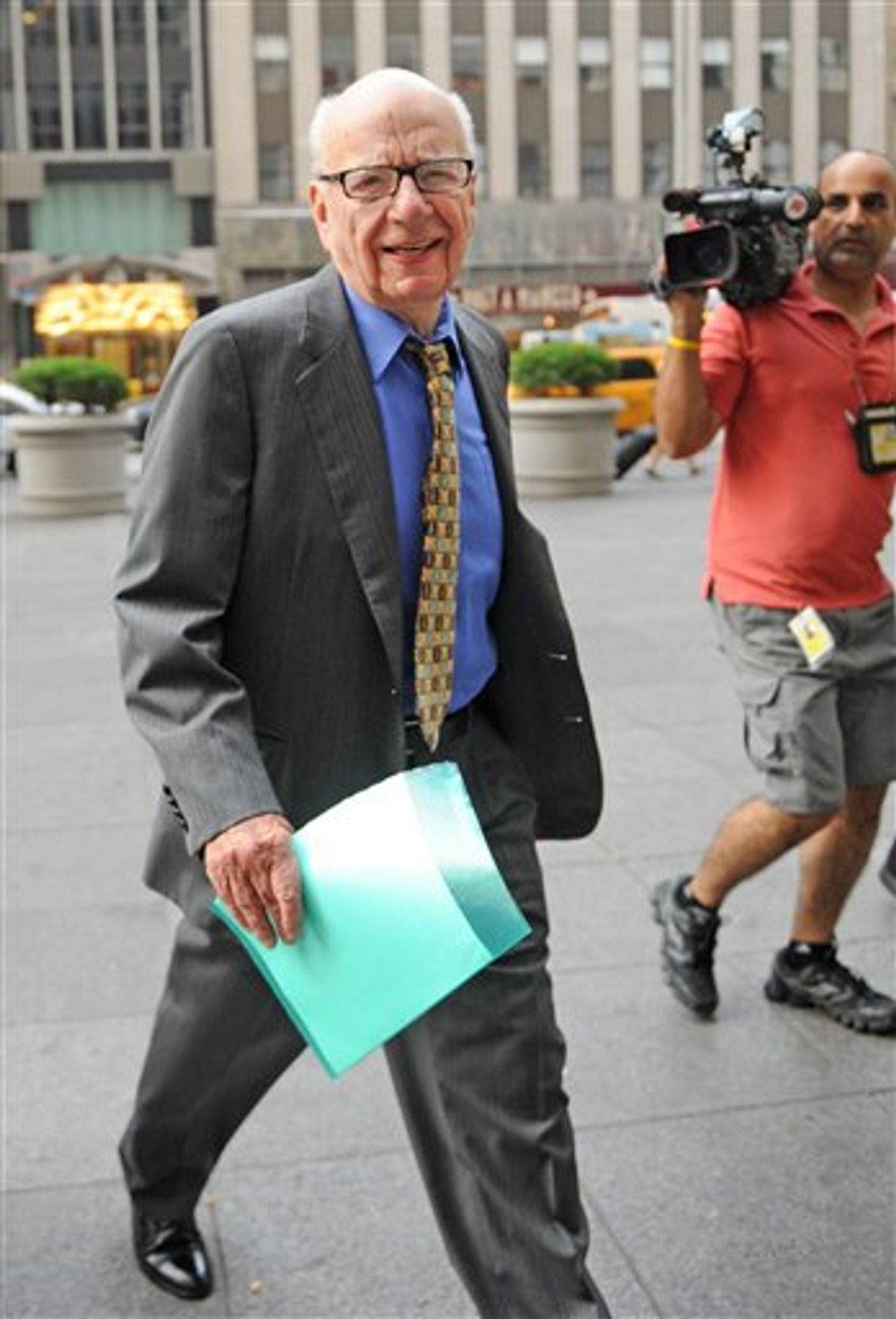 Rupert Murdoch vowed Wednesday to remain CEO of News Corp., the media conglomerate under fire for phone hacking in Britain.

Murdoch's stance came as the company reported that its net income fell in the last quarter by 22 percent, mainly because of the sale of money-losing social-networking site Myspace.

The phone hacking scandal and questions about Murdoch's control of News Corp. overshadowed the media giant's results, which beat expectations when excluding the Myspace sale.

Murdoch, 80, controls nearly 40 percent of News Corp.'s voting stock through a family trust. He said there would be no immediate changes to the board, rejecting assertions from journalists on a conference call about its lack of independence.

He also deflected questions about possible management changes at the top. He said he works together with Chief Operating Officer Chase Carey to run the company, and that there has been no change to a succession plan that foresees his son James Murdoch, 38, one day taking control.

"The board and I believe I should continue in my current role as chairman and CEO but make no mistake, Chase Carey and I run this company as a team," he said. He even joked when asked if the board would support James as CEO in the near future: "Well, I hope that the job won't be open in the near future."

"Chase is my partner. If anything happened to me, I'm sure he'd get it immediately, I mean if I went under a bus," he said. "Chase and I have full confidence in James. But you know, in the end, succession's a matter for the board."

James Murdoch's testimony before the U.K. Parliament last month has been challenged by two key former employees. He said he was not aware that phone hacking went beyond a single "rogue reporter" until a civil suit made him aware of a certain email in December 2010. The two employees dispute that claim.

Rupert Murdoch vowed to cooperate with authorities, as the company on Wednesday acknowledged for the first time that it is facing investigations into whether alleged phone hacking and police bribery occurred at its subsidiaries outside the U.K.

Earlier in the day, London police said they arrested a 12th person associated with the scandal-tainted News of the World tabloid.

The uproar over the hacking scandal reignited fears about the company's undue influence over politics in Britain and forced News Corp. to drop its $12 billion bid to take over the 61 percent of British Sky Broadcasting it didn't own.

It also shuttered News of the World, but said Wednesday the closure had no material impact on earnings.

The events at what Murdoch called "one small corner" of the company have rattled a media empire that spans profitable pay TV channels including Fox News and FX, and less profitable divisions such as 20th Century Fox Movie studio and The Wall Street Journal.

Since the phone hacking scandal erupted in early July, News Corp.'s shares have fallen 24 percent and the company has lost more than $11 billion in market value.

On Wednesday, after the quarter's earnings were released, News Corp.'s nonvoting Class A shares rose 12 cents to $13.83 in after-hours trading. They dropped 84 cents, or 5.8 percent, to close at $13.71 in the regular session.

Excluding the $254 million loss on the Myspace sale in late June, adjusted earnings came to 36 cents per share, beating the 30 cents expected by analysts polled by FactSet.

Advertising revenue at the domestic pay TV channels including Fox News grew 23 percent in the fourth quarter and 17 percent for the fiscal year from a year ago. Internationally, pay TV ad revenue was up 20 percent on the quarter and 22 percent for the year. That contributed to pay TV segment revenues rising 15 percent to $2.15 billion.

The operating income from every segment either grew or losses were cut.

The company said it expects adjusted operating income to grow in the low- to mid-teen percentages in the current fiscal year through June 2012 from $4.98 billion it posted in fiscal 2011.

In an appeasement to disgruntled shareholders, Carey told analysts the company would expand its recently announced plan to spend $5 billion buying back shares over the next 12 months if the company continues to see its stock as undervalued, "and today it is woefully undervalued."

He also said News Corp. would take a new stance toward acquisitions, saying they would need to generate a return on capital in the mid-teen percentages and be valued in the "tens or hundreds of millions" of dollars, not billions.

That position seeks to address investor concerns that Murdoch is an empire-builder who has squandered company cash on poor investments.

His most heavily criticized deals recently have been the purchase of Myspace for $580 million in 2005 but which it sold for $35 million this year, and the $5.6 billion paid in 2007 for Dow Jones & Co., owner of The Wall Street Journal, for which the company took a $2.8 billion write-down in 2009.