Authorities begin work prosecuting violent protesters, looters and vandals in the aftermath of the week's tumult 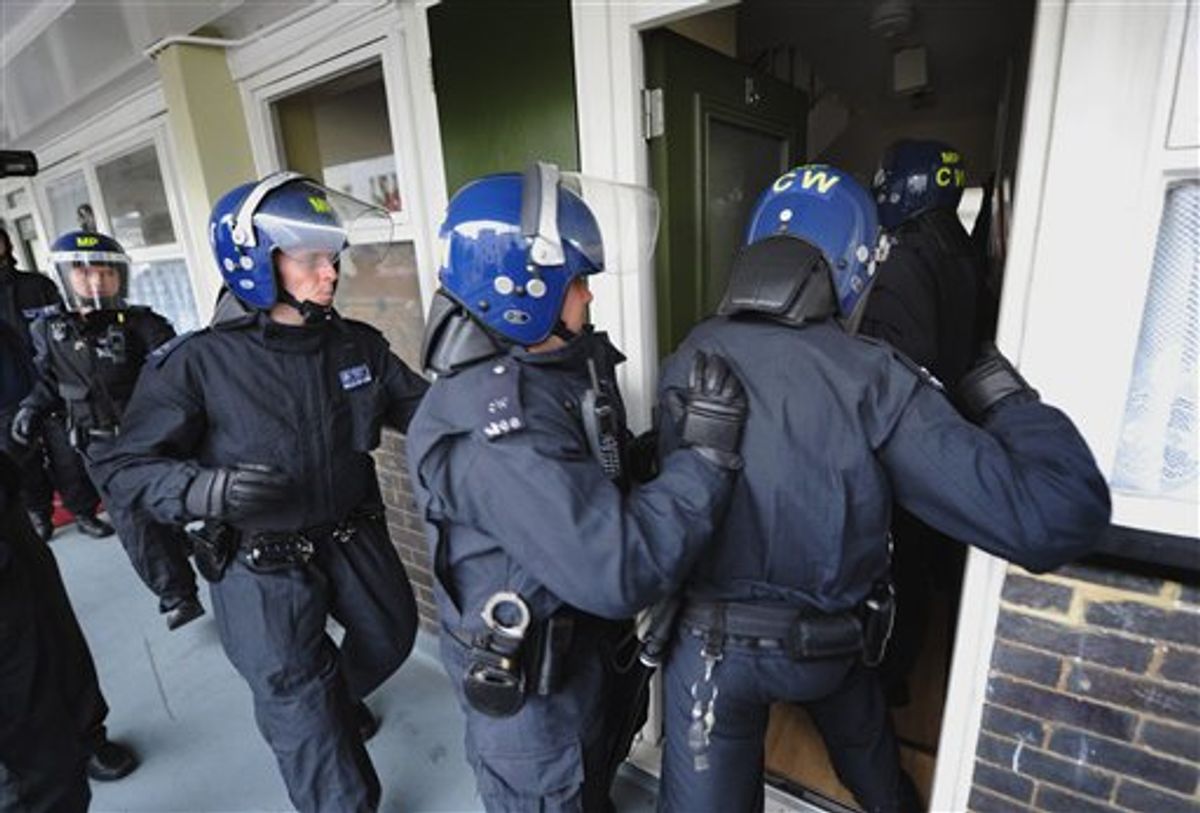 Police in London said Friday they have charged almost 600 people with violence, disorder and looting over deadly riots in Britain's capital, as the city's mayor said Londoners wanted to see "significant sentences" handed out to the guilty.

Across the country, more than 1,700 people have been arrested. Courts in London, Birmingham and Manchester stayed open through a second night to deal with hundreds of alleged offenders.

Hundreds of stores were looted, buildings were set ablaze and several people died amid the mayhem that broke out Saturday in London and spread over four nights across England.

Victims include three men in Birmingham run down by a car as they defended their neighborhood. Police are questioning three suspects on suspicion of murder.

And detectives opened a murder inquiry after a 68-year-old a man found in a London street after confronting rioters died of his injuries late Thursday. A 22-year-old man was arrested Friday on suspicion of murder.

Police, meanwhile, hit back against claims they were too soft in their initial response to the disorder.

Prime Minister David Cameron said officers had been overwhelmed at first, outmaneuvered by mobile gangs of rioters. He said "far too few police were deployed onto the streets. And the tactics they were using weren't working."

That changed Tuesday, when 16,000 officers were out on London's streets -- almost three times the number of the night before. Cameron said the extra officers will remain on patrol through the weekend.

Hugh Orde, president of the Association of Chief Police Officers, acknowledged that police had faced "an unprecedented situation, unique circumstances" -- but said it was police themselves, rather than "political interference," that got the situation under control.

"The more robust policing tactics you saw were not a function of political interference," he told the BBC. "They were a function of the numbers being available to allow the chief constables to change their tactics."

Cameron vowed "swift justice" for perpetrators, and courts were struggling to cope with a flood of defendants.

The alleged looters and vandals included an 11-year-old boy, a teenage ballerina, a university English student from a prosperous commuter town and Natasha Reid, a 24-year-old university graduate who admitted stealing a TV from a looted electronics store. Her lawyer said she had turned herself in because she could not sleep for guilt. A judge told her she would probably go to jail when she is sentenced later.

Another was Chelsea Ives, an 18-year-old chosen as a volunteer ambassador for next year's Olympic Games. She is accused of burglary, violent disorder and throwing bricks at a police car during riots in north London on Sunday.

Newspapers reported that Ives was charged after her parents saw her rioting on TV and turned her in. She was ordered detained until a court appearance on Wednesday.

Mayor Boris Johnson said it was fitting that "significant sentences" were being handed down.

"That is, frankly, what Londoners want to see," he said.

Although the rioters came from all Britain's ethnic communities, the violence stirred fears of heightened racial tensions -- especially in Birmingham, where three South Asian men were killed when they were hit by a car, reportedly driven by black youths.

Home Secretary Theresa May said she was banning a march planned for Saturday by the far-right English Defense League in the central England town of Telford amid fears of violence.

Britain's Parliament was called back from its summer break for an emergency debate on the riots Thursday, with Cameron promising authorities would get strong powers to stop street mayhem from erupting again.

He told lawmakers that he would look to cities like Boston for inspiration, and mentioned former Los Angeles, New York and Boston Police Chief William Bratton as a person who could help offer advice.

Bratton said in a statement he'd be "pleased and honored" to provide services and counsel in any capacity, adding that he loves London and has worked with British police for nearly 20 years.

Cameron also said the government, police and intelligence services were looking at whether there should be limits on the use of social media sites like Twitter and Facebook or services like BlackBerry Messenger to spread disorder.

BlackBerry's simple and largely cost free messaging service was used by rioters to coordinate their activities, Cameron's office said. An 18-year-old woman was charged Friday with using BlackBerry messaging to encourage others to take part in violence. Several others have been charged with inciting violence on Facebook and Twitter.

The government said it planned to hold talks with police chiefs, Twitter, Facebook and Blackberry manufacturer Research In Motion Ltd.

But any move to disable the services temporarily is likely to be strongly opposed by civil libertarians.