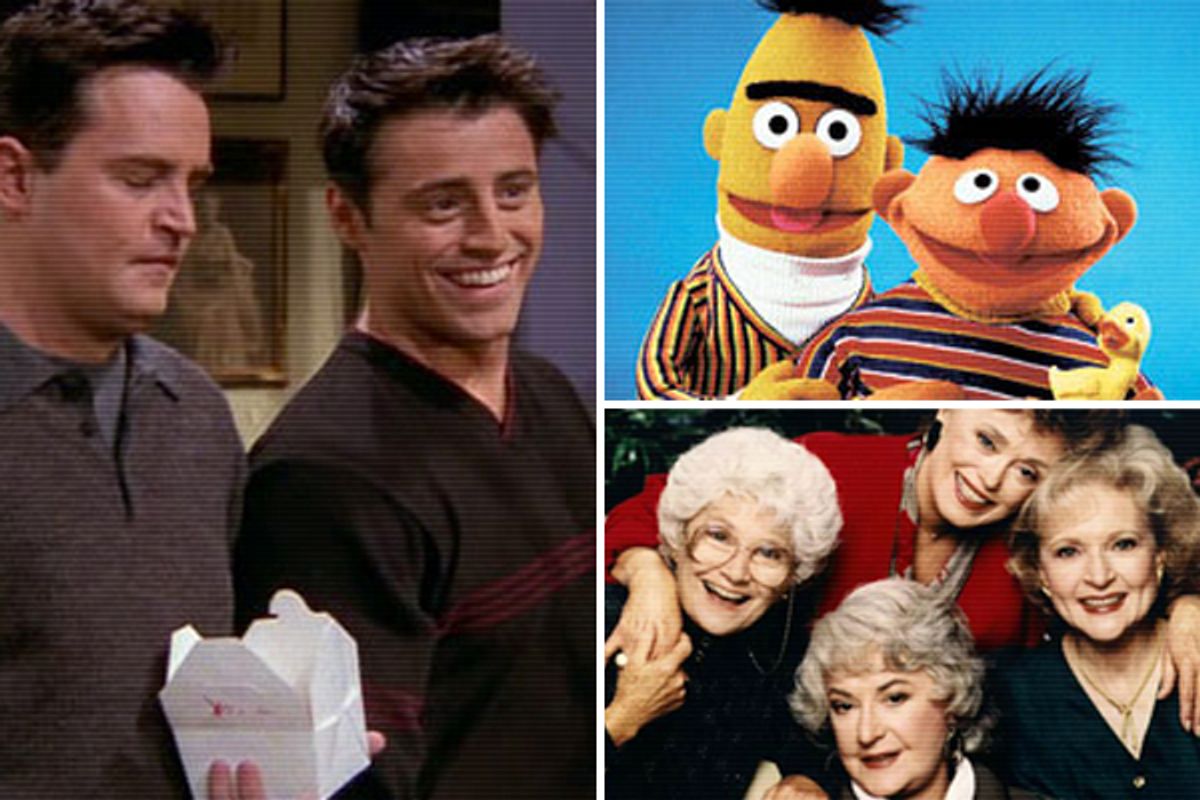 You can stop holding your breath for that Vows column announcing the union of longtime companions Bert and Ernie. Despite a recent groundswell to marry off the most enduring duo on "Sesame Street," the show's producers have announced definitively this week that "Bert and Ernie are best friends. Even though they are identified as male characters and possess many human traits and characteristics (as most Sesame Street Muppets do), they remain puppets and do not have a sexual orientation." Besides, Bert's the only gay one.

Society still may have a long way to go toward understanding -- and accepting -- the unique nature of puppet relationships. But the bigger question is -- can't two people sleep under the same roof without registering at Crate and Barrel? And in that spirit, we'd like to give a tip of the hat to television's other iconic roommates, the men and women who cohabitated without shacking up. Here's to you, Turk and J.D.; Will and Grace; Trapper John and Hawkeye; Janet, Jack and Chrissy and all the others who proved that splitting the rent doesn't mean you're soul mates.

Put four ladies in a house in Miami, and you'd think that'd be the perfect formula for some hot chick on chick action --- even if two of them were mother and daughter. Yet "The Golden Girls" endured without ever involving its main characters in any romantic entanglements with each other. They did, however, frequently address gay and lesbian issues, making Rose a same-sex crush object, and marrying off Blanche's brother to his boyfriend. And there was that one time Sophia tried to bust a move.

They may have gone through a bevy of ladies in their "Friends" years, but the guy love between Central Perk's favorite coffee achievers will go down in television history. And even though Joey famously once gave his buddy a gold bracelet, and was known to kiss him on New Year's Eve, Chandler eventually paired off with Monica.

They had all the makings of a great screwball romance -- the uptight fusspot and the lovable slob. They were even called "The Odd Couple" -- not the "The Odd Straight Men Sharing a Great Apartment." Yet Oscar and Felix were always too busy trying to "not drive each other crazy" to attain true domestic partnership.

TV's current reigning roommate champs may be the closest Bert and Ernie equivalent we have on prime time -- with Sheldon the undersocialized, asexual Bert to Leonard's more loose cannon Ernie. By geek standards, he even qualifies as something of a ladies' man.

Just because two "Bosom Buddies" live together and wear pretty dresses, that doesn't make them gay. And if you've ever tried to make it in the blood sport that is New York City real estate, you might consider cross-dressing and a Murphy bed too.

Despite their classic butch-femme dynamic and their nonchalance about dancing in the streets together, the Misses De Fazio and Feeney remained 1950s-era Milwaukee's most resolutely hetero duo. Regardless, Laverne somehow managed to come out of the closet every single episode for years.