Actresses pack it on and lose it again for "The Help" -- what's the big deal? 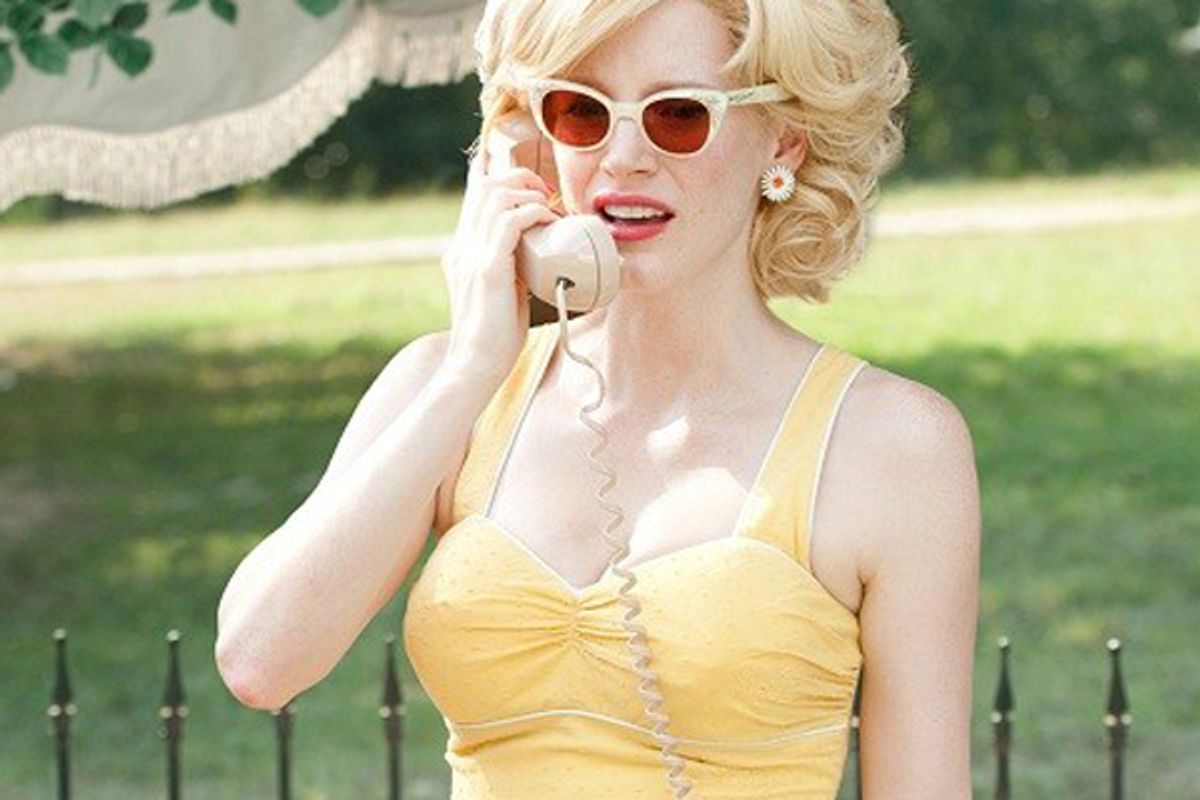 Jessica Chastain in "The Help."
--

The torments actresses have to endure for their craft. Stunt work. Dialect coaching. Eating ice cream.

For her role as the voluptuous Celia in "The Help," actress Jessica Chastain went the full De Niro, packing on a whopping 15 pounds. It was, she told US magazine this week, "a form of torture." And my God, look at her, lumbering around the film with all that extra girth. It's like a horror movie!

The vegan actress may indeed have been fighting her own natural body type to play her part, and her fighting weight regimen of melted soy ice cream does indeed live up to her description of "disgusting." Does the world really need another slender actress moping about she had to put on -- and I'm quoting directly here-- "all this weight"? Especially when her supposedly beefed-up version is still so damn slim?

The willowy starlet trying on something that resembles a real person's body for a part -- and the media fascination with her journey -- is nothing new. Ten years ago Renee Zellweger piled on 30 pounds to play the eternally dieting Bridget Jones in two hit films -- and still looked credibly hot. Now, a sequel has just been fast tracked, a third installment, and this time around Zellweger allegedly re-upped on the condition that she wouldn't have to put on weight this time around.

If you saw even a moment of "Country Strong," did you notice how Gwyneth Paltrow gained a dramatic 20 pounds to play a washed-up singer? Or did you just think, "hey, there's Gwyneth Paltrow"? Well, believe me, she and her crew felt every calorie. "It was frustrating for me," her trainer Tracy Anderson said earlier this year, "but they wanted her to gain." And Paltrow called the experience a "nightmare," telling Chelsea Handler last year, "At first I panicked, so I would work out a little bit and then I had to lie and be like, 'No, I didn't work out.' I'd be on the treadmill and be like, 'I really have to stop this.'"

To be fair, if you're petite of frame, 15 pounds -- even five -- can make a big difference in how you look and how you feel about yourself. And in an industry where your viability depends on flaunt your abs on the cover of Shape, packing on the curves must seem downright counterintuitive. But let's get real. Going from super-svelte to not quite as svelte, getting paid handsomely to go on a donut and beer binge -- these do things do not rate highly on the nightmare list of most ordinary folk.

That's why it's a pleasure to see that some other cast members of "The Help" let themselves get in the spirit of things and had a Southern-fried good time. On Paula Deen's show recently, both Bryce Dallas Howard and Viola Davis enthused about eating their way to artistic credibility. At the movie's premiere, Davis was still gushing, describing the perks of the movie as "There were no egos, no one wanted to be the star. And we got to gain weight!" And Howard, who also put on 15 pounds (where, little Bryce Dallas, where?) for the movie, told Access Hollywood, "It's like sort of a dream thing for an actor when they're told to gain weight" It was very easy to do in Mississippi, where they pretty much even fry the butter!"

It's a strange thing to change your shape, to feel unfamiliar in your own skin. Ask anybody who's ever trained for a race or been pregnant or even had an enduring stomach flu. There's something about moving up or down the scale, in and out of a pair of jeans, that brings about an intense identity shift. But there's something even odder about the media and audience obsession with weight gain and loss. It's the congratulatory magazine covers when a celebrity mom gets back in her "bikini body," the way that US gushes that "Fortunately for [Jessica] Chastain, she was able to get back to her trim figure quickly," as if being slightly curvier was such a freaking hardship, that are the really tortuous, disgusting things here. Gaining weight for a role may be a job. That doesn't make it an ordeal. And dropping it shouldn't automatically be a cause for celebration.