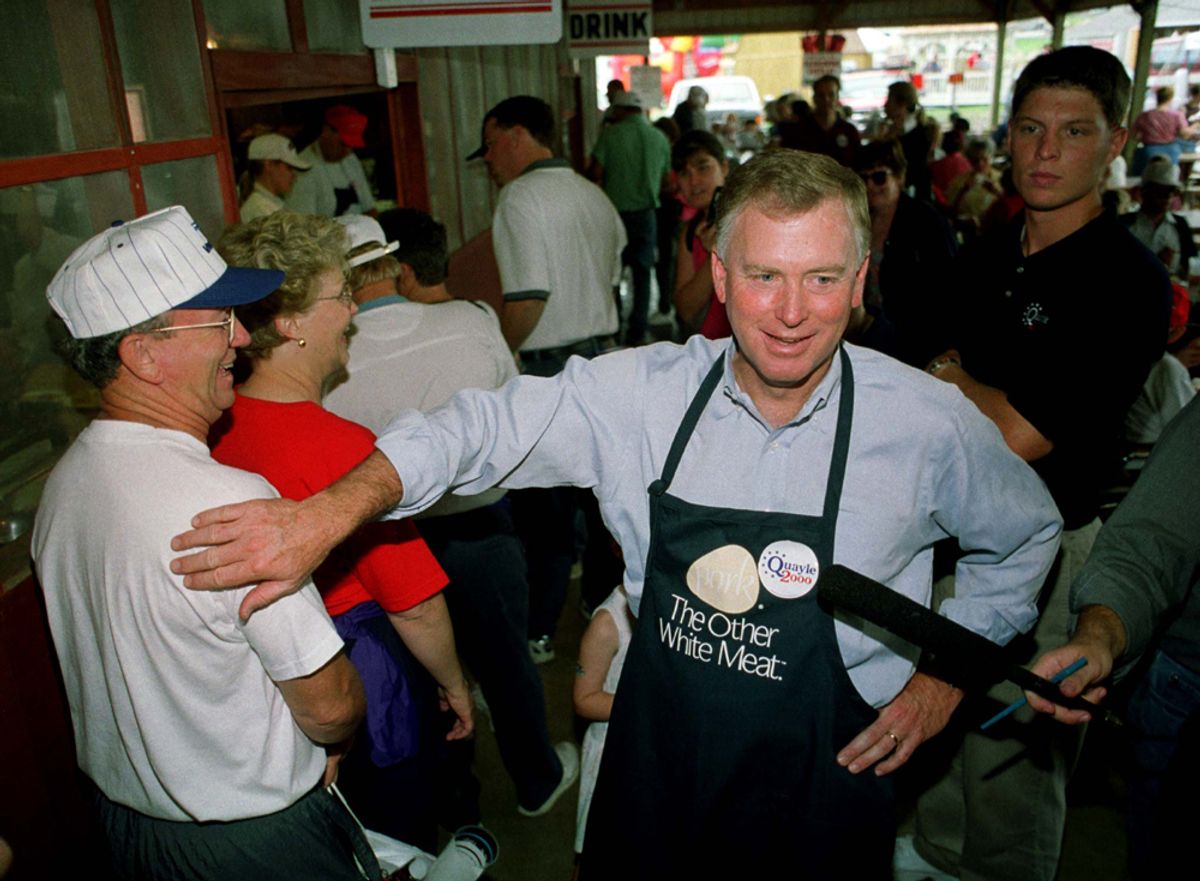 In the college town of Ames on Saturday, the American political calendar will once again intersect with the arcane folkways of Iowa, as the state GOP's much-derided, much-anticipated presidential straw poll kills off a few candidacies and perhaps gives fresh life to others.

Held only in competitive presidential cycles, the straw poll began as a publicity stunt in 1979 (following the precedent of a Democratic straw poll that had been held in 1972 and 1975, but that was then discontinued), quickly became the Iowa GOP’s major fundraising event, and assumed gigantic proportions as the first formal test of the nominating process by the mid-1990s.

Those who deplore Iowa’s outsize (but zealously defended) role in presidential politics often point to the straw poll as a monstrous extension of the distortions and parochialism imposed on the rest of the country by Heartland Hegemonism. The event has lengthened the campaign season, made ethanol subsidies a crucial issue in Republican presidential politics, increased the already formidable power of the Christian right, and in general complicated the lives of candidates and their strategists, who are forced either to propitiate or defy the Corn Idol months before the first real votes are cast.

The straw poll itself is a far simpler event than the Iowa caucuses (just as the Republican version of the caucuses, in which participants show up and vote for a candidate, is far simpler than the byzantine vote-swapping exercise used by Democrats) -- a rolling single ballot held during a day of speechifying and, this year, after an earlier candidate debate in Ames, which was held Thursday night and was sponsored by Fox News and the Washington Examiner.

The straw poll’s reputation for corruption was once based on the absence of any requirement that voters prove Iowa residence. This was corrected after Sen. Phil Gramm allegedly bused in vast numbers of interlopers in 1995 to stuff the ballot box (he succeeded in tying Bob Dole for first place).

Nowadays the stench of malfeasance emanates from the basic structure of the straw poll: The $30 tickets required for voting privileges can be (and usually are) purchased by campaigns, along with transportation to the event (a big deal since parking is limited) and lunch. Well-heeled campaigns can also secure an advantage by bidding high during an auction for headquarters sites (the source, along with ticket sales, for the state party’s haul from Ames), where huge air-conditioned tents can be erected and hospitality can be extended. Ron Paul secured the choicest site this year, for a bid of $31,000. Michele Bachmann appears to be offering the most in the way of bread-and-circuses, with a country-and-Christian musical lineup featuring Randy Travis. Only those candidates who bid for headquarters sites will be allowed to speak inside the voting site, the Hilton Coliseum.

Inherently, then, the straw poll is a test of money and organization as much as voter support or enthusiasm. Voting attendance is expected to be under 15,000 -- not a big number considering the event’s impact, but also not a completely unrepresentative slice of Iowa GOP activists (118,000 total votes were cast in the 2008 Republican caucuses). Efforts to "buy" the straw poll (aside from Gramm’s cross-border raid) haven’t generally been successful. Steve Forbes spent an estimated $2 million on Ames in 1999, and while he and George W. Bush managed to boost attendance to an all-time high of 23,000, Forbes finished a relatively weak second. Mitt Romney won in 2007 after an extravagant investment of time and money, but the real news was the second-place finish of the grotesquely underfunded Mike Huckabee. Huck, however, took advantage of a preexisting organizational infrastructure of evangelical churches and allied social conservative organizations, just as televangelist Pat Robertson did when he shocked everyone by winning the 1987 Straw Poll (a much less visible event back then).

In this year’s straw poll field, the "book" is that Tim Pawlenty has the best organization, Michele Bachmann the most enthusiasm, and Ron Paul perhaps the best combination of the two. Among the candidates with a significant following, Herman Cain has suffered most from a poor organization-to-enthusiasm ratio (a problem compounded by his oddly light Iowa campaign schedule up until the final days), while Rick Santorum has rivaled Pawlenty in building a statewide organization and campaigning everywhere. It’s not clear any one candidate has a decisive advantage among the politically mobilized evangelical churches, though Bachmann recently released a long list of clerical endorsements.

The value of a straw poll win or high placement is debatable, and usually depends on expectations and context. Three of the five straw poll winners (George H.W. Bush in 1979, Bob Dole in 1995, and George W. Bush in 1999) have gone on to win the caucuses; Dole and Bush 43 went on to win the nomination the next year. Another straw poll winner, Robertson in 1987, was the big story in the caucuses when he finished second, ahead of eventual nominee Poppy Bush. And Huck’s the obvious example of how someone beating expectations in the straw poll can get a leg up in the caucuses. The only "winner" who went on to bomb was Gramm, who after tying Dole in Ames in 1995, actually neglected Iowa for Louisiana (which held its caucuses before Iowa that year), where he lost to Pat Buchanan and soon went belly-up.

What’s clearer is that Ames can be a candidate-killer. In 1999, Dan Quayle, Lamar Alexander and Liddy Dole began the cycle as very serious candidates. Quayle and Alexander bombed entirely in the straw poll, and Dole fell short of expectations; all three candidates were soon out of the race. In 2007, Tommy Thompson and Sam Brownback (Huckabee’s main rival for hardcore social conservative support) dropped out after poor showings in Ames. Nowadays hopeless candidates sometimes hang on in order to get free exposure for their causes and personal projects in candidate debates, but aside from the already-left-for-dead Newt Gingrich (who is not even competing in the straw poll), Cain, Santorum and, most of all, Pawlenty, are the candidates most in danger of running on fumes if they perform poorly on Saturday. Even Bachmann is under a lot of pressure; her momentum would be stopped if she doesn’t win in Ames. And the whole field is operating under the shadow of two Big Dog candidates who aren’t showing up for the straw poll, Mitt Romney and Rick Perry.

The Conventional Wisdom (and the explicit advice of the cash-hungry Iowa GOP) is that candidates who don’t compete in Ames should probably forget about competing in the caucuses. Romney, for whom Iowa turned out to be a money pit and a momentum-killer in 2008, is still remaining ambivalent about whether he is skipping Iowa entirely (like John McCain in 2000); making a minimal effort and keeping expectations low (like John McCain in 2008); or abruptly going for broke in the caucuses, hoping for an early knockout win (despite his coolness to the state, he’s still running well in the polls there). Perry, meanwhile, upset some influential Iowans by scheduling an apparent announcement of candidacy in South Carolina on the very day of the straw poll, but is racing up to Iowa the very next day to pay his respects to the Corn Idol (creating a potential mega-event at a county GOP fundraiser where Bachmann is also going to appear), and could be very competitive, particularly if T-Paw and/or Bachmann are damaged by their straw poll showings.

If that’s not distraction enough, Sarah Palin will apparently be making a sudden trip to the Iowa State Fair, just 30 miles south of Ames, on Friday. Yes, it’s the time of the cycle when there are so many presidential candidates in Iowa, actual or potential, that you can't stir 'em with a stick.