Never heard of Ayrton Senna? Don't care about Formula One? This documentary's so exciting it won't matter 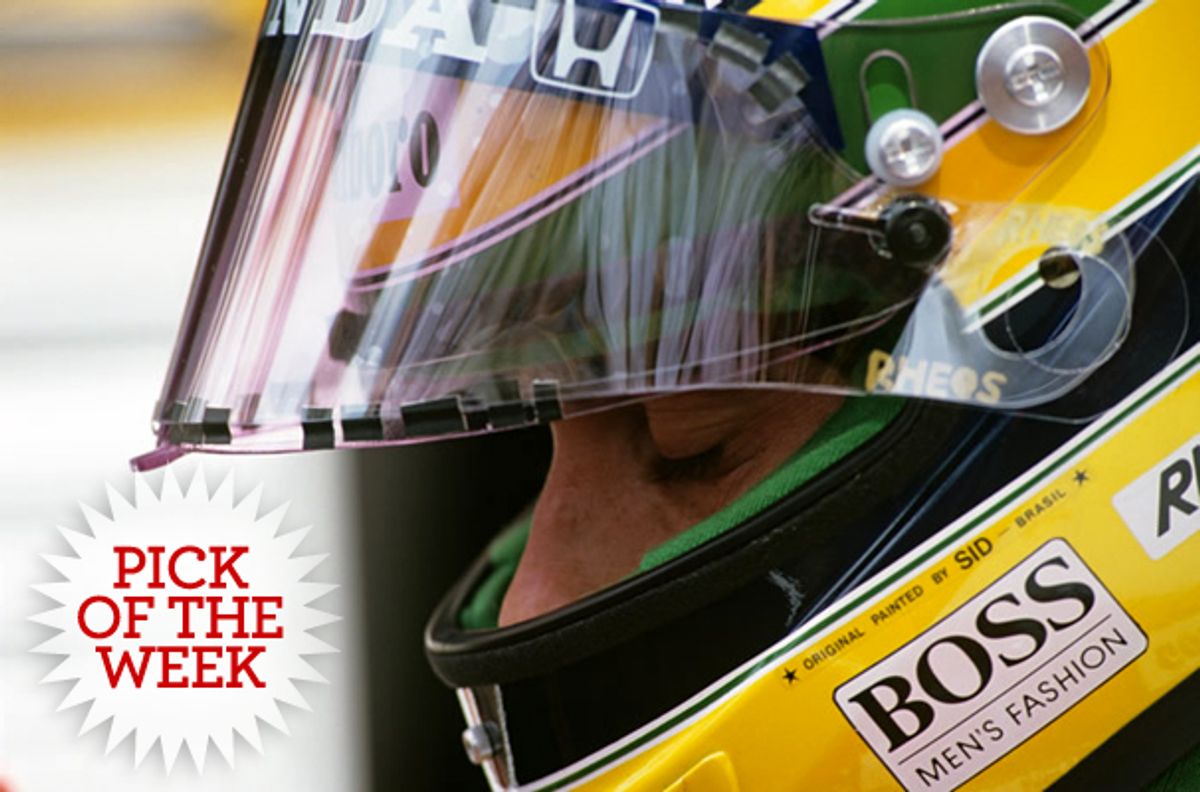 It's not that hard to understand why sporting events often produce such terrific documentaries, even if you're not all that interested in the sport in question. Human competition is inherently dramatic, and sports most often involve graceful, charismatic and good-looking specimens of humanity. Moreover, what athletes may lack in verbal facility or introspection can be supplied in the movies by context and commentary. And while you really have to be interested to sit through an entire World Series game or motor race or cricket match, a filmmaker can show you the most exciting moments in a tiny fraction of the time. Is there anyone alive who doesn't prefer those NFL Films presentations, with the rumbling, martial soundtracks and the ultra-slo-mo close-ups, to the herky-jerky, beery tedium of an actual professional football game?

Even by those standards, British filmmaker Asif Kapadia's "Senna" is an unusually strong sports doc, one that should effortlessly leap across the gap between its core audience and the larger pop-culture universe. I promise: You don't have to know or care anything about Formula One auto racing, or ever have heard of the legendary Brazilian driver Ayrton Senna, to become fully drawn into this film's universe. It's pretty much accurate to describe Senna as the Pelé or Muhammad Ali of his sport, a personality who transcended his limited environment, and Senna's story has a tragic, mythic dimension theirs do not. A rich kid from a poor country, Senna became a national hero and an international celebrity without ever losing his reserved, aristocratic demeanor. Even when Kapadia shows us footage of Senna as a lanky, handsome teenage go-kart racer, there's something grave and haunted about his manner, and it's nearly impossible to resist the fallacy that he could see the future, in which he would get all the victories and fame and girls he wanted and then die young.

I'm about to discuss the major elements of Senna's biography, so if you want to see the movie without knowing the story, the place to hit the eject button would be right here. A pampered kid from a blue-blood São Paulo family, Ayrton Senna da Silva conceived an early desire to drive race cars and immediately displayed a remarkable gift for it. (As in many traditional Latin American families, he used his mother's surname.) His parents supported him, and there was a widespread perception in later years that they had bought his way into Formula One, the glitzy, high-speed, gearhead pinnacle of the racing world. As Kapadia demonstrates in plenty of exciting race-day footage, from his first Formula One appearance Senna stood out for his reckless, fearless speed, and his ability to gain ground in bad weather that terrified other drivers. In his first-ever appearance at Formula One's premier event, the 1984 Monaco Grand Prix, Senna nearly beat veteran French star Alain Prost despite driving an inferior car through heavy rain -- and probably would have, had Prost not convinced officials to end the race early.

Prost and Senna became the Muhammad Ali and Joe Frazier of 1980s auto racing, with the added twist that they were both rivals and, for several years, teammates with the McLaren racing franchise. Prost was a calculating technician who pursued championships with ruthless efficiency, while the taller Senna, with his aquiline good looks and reserved demeanor, was an aficionado of "pure racing." (I remember Prost fans saying that Senna looked less like a real racing driver than like an actor playing one in a movie, and that's about right.) They were friends, then bitter enemies and finally forged an uneasy peace toward the end -- but except for Prost loyalists, there can't be much doubt which of them was better. That 1984 victory at Monaco was the first of four for Prost, but Senna would win the race six out of seven times between 1987 and 1993. Prost won four Formula One championships to Senna's three, but Prost had retired by the time Senna died, in a still-mysterious 135-mph crash at the 1994 San Marino Grand Prix. It's almost certain the latter would have won several more had he lived.

Kapadia has an immense wealth of material to draw on in portraying the Prost-Senna rivalry, because even if most Americans had never heard of them the rest of the world had, and everything they did was observed by a phalanx of cameras. "Senna" features extensive backstage footage at numerous Formula One locations, including the tense pre-race meeting where drivers confront each other and authorities over regulations and safety conditions. We see home videos made by the Senna family and hear extensive voice-over interviews from many people who knew Senna well, including his sister Viviane, racing-team chiefs Ron Dennis and Frank Williams, racetrack physician Sid Watkins (a longtime friend who treated Senna on the track after his fatal injury at San Marino), and racing commentators John Bisignano and Reginaldo Leme.

There's a lot of exciting intrigue in the story of Senna's greatest racing seasons, including his suspicions that Formula One head Jean-Marie Balestre was not-so-subtly favoring his French countryman Prost, and the stranger-that-fiction fact that close battles for the championship between Prost and Senna were decided two years running by crashes at the Japanese Grand Prix. That's without even going into the fateful, can't-look-away drama of that dreadful weekend in Imola, Italy, in 1994, where Senna was driving a fast but unreliable Williams-Renault car with multiple mechanical difficulties. A day before the race, Austrian driver Roland Ratzenberger was killed in practice, and another driver and several spectators were seriously injured. Sid Watkins remembers talking to Senna after Ratzenberger's death and suggesting they both quit the auto-racing world and go fishing. Senna declined, and just hours before his death held a meeting with his fellow drivers where he volunteered to lead a group aimed at strengthening safety. (In fact, there have been no Formula One racing fatalities since then.)

"Senna" is such a vivid and powerful film about a larger-than-life personality that I hesitate to criticize it, but racing aficionados will notice a heavy and perhaps inevitable degree of hagiography. Kapadia never mentions, for instance, that Senna ultimately admitted causing his 1990 crash with Prost deliberately, both to eliminate the Frenchman from the championship and to retaliate against race authorities for perceived unfair treatment. Likewise, we never learn about Senna punching out Irish driver Eddie Irvine for "unlapping" himself, a violation of racing protocol, or about other incidents that gained the Brazilian a reputation as an unpredictable hothead. That's really too bad, because that stuff would only have added to the complicated portrait of this populist hero from the nosebleed classes, who at some moments resembles an arrogant and entitled jet-setter but was also (according to those who knew him best) a humble and devout man who gave away millions to the poor. It isn't necessary to call Senna a saint in order to recognize that he was both the greatest top-level racing driver of all time and an iconic, storybook character, even before his death elevated him (at least for Brazilians and racing fans) to the immortal sphere occupied by JFK or Marilyn or Elvis.