Why Hollywood keeps whitewashing the past 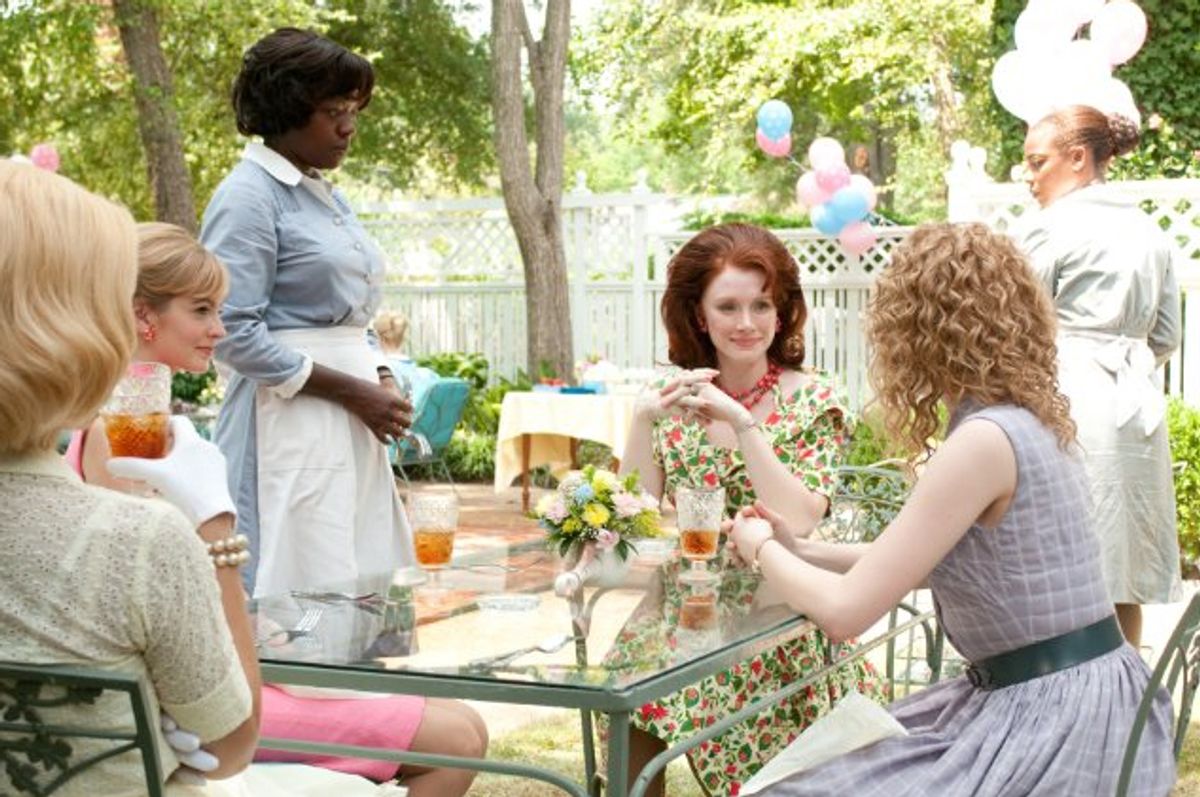 [EDITOR'S NOTE: This piece contains spoilers; read at your own risk.]

American historical films are forever refighting old wars, congratulating themselves for being on the right side, and encouraging viewers to pat themselves on the back for being on the right side, too. They view the war from the general's tent up on a distant hill and imagine that they're right in the thick of it. That's how Paul Haggis' "Crash" swept the Oscars in 2006 -- by serving up a contemporary story of Los Angelenos who said and did brazenly racist things in public constantly, as if it were 1967 and everyone was wearing love beads, Afros and hard hats. The characters seemed crude and primitive, lacking in self-awareness, unenlightened; this made them easy to label, judge and dismiss. A variation on this strategy has enabled another race drama, "The Help," to become an instant hit, a likely Oscar contender, and yet another reminder that when mainstream cinema depicts discrimination, it tends to ask the same two questions: "How did this affect white people?" and "Aren't you glad you're not bigoted like the creeps in this movie?"

Based on the 2009 novel by Kathryn Stockett, and endorsed by Oprah Winfrey and Tyler Perry, this civil rights-era movie about a young Caucasian writer telling the harsh but true stories of African-American domestics appears to grant the stories of its white and black characters equal weight. It even gives the voice-over narration to one of the maids, Aibileen Clark (Viola Davis). But the pretense of dramatic equality collapses if you look at what's actually happening on-screen, and what got marginalized or omitted.

This isn't the story of beleaguered domestics standing up for themselves during a time of American apartheid. It's the story of a perky proto-feminist writer (Emma Stone's "Skeeter" Phelan) cajoling black women into standing up for themselves by telling her their stories and letting her publish them in book form. It's about what a good-hearted and tenacious person Skeeter is, and how lucky the maids are to have met her. When Skeeter's insufferable childhood friend, a heartless, racist social climber, pushes her to publish an article in their Junior League group's newsletter urging whites to build separate restrooms in their homes for black domestics, she resists for several weeks, then engineers a spectacular, lowbrow prank as a protest. When her book is finally published, we see a clerk displaying it prominently in a downtown bookstore window and old white ladies openly reading it in public, as if it were "Profiles in Courage" or "Calories Count."

There was no real-life book similar to Skeeter's magnum opus; it's a fictional flourish that feels like a college-educated white liberal's wish-fulfillment fantasy of how she would have conducted herself had she been time-warped back to the civil rights era. I wouldn't have just stood by and let it happen. I would have done something! Something brave! This silliness reminded me, perversely enough, of an old Eddie Murphy routine tweaking macho black males' fantasies of how they would have behaved if they'd lived in the pre-Civil War South: "Brothers act like they couldn't have been slaves back 200 years ago ... 'I wish I was a slave! I would f--- somebody up!'"

And so, yet again, for what seems like the zillionth time, a heart-tugging Hollywood film transforms a harrowing and magnificent period of African-American life into a story of once-blinkered white people becoming enlightened. The black characters' struggles are sensitively rendered, magnificently acted, and sometimes heartbreaking sideshows. Although Viola Davis' subtle performance anchors the movie, and will likely earn this perpetually underrated actress an Oscar nomination, giving Aibileen the movie's voice-over won't fool anybody. This is Skeeter's movie. She's the one who sets the plot in motion. Without her youthful idealism, these downtrodden black women would have continued to suffer in silence.

This sort of thing just keeps happening and happening and happening, The 1990 civil rights drama "The Long Walk Home" was told from the point of view of a young white girl whose mom (Sissy Spacek, who has a supporting role in "The Help") drives their nanny (Whoopi Goldberg) to work during the 1955 Montgomery bus boycott. "Mississippi Burning" turned the 1964 murder investigation of Michael Schwerner, Andrew Goodman and James Chaney into a potboiler about two FBI agents (Willem Dafoe and Gene Hackman) solving the case through vigilante violence and intimidation; African-Americans were depicted as a mass of marchers and mourners. The 1996 film "Ghosts of Mississippi" told the story of a heroic white prosecutor, Bobby DeLaughter (Alec Baldwin), trying and convicting Byron de la Beckwith (James Woods), the man who murdered civil rights activist Medgar Evers in 1963. The Evers assassination becomes a piece of historical atmosphere in "The Help" -- a means of raising the stakes, as hack screenwriters love to say, for plucky Skeeter and her interviewees.

Maybe this entire phenomenon originated in Harper Lee's 1962 bestseller "To Kill a Mockingbird," which wasn't about a black man's wrongful prosecution for rape, but an incorruptible white lawyer showing his kids how to be decent by standing up for black people. The book's defendant, Tom Robinson, loses his life; his defense attorney, Atticus Finch, loses social stature. The narrator is a young white girl.

It's not just African-American stories that get whitened up for film. "Cheyenne Autumn," "Soldier Blue," "A Man Called Horse," "Little Big Man," "Dances With Wolves" and "Geronimo" viewed the 19th century destruction of Native-American culture through the eyes of white folks. "Come See the Paradise" viewed the internment of Japanese-Americans during World War II through the eyes of a white union organizer who had fallen in love with a beautiful Japanese-American detainee."Cry Freedom," "A Dry White Season," "Invictus" and both film versions of "Cry, the Beloved Country" were mainly interested in what happened to white people's consciences when black suffering stopped being an abstraction and started to affect them personally.

I've heard somewhat sheepish arguments to the effect that the white folks' stories take center stage in these films because they're more clearly dramatic. Why? Well, you see, it's because drama -- commercial mainstream drama, anyway -- is about people learning, changing and growing, and the non-white characters' stories are less dramatic because they already know discrimination is bad, which means their "arcs" are inherently less interesting. No, I promise you, some moviemakers really do think this way. The only proper response to this kind of thinking is to smack one's forehead -- or better yet, the filmmaker's -- with a tack hammer. At least it's offered timidly and rarely, and as a commercial rather than an artistic defense.

Even more problematic is the overriding sense -- conveyed not just in "The Help," but in so many historical movies -- that the era being depicted is tucked safely away in the past, a closed chapter, and the collective insanity that gripped society has dissipated thanks to the efforts of good-hearted people like you, the viewer.

It is inconceivable that any viewer of any race, age or gender could look at the bigoted, greedy, petty, pinch-faced shrews who torment poor Aibileen and her colleagues and think, "That person reminds me of myself," or "I know somebody like that." They're not fully rounded, likable people who happen to have a few revolting qualities, and who therefore complicate our reactions. They're paper targets that the film can pepper with rhetorical buckshot. One of these women is so reprehensible that when she fires her domestic, Octavia Spencer's Minny Jackson, for daring to use the white folks' toilet, and Minny "apologizes" by giving her a chocolate pie with her own feces baked into it, the movie doesn't just insist that we understand why Minny did it; it actively encourages us to cheer her on. And when Minny's revenge becomes the most talked-about anecdote in Skeeter's book, and white Jackson society deduces the real identity of the pie-eater, she is publicly ridiculed by everyone she knows, over and over. "The Help" never stops laughing about it. It's this civil rights drama's equivalent of the deli scene in "When Harry Met Sally" -- a comic high point. You can't feel guilty for laughing because the character is such a horrible bitch, a sphincter in vintage.

It might not be a bad idea for filmmakers to lay off the big, tried-and-true historical topics for a while -- civil rights, slavery, the Holocaust, America's righteous participation in World War II, the moral tragedy of Vietnam -- and deal with more recent eras. I'm not suggesting anything radical. I mean "something that happened 20 years ago as opposed to 50." Movies about actual recent history -- 9/11, Iraq, the financial meltdown, the dog-whistle racism of 21st-century America -- tend to bomb.

Better yet, filmmakers could deal with controversial subjects by way of metaphor or parable. This sounds like a dodge, but it could be liberating. And it couldn't possibly yield a more tepid movie than "The Help." As engrossing as it is, it's still a white liberal fantasy in historical drag -- "Crash" with smiles and hugs.