Daddy is a wimp

I can't throw a ball. I'm afraid of heights. But my biggest fear is looking like a coward in front of my daughter 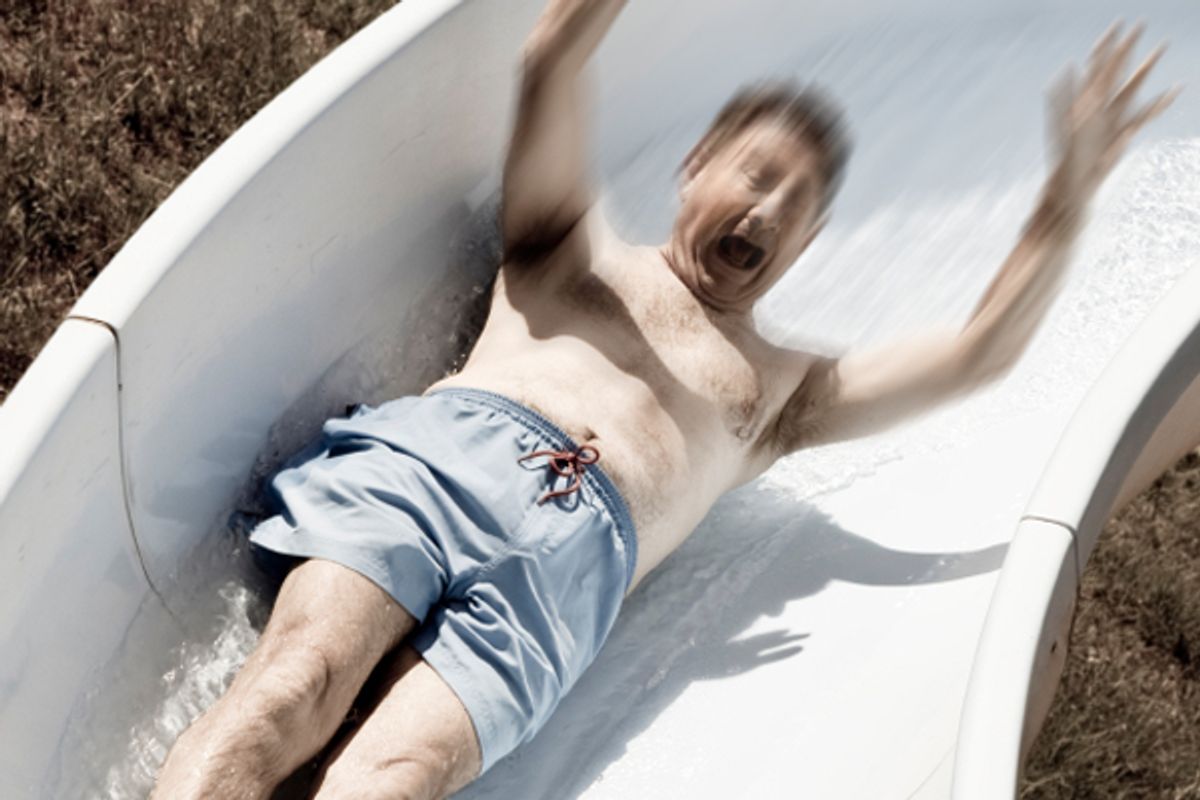 My daughter and I were walking briskly through a gigantic amusement park, past a huge pegboard loaded with bizarre, oversized dolls resembling Sponge Bobs on steroids, when Alexandra popped the question I was dreading.

In her six years on this earth, the word "Domo" had never before left my daughter's lips, not once, not ever, but that's the nature of the beast. Silly Bandz and Uglydolls yesterday, some Japanese TV mascot called a Domo today, a yet-uninvented fad tomorrow. But the problem wasn't my daughter's fickleness. The problem was something else.

I glanced at the arcade in front of me. Not one of those ring-the-bell-with-brute-strength things. Whew. I'm no weakling, but strength has never been my, well, strength. Nor, thank God, did it involve a hoop. The last time I played basketball, Captain & Tennille were topping the charts. And I was quite relieved to see this particular game didn't require shooting anything with a gun. My scientist father played tennis my entire childhood: white sneaks, white socks, white shorts, white shirt. An NRA family we were not.

Nope, in this case the skills necessary to win said Domo were pretty straightforward. A bucket of baseballs, painted strike zone, canvas muslin backdrop. And in an instant -- because those of us who spent half of junior high gym period in the boys' room pretending we had to go reaaallllllly bad will tell you it only takes an instant -- I figured a way out.

"I thought you wanted to go on the Zoom Flume," I said, seamlessly changing gears. It sounded plausible. Plausible enough, because what I should have said was this: "Daddy can't throw to save his life." Of course, you don't say things like that to your 6-year-old. You just think them, over and over.

I used to love amusement parks. Places like Adventurer's Inn in Farmingdale, N.Y., where in my mind Billy Joel will forever be singing about some bottle of red. No death-defying rides back then; today's coaster industry was just on the verge of exploding when I was a teenager. But you didn't go to places like Adventurer's Inn for the scary thrills anyway. I'd go to see if Raina, my first crush, was there that night with her friend Laura; or to discuss Emerson, Lake and Palmer's newest 11-minute song, and how it compared to ELP's previous 15-minute opus; or to spend an hour engaging in an intense grammatical debate with my friend David over whether the place was named Adventure's Inn, Adventurers' Inn or Adventurer's Inn, singular. Geeks Gone Wild.

Mostly what we did there, actually, was play Skee-Ball, the bowling game with the wooden balls. Those tickets spitting out like sausages! I was a bit of a prodigy, carefully mastering the art of the bank, the only way to nail the big scores. Fifty-six consecutive plays, 790 tickets and that puka shell necklace would be mine.

Something in those nights must have left an impression. Later in life, as a news photographer, I was a risk taker. I raced across Panama's Bridge of the Americas during the U.S. invasion, 90 miles an hour in a Humvee, screaming with excitement the whole way. Though my wife doesn't believe me, I've jumped out a plane. Twice. I wriggled my way through an Egyptian tomb that hadn't seen a torch since 1200 B.C. and had rocks thrown at my head during the Los Angeles riots. Like any good journalist, I kept the rocks, which now sit in a plastic tub in the basement, "L.A. Riots '92!!" scrawled in Sharpie upon them.

Now, as the half-century mark looms, those things seem comical if not downright impossible. The reason my wife doesn't believe that I jumped out of a plane is that she's had the unfortunate luck of having to sit next to me in turbulence on one too many a cross-Atlantic flight. Errol Flynn? She's convinced I'm Elmer Fudd. And she may well be right. I don't even have to be airborne to be a mess of anxiety. Driving over the Chesapeake Bay Bridge will do just fine.

But of these phobias, the one that fills me with the most fear has nothing to do with heights or bridges or small spaces, or pretty much every ride at the amusement park in which we currently find ourselves. What I fear most is being a chicken in front of the one person in my life whose brain is still soaking things in, not leeching things out.

Years ago, when the croc guy, Steve Irwin, died tragically, his young daughter Bindi said, "Everyone thinks they have the greatest dad in the world. But I really did." Except for the crocodile part, which I would never do, needless to say, that's pretty much how I feel about my own daughter. From Alexandra's first memorable, cohesive sentence at 3 -- "Daddy, I think I need to ask my doctor about Lunesta" -- to her dutiful memorization of Bruce Springsteen's "Thunder Road" at 4, sparing me at least a year of the Wiggles, my daughter is pure joy. And each year brings more: a twig of a kid playing ice hockey, a wicked sense of comic delivery, a love of artichokes, the way she pronounces the word AWE-some, all first syllable.

Because of her, I know what a narwhal is (a whale that's apparently been crossed with a unicorn), what owl pellets looks like (regurgitation souffle), and who's hot on Radio Disney (I sometimes find myself listening to Selena Gomez and the Scene a good 30 minutes after I've dropped her at school). And because of her, the thought of looking like I can't walk up the stairs of a silly water park ride, no matter how many there are, or how high and unprotected they may be (Hello?!? Is there an OSHA inspector in the house?), is out of the question. Alexandra may have a short memory -- "win me a Domo!" has morphed into "Zoom Flume! Zoom Flume!!" now -- but her daddy remembers everything.

And some of what I remember is this: The reason I spent so many gym periods hiding in the bathroom back in the mid-70s is because I didn't know how to hit or throw or catch. I never once played catch with my own father.

"Are you sure you don't want to get some frozen lemonade?" I ask, which I'm told in Swahili means, "Daddy is terrified of heights."

As I say this, I happen to be standing underneath a gigantic, two-story bucket of water near the kids pool, one that slowly fills itself until dumping its load on the bathers below. My kind of ride. I look across the park at a line of people in bathing suits snaking up an endless set of stairs and my pulse begins its own steady climb. A minute later we're ascending, ever so slowly, me fixated not on the thrilling raft ride down but on the dizzying ascent up. I chat up a father and son who are in line behind us, mainly to take my mind off the fear, though it does give me a chance to do the requisite, manly there's-nothing-to-be-afraid-of spiel in front of another parent. "This is gonna be AWE-some!" Alexandra squeals and I, lying through my teeth, concur wholeheartedly. Half an hour later, giggling down a raging rapids, the fear finally turns to fun. "Again!" Alexandra yells, though I thoughtfully remind her about that lemonade.

And that's when I fell into the trap, how I met my Waterloo at the water park. You see, to get to the frozen lemonade, you've got to walk right past the softball toss game, which, like its baseball pitch cousin, had disaster writ large. "Daddy, can you win me something? Please, Daddy?"

No escape this time. One softball into a basket wins. Easy. I hand the kid $6, but like a Vegas croupier he points to a slot and motions for me to push the bills through. The attempt ends as quickly as it starts: three balls, three misses. Alexandra looks a bit crestfallen, but I'm just getting started. "Let's go again," I tell the kid, a circular motion of my finger, and another six bucks are pushed through the slot.

Pffft! goes ball number 1 as it hits the surrounding straw. I'm sweating now and it has little to do with the brutal heat. I toss again. Pffft! Last ball. Pffft! This is just like Vegas, I think -- it's a freaking money pit. I reach deep into my cargo shorts, still soaking wet from the Zoom Flume fiasco, and pull out my last six ones.

But wait. My guy is trying to tell me something. This young kid, not some grizzled carny but a name-tagged teenager destined for the Ivy League, or at the very least a William and Mary, a young man whose own parenting days still lay light years ahead of him, leans in.

"Don't go for the basket," he whispers, like a guy giving a tip at the racetrack. "Hit the top rim. It'll deaden the throw and the ball will fall straight down without bouncing."

The Rosetta Stone! The secret of the Houdini's water torture trick! Who "You're So Vain" is about! For the first time in my life I'm on the inside, and with my last three tosses I will finally reclaim my rightful place in the pantheon of fatherhood.

Deep breath. I line up my throw, steady my hand, and aim straight for the top collar of the basket. Deaden the throw, he said. I release the ball. But this one doesn't just miss the basket, it misses the actual game, rolling on the asphalt path that lead back towards the water rides.

Tears well up in Alexandra's eyes. Not the tears of a whiny kid who wants a cheap-o stuffed animal, mind you, but of a girl who just wants her father to succeed. (And hadn't I? Surely they've got some prize here for a kid who can singled-handedly expose all of her dad's weaknesses in one Kings Dominion outing. Perhaps a smaller Domo.)

Panicking, I feel an overwhelming need to rescue her. But Alexandra, frozen lemonade running down her chin, senses her daddy needs a bit of rescuing himself. So with a sigh and a cocked eyebrow, her version of a poker tell, and proving beyond a shadow of a doubt that she is the inheritor of at least some of my DNA, my daughter looks at me and says, "What about Skee-Ball? You're great at that!"

I look down, past the eyebrow, past the smirk, right into the space where her front teeth used to reside, and the need to win a jackpot evaporates instantly. I know I got that already.

Matt Mendelsohn is a writer and photographer living in Arlington, Virginia. He has worked at UPI and USA Today as a photojournalist, and his writing has appeared in the New York Times, the Washington Post and AOL News.