Let the fight for the right begin

Rick Perry hoped to upstage her, but Michele Bachmann's straw poll triumph means there's a real race on the right 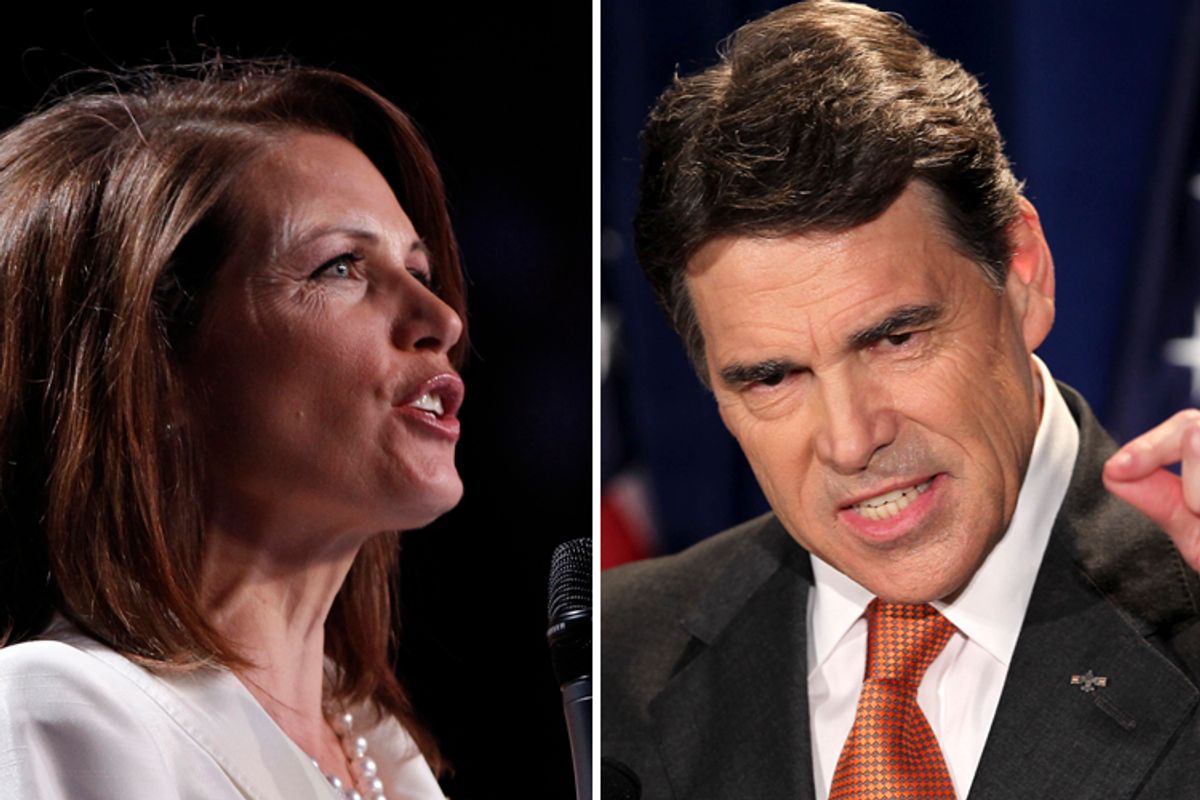 Technically, the margin of victory for Michele Bachmann at Saturday's Iowa straw poll was slight, with second-place finisher Ron Paul falling just 152 votes (or 0.9 percentage points) short of her tally.

But everyone knows that Paul is a niche candidate. The 27.65 percent that he earned on Saturday is impressive, in that it speaks to the sizable and devoted following he has built, but it's also probably the same share he would have received if there'd only been two candidates on the ballot, instead of nine.

Bachmann's real competition was Tim Pawlenty, the former Minnesota governor who had poured massive time and energy into the straw poll, hoping to post a breakthrough victory -- and to stave off an early elimination from the GOP race. As the stakes had crystallized for Pawlenty in the days leading up to the straw poll, he'd even gone on the attack against Bachmann in a desperate effort to peel support from her. Saturday's results demonstrated forcefully just how futile Pawlenty's strategy was: He finished a very distant third, with just 13.57 percent, winning fewer than half as many votes as Bachmann.

In other words, this was a very big win for Bachmann. She crushed her biggest mainstream competitor and she avoided the indignity of finishing behind Paul. In the run-up to the straw poll, there was talk that she might be a victim of her own early success -- that by making so much noise this spring and summer and moving up so quickly in polling she had set the bar too high for herself. Finishing behind Pawlenty (and Paul, for that matter) would have encouraged this view, raising questions about whether Bachmann really had the staying power and organization to win the Iowa caucuses this winter. But now she'll leave Ames with the political world taking her more seriously, not less.

And her victory was doubly significant in light of the day's other major political development: Rick Perry's formal entry into the GOP race. The Texas governor made his long-expected announcement early in the afternoon at a conservative blogger conference in South Carolina. Perry is a heavyweight candidate, to be sure, and enters with considerable momentum. But he would have even more momentum right now if his announcement had been followed hours later by news of an unexpectedly weak straw poll showing for Bachmann -- a development that would have created the immediate possibility of defections of Bachmann supporters to Perry's side. Perry, after all, is supposedly Bachmann's worst nightmare -- someone who appeals to the same rigidly conservative base she does, but who is far more acceptable to the party's establishment. Perry may yet end up taking the wind out of Bachmann's sails, but the straw poll outcome suggests that she'll put up a whale of a fight.

Thus, the stage is a set for a fascinating battle for the loyalties of the "purist" wing of the party between Perry and Bachmann. Which is very good news for the other major candidate in the race, Mitt Romney, who has also stood to lose by Perry's emergence. The threat to Romney is that Perry might marginalize Bachmann and gobble up most of her support and that the GOP establishment will then rally around him, judging him to be a safe enough choice and more acceptable to the base than Romney. So the longer Perry is tied down in a fight with Bachmann for the true believer vote, the better Romney has to feel.

And no doubt Perry himself would much rather focus his attention on Romney, whose ideological credentials have long been in doubt and who would be relatively easy to run against from the right. But trying to convince Bachmann supporters to abandon her is far trickier -- especially now that the straw poll results have lifted their spirits to the stratosphere.

So if you're keeping score at home, Saturday was a very good day for Bachmann, and a decent one for Romney. And it wasn't bad for Perry, either, although he would have preferred to see Bachmann lose the straw poll. It was, however, a dreadful day for Pawlenty, who's now pretty much run out of time to demonstrate that a candidacy that makes sense on paper is remotely interesting to Republican activists.