Despite budget woes, the military is preparing for a conflict with our biggest rival -- and we should be worried 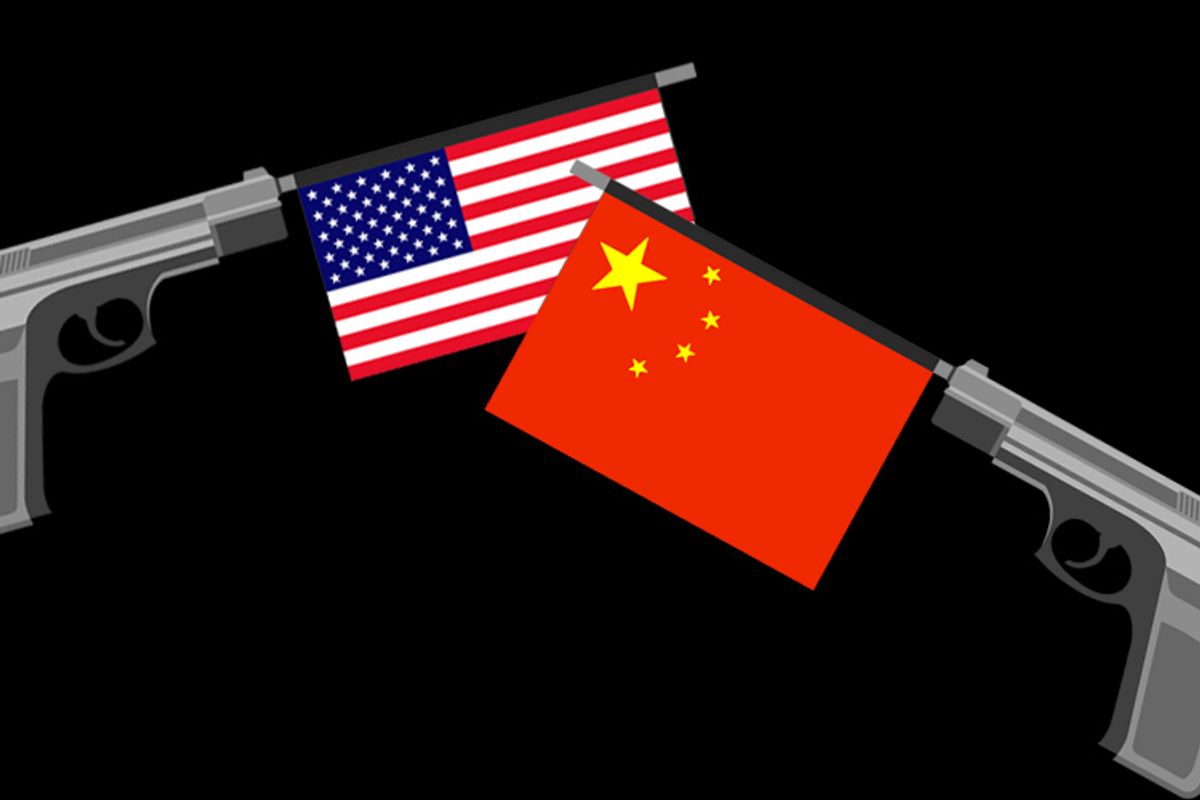 This summer, despite America’s continuing financial crisis, the Pentagon is effectively considering trading two military quagmires for the possibility of a third. Reducing its commitments in Iraq and Afghanistan as it refocuses on Asia, Washington is not so much withdrawing forces from the Persian Gulf as it is redeploying them for a prospective war with its largest creditor, China.

According to the defense trade press, Pentagon officials are seeking ways to adapt a concept known as AirSea Battle specifically for China, debunking rote claims from Washington that it has no plans to thwart its emerging Asian rival. A recent article in Inside the Pentagon reported that a small group of U.S. Navy officers known as the China Integration Team "is hard at work applying the lessons of [AirSea Battle] to a potential conflict with China."

AirSea Battle, developed in the early 1990s and most recently codified in a 2009 Navy-Air Force classified memo, is a vehicle for conforming U.S. military power to address asymmetrical threats in the Western Pacific and the Persian Gulf -- code for China and Iran. (This alone raises a crucial point: If the U.S. has had nothing but trouble with asymmetrical warfare for the last 45 years, why should a war with China, or Iran for that matter, be any different?) It complements the 1992 Defense Planning Guidance, a government white paper that precluded the rise of any "peer competitor" that might challenge U.S. dominance worldwide. The Planning Guidance is the Pentagon’s writ for control of what defense planners call "the global commons," a euphemism for the seaways, land bridges and air corridors that are the arteries of international commerce. For a foreign power to challenge this American dominion is to effectively declare war on the United States, and that is exactly what China appears to be doing in the South China Sea, a resource-rich and highly contested waterway in Southeast Asia.

It was in this spirit that Marine Corps Commandant Gen. Jim Amos, at a dinner hosted by the Center for a New American Security in late May, remarked that the wars in the Persian Gulf were denying Washington the resources it needed to cope with an increasingly assertive China. "We’d like to turn that around," he said. "I don't think we're there to [the extent] we need to be." In his candor, Amos became the latest U.S. military leader to speak about his service’s plans following the Afghanistan drawdown.

A U.S. mobilization in Asia is well underway, in faith with a spring 2001 Pentagon study called "Asia 2025," which identified China as a "persistent competitor of the United States," bent on "foreign military adventurism." Three years later, the U.S. government went public with a plan that called for a new chain of bases in Central Asia and the Middle East, in part to box in the People’s Republic. Similarly, the nuclear energy cooperation deal signed by the U.S. and India in 2008 was an obvious containment maneuver aimed at Beijing. In late March, press reports detailed a major buildup of American forces in Asia, including increased naval deployments and expansive cooperation with partner countries. Meanwhile, the Pentagon is forging ahead with a multi-year effort to transform Guam into its primary hub in the Pacific, an initiative so vast that John Pike of the Washington, D.C.-based GlobalSecurity.org has speculated that Washington wants to "run the planet from Guam and Diego Garcia by 2015."

Unlike America’s allies in Asia and Europe, however, China is not about to outsource its national security obligations to a foreign power, particularly when it comes to the South China Sea. There more than ever, and not without reason, Beijing identifies the U.S. not as a strategic partner but as an outright threat. In 2007, when China destroyed one of its weather satellites with a ballistic missile, it served as a warning to Washington after the ramming six years earlier of a U.S. spy plane by a Chinese fighter jet off the coast of Hainan Island. Though the crisis that followed was defused diplomatically, it was interpreted by some in Washington as vindication of the throaty Asia 2025. In fact, the clash followed a dramatic rise in the frequency of U.S. overflights in the area during the twilight of the Clinton years, which triggered a demarche from Beijing that slipped through the cracks of the transition to the Bush administration. The Hainan incident, as affair is known, was the inevitable outcome of a highly intrusive American surveillance regime.

In addition to China, Vietnam, Brunei, Taiwan, Malaysia and the Philippines all have competing claims on several clusters of South China Sea islands. Rather than intervening with quiet diplomacy to untangle this incendiary thicket, the U.S. has starkly sided against Beijing. In March 2010, when a Chinese official was quoted by Japanese media as identifying the region as a "core interest" of Chinese sovereignty, the White House retaliated by declaring that freedom of maritime navigation is a U.S. "national interest." As it turns out, according to the China scholars Nong Hong and Wenran Jiang, writing in the July 1 edition of the Washington-based Jamestown Foundation’s China bulletin, the core interest to which the official referred was “the peaceful resolution” of the disputes in question. Despite this, the White House refuses to climb down. Two weeks ago, three U.S. Navy ships paid call on Vietnam, China’s ancient antagonist, for a weeklong joint exercise at a time of strained relations between Beijing and Hanoi, prompting a formal protest from the Chinese. In Manila last month, Secretary of State Hillary Clinton pointedly assured her hosts that the U.S. would honor its mutual defense pact with the Philippines and sell it new weaponry on discounted terms.

For the first time since the end of the Cold War, the U.S. government has encountered the practical limits of the 1992 Defense Planning Guidance. In its story about AirSea Battle and the China Integration Team, Inside the Pentagon revealed an oblique, if profound insight from Andrew Krepinevich, the highly regarded head of Washington’s Center for Strategic and Budgetary Assessments. China, he said, is clearly jousting for control of the Western Pacific and "we have to decide whether we’re going to compete or not. If we’re not, then we have to be willing to accept the shift in the military balance." Otherwise, "the question is how to compete effectively."

Here is a noble appeal for Washington to match its commitments with the resources needed to sustain them, the absence of which has fueled the debt crisis that nearly reduced the United States to a mendicant state. Such are the crippling costs of a defense policy that makes global hegemony a mindless imperative.

Stephen Glain is a freelance writer with extensive experience as a foreign correspondent in Asia and the Middle East. He has written for the New Republic, the Atlantic Monthly, the Nation, the Wall Street Journal and many other publications. His latest book, "State vs. Defense: The Battle to Define America’s Empire," is just out from Crown. You can follow him on Twitter @sglain.