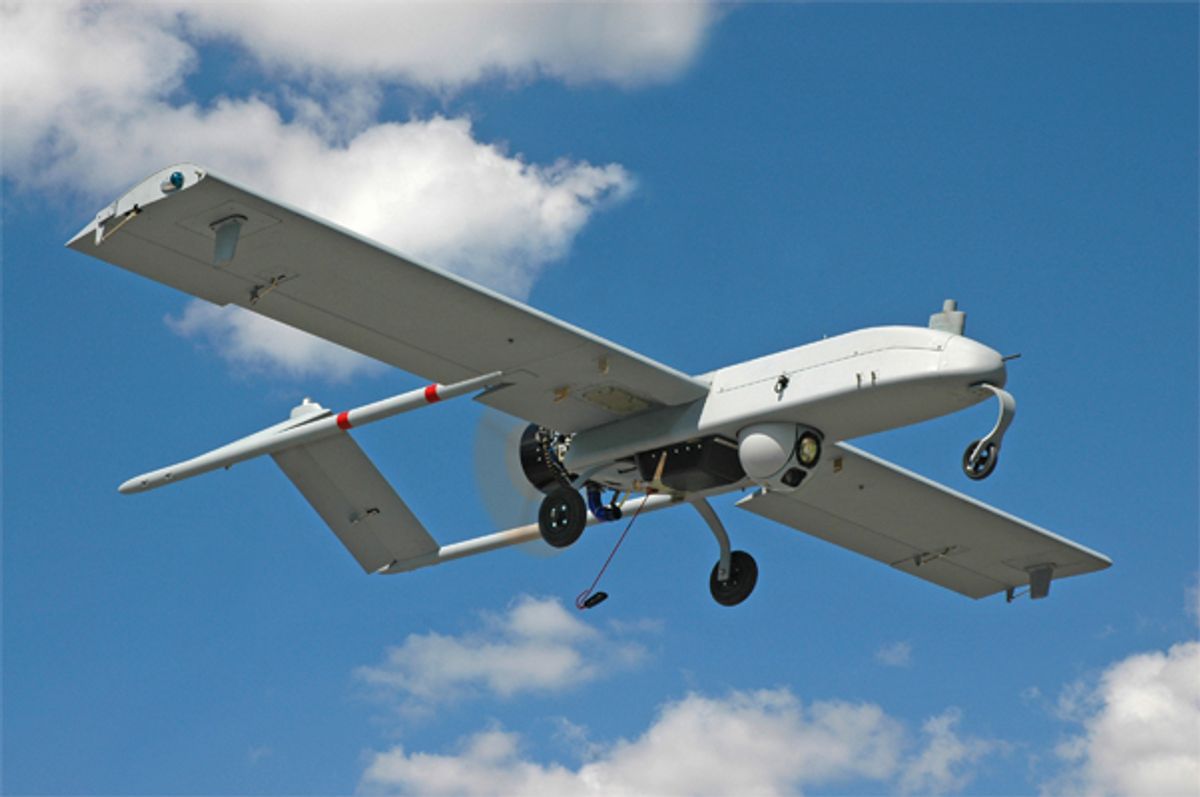 Two weeks ago, President Obama's former Director of National Intelligence, Adm. Dennis Blair, excoriated the White House for its reliance on drones in multiple Muslim nations, pointing out, as Politico put it, that those attacks "are fueling anti-American sentiment and undercutting reform efforts in those countries."  Blair said: "we’re alienating the countries concerned, because we’re treating countries just as places where we go attack groups that threaten us."  Blair has an Op-Ed today in The New York Times making a similar argument with a focus on Pakistan, though he uses a conspicuously strange point to make his case:

Qaeda officials who are killed by drones will be replaced. The group's structure will survive and it will still be able to inspire, finance and train individuals and teams to kill Americans. Drone strikes hinder Qaeda fighters while they move and hide, but they can endure the attacks and continue to function.

Moreover, as the drone campaign wears on, hatred of America is increasing in Pakistan. American officials may praise the precision of the drone attacks. But in Pakistan, news media accounts of heavy civilian casualties are widely believed. Our reliance on high-tech strikes that pose no risk to our soldiers is bitterly resented in a country that cannot duplicate such feats of warfare without cost to its own troops.

Though he obviously knows the answer, Blair does not say whether this widespread Pakistani perception about civilian casualties is based in fact; if anything, he insinuates that this "belief" is grounded in the much-discussed affection which Pakistanis allegedly harbor for fabricated anti-American conspiracy theories.  While the Pakistani perception is significant unto itself regardless of whether it's accurate -- the belief about drones is what fuels anti-American hatred -- it's nonetheless bizarre to mount an anti-drone argument while relegating the impact of civilian deaths to mere "belief," all while avoiding informing readers what the actual reality is.  Discussions of the innocent victims of American military violence is one of the great taboos in establishment circles; that Blair goes so far out of his way to avoid discussing it highlights how potent that taboo is.

Last month, I interviewed Chris Woods of the Bureau of Investigative Journalism, which had just published a report conclusively documenting the falsity of John Brennan's public claim that "in the last year, 'there hasn't been a single collateral death'" from U.S. drone attacks.  Last week, the Bureau published an even more detailed report focusing on the number of Pakistani children killed by American drone attacks:

The Bureau has identified credible reports of 168 children killed in seven years of CIA drone strikes in Pakistan’s tribal areas. These children would account for 44% of the minimum figure of 385 civilians reported killed by the attacks. . . .

The highest number of child deaths occurred during the Bush presidency, with 112 children reportedly killed. More than a third of all Bush drone strikes appear to have resulted in the deaths of children. . . . President Obama, too, has been as Commander-in-Chief responsible for many child deaths in Pakistan. The Bureau has identified 56 children reported killed in drone strikes during his presidency . . . .

The report indicates that the number of Pakistani children dying from drone attacks has decreased substantially over the past several months -- since September, 2010, when one man's son, two daughters and nephew were all killed by a single U.S. strike -- but such deaths nonetheless continue (including one in April of this year, in which a 12-year-old boy, Atif, was killed).  These facts make John Brennan's blatant lie particularly disgusting: it's one thing to kill children using remote-controlled weaponized air robots in a country in which we're not formally at war, but it's another thing entirely to stand up in public and deny that it is happening.

In several ways, the Bureau's study significantly understates the extent of U.S.-caused civilian deaths in the region.  As Woods told me, the Bureau uses such a rigorous methodology -- counting civilian deaths only when they can be definitively confirmed up to and including the victims' names -- that some deaths almost certainly go uncounted in the notoriously inaccessible Waziristan region.  Other credible reports provide an even starker assessment of the number of innocents killed.  Moreover, this latest report from the Bureau counts only child deaths, not those of innocent adult men and women in Pakistan, nor does it discuss the large number of civilian deaths from drones outside of Pakistan (Yemen, Libya, Somalia, Afghanistan, Iraq), nor the U.S.-caused deaths of civilians from means other than drones (such as the "amazing number" of innocents killed at checkpoints in Afghanistan).

Adm. Blair's Op-Ed may have had a much greater impact had it included a discussion of these facts, rather than implying that the problem with American drone attacks is Pakistani paranoia.  That's precisely why the Op-Ed -- like most discussions in establishment venues of this topic -- didn't include those facts.

Thanks so much to Yves Smith, Maz Hussain, and Mark Adomanis for providing such stimulating and enlightening discussions during my absence last week.  Filling in for a writer is not easy, as I learned when I did it for Digby way back in early 2006, very soon after I began writing about politics.  You try to maintain your own voice and focus while realizing that you're writing for someone else's readership with its own pre-existing set of interests and expectations.  All three did a superb job of balancing those considerations and it made my week off more enjoyable knowing that excellent content was being provided.  You can continue reading Yves at her Naked Capitalism blog, Maz on his blog and on Twitter, and Mark on his Forbes blog and on Twitter.