These are the choices the GOP is stuck with

The Wall Street Journal begs for someone, anyone to rescue the party from Mitt, Rick and Michele 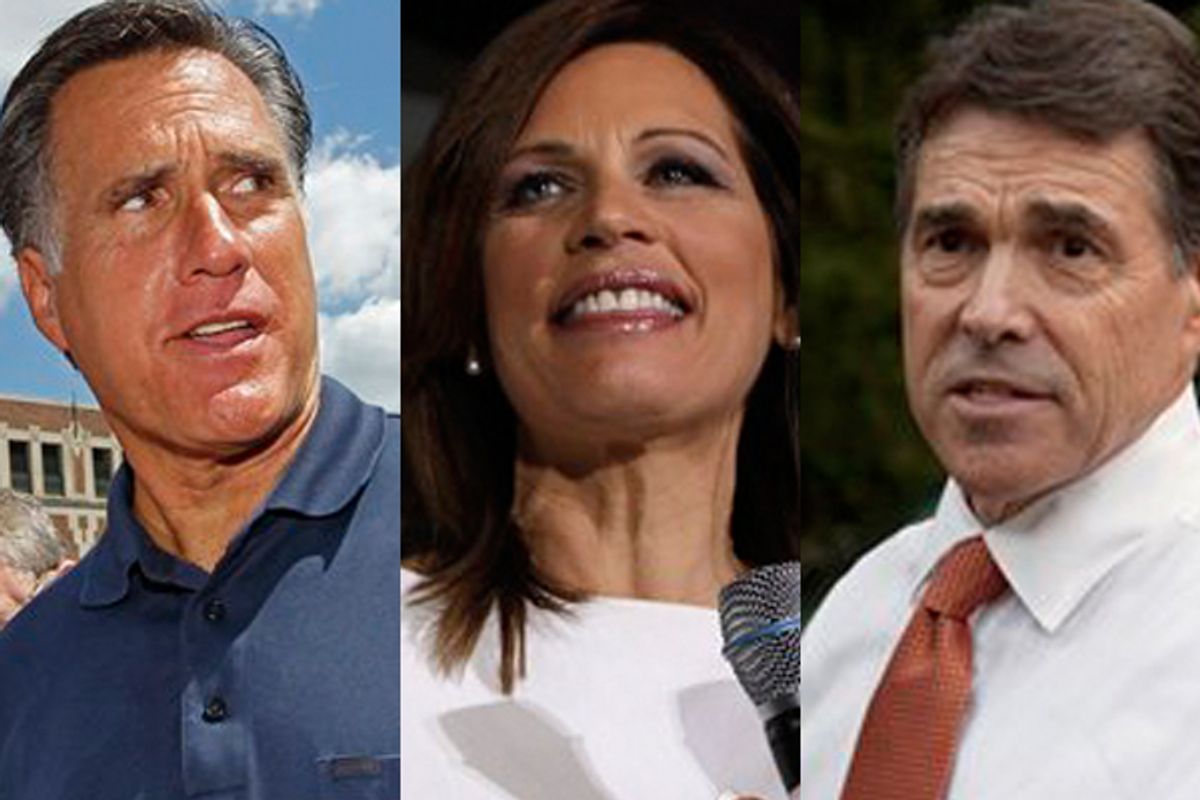 Rupert Murdoch's Wall Street Journal plays a major role in shaping and driving the political conversation on the right. Republican Party leaders and activists and other conservative media outlets frequently take their cues from the Journal's editorial page, amplifying the ideas and attitudes the paper embraces. What is the paper's opinion one day can quickly become mass opinion on the right.

This is why the Journal's lead editorial today is worth paying close attention to. It comes after an eventful weekend in the GOP presidential race, one that clearly defined the race as a three-way competition between Mitt Romney, Rick Perry and Michele Bachmann. The Journal, though, isn't exactly impressed with any of them. When it comes to Bachmann, the editorial is at its most scathing:

Mrs. Bachmann has a record of errant statements (see Battle of Lexington and Concord, history of) that are forgiven by Fox Nation but won't be if she makes them as a GOP standard-bearer.

More substantively, her attempt to position herself at all times as the anti-establishment outsider has made her seem on occasion less principled than opportunistic.

And there's this about Perry:

The questions about Mr. Perry concern how well his Lone Star swagger will sell in the suburbs of Ohio, Wisconsin and Pennsylvania, where the election is likely to be decided. He can sound more Texas than Jerry Jones, George W. Bush and Sam Houston combined, and his muscular religiosity also may not play well at a time when the economy has eclipsed culture as the main voter concern.

And then there's Mitt:

Mr. Romney is a weak front-runner who has money and campaign experience and looks Presidential. But he gives little evidence that he has convictions beyond faith in his own technocratic expertise.

Republicans and independents are desperate to find a candidate who can appeal across the party's disparate factions and offer a vision of how to constrain a runaway government and revive America's once-great private economy. If the current field isn't up to that, perhaps someone still off the field will step in and run. Now would be the time.

It may seem surprising that the Journal, which has happily contributed to Bachmann's right-wing stardom, would offer such an unsparing critique of the Minnesota congresswoman. But really, this has been inevitable as her poll numbers have grown. The GOP establishment is happy to have a charismatic ideologue like Bachmann firing up the masses, but they don't want her coming too close to their presidential nomination. And while there's still little chance that she'll be the nominee, now that Bachmann has won the straw poll, establishment organs like the Journal are less willing to take chances. If her prospects don't decline in the weeks and months ahead -- or if they even improve -- look for the establishment to turn up the heat even more, with arguments like the ones the Journal is now making.

Much more notable are the paper's harsh words for Perry. The promise of his campaign is that (supposedly) he combines Bachmann's devout conservatism with Romney's general election viability -- that he can unite the purity-yearning base with the more pragmatic establishment. And by most measures, he had a very good debut weekend, following up his Saturday candidacy announcement with a well-received speech to a county GOP event in Iowa Sunday night (at which he upstaged Bachmann). But instead of getting on board, the Journal is openly questioning his viability, a sign that winning over the establishment may be tougher for Perry than many had assumed, especially as his Texas paper trail is further scrutinized by the media.

The Journal's call for a new candidate is almost certain to go unanswered, mainly because there just aren't any options. Chris Christie has certainly been worth watching, but especially in the wake of his recent health scare, there's less reason than ever to think he might be persuaded to run -- especially when you consider his delicate reelection situation in New Jersey. Nor are there real  signs, his own recent Journal Op-Ed notwithstanding, that Jeb Bush might suddenly jump in. And surely Sarah Palin isn't the white knight the Journal has in mind. Besides these names, who else is even on the radar?

So that's it: This is probably the field the GOP is stuck with -- Romney and Perry as the heavyweights and Bachmann as the very, very long shot. And in that sense, Romney should probably feel good about the Journal's editorial: He's the only candidate whose general election credentials the paper didn't disparage. If this is the three-way race the GOP is stuck with, the Journal and the rest of the establishment may well decide that Romney is their best bet.