What if Anonymous targeted you?

The "data dump" is hacking's new frontier. But this weapon against official secrets affects individuals, too 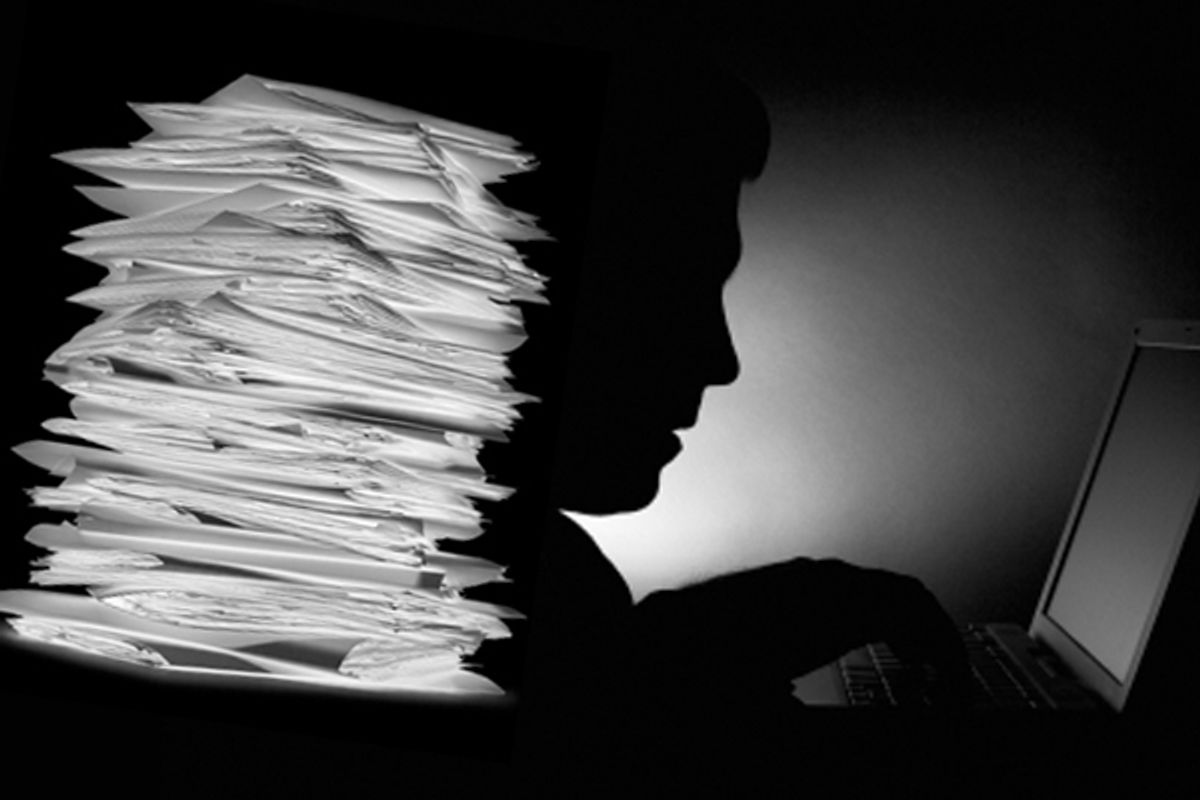 As new technologies emerge, the hacker subculture evolves with them -- as it has with the "big data dump," where a single individual or group of hackers uncovers a massive amount of information and makes it public.

The two most prominent examples, of course, are the cases of the collective Anonymous releasing more than 10 gigabytes of data from local sheriffs' departments last week and WikiLeaks, specifically Julian Assange's publication of more than 250,000 U.S. diplomatic cables in November 2010.

It appears to be a new movement -- releasing huge collections of sensitive data with the goal of rendering government actions transparent to the public, or simply in retaliation for a policy the hackers disagree with. On Sunday, Anonymous hacked into computers for the San Francisco metro service Bay Area Rapid Transit and released personal data belonging to more than 2,000 customers. That was in response to BART shutting down mobile phone service on trains one day last week to prevent protesters from organizing. (Don't blame us, Anonymous said. Blame BART for not keeping the information hack-proof.)

These data dumps will have long-term effects on democracy, journalism and politics. But while leaks may be nothing new in principle, the pure size of these reveal deeper truths about how we understand technology in our everyday lives -- now and in the future.

After all, as soon as we had secrets, we had hackers. And as soon as we had hackers, we had people who delighted in using secrets to embarrass people in power -- or simply to report on what they are doing. Any veteran journalist will tell you that the profession is driven by leaks. And if you look at the history of communication technology, in works such as David Kahn's "The Codebreakers" or Tom Standage's "The Victorian Internet," it's clear that the questions being debated here are the same ones that have been with us since Roman legions started scrambling messages to encrypt battlefield orders.

What is new, however, is the scale of both the amount of information released and the mechanism for distribution. Making a quarter of a million documents public, in the case of WikiLeaks, is significantly different than intercepting a few telegrams and leaking them to reporters -- or sharing the inside scoop with reporters over drinks at a D.C. watering hole. The magnitude is startling

It is tempting to see this new movement as a realization of the promise of technology -- and in some ways, that may well be true. In the early 1980s, the hackers driving the technological revolution adopted the mantra "Information Wants to Be Free." Big data dumps may well serve as an object lesson in that regard. But there are two other issues that I believe are part of the general context of our technology and information culture -- and they make what's happening with these big data dumps much more concerning than if this was just as simple as the scaling up of old-school hacking.

First, with the rise of social networking sites such as Facebook -- and as we become increasingly public with our representation of ourselves -- our culture seems to be losing the ability to distinguish between two very different concepts: privacy and secrecy. Privacy is based on the idea that we have a right to selectively reveal ourselves to the world. No one has a right to information that is private; the individual may choose to reveal it or not reveal it as he or she sees fit. Secrecy is information that another party has a reasonable expectation to know based on a shared interest or relationship.

In the age of big data dumps, the lines start to get blurry and sometimes confused. What happens when something private is exposed publicly? What happens when we stop thinking of information as private and start considering it secret? "Exposing secrets" has a noble ring to it that "invading privacy" seems to lack

What ought to concern us is that Facebook -- or any other large-scale data collection platform -- can be read as just another big data dump. Take the case of Carter Jernigan and Behram Mistree, two MIT students who were able to write a program (nicknamed "Gaydar") that scanned Facebook profiles and was able to accurately predict the sexual orientation of users by scanning their friends' gender and sexuality, even when their profiles were set to private and did not list their sexual orientation. At what point does our public presentation of ourselves forfeit our right to privacy?

The second issue that we face in a world of big data dumps is that we are no longer living in a world of just "content." For the greater part of human history, our news and information came to us from either a single source or a limited number of sources. We have always lived in a filtered and edited world. The mission of the press has been to filter the news of the world and offer it to us in digestible portions. Today, we live in a world of aggregation and context.

WikiLeaks and other big data dumps present us with an unfiltered, unedited world of context, not content. And it is a world that is shaped not by one or two news sources but by a barrage of 24-hour cable-news networks, websites, wikis and forums offering perspectives from all parts of the political spectrum. We live in a world where we can only truly decipher content by first reading the context that surrounds it.

In that sense, these big data dumps are not content, but context dumps. They provide a flood of context, offering the promise of a nugget or two of relevant content -- if you have the tools, time or algorithms to find it. As the MIT students' "Gaydar" project eloquently demonstrated, sometimes we don't need content at all; the context can tell us all we need to know if we have the right code. And sometimes the context isn't there at all -- just ask the BART riders who found their personal account information suddenly online.

As big data dumps are only likely to increase, we need to guard the line between what is and should be private, and what kinds of secrets can and should be exposed. We have placed our lives online -- our private lives, our secret lives and our public lives. And as we find ourselves mired more and more in a world of context, we must all pay careful attention not only to what is being revealed, but also to the climate it creates for what we'd prefer to hold close.

Douglas Thomas, the author of "Hacker Culture," is an associate professor in the Annenberg School for Communication at the University of Southern California, and the founding editor of the Games & Culture journal.