From planking to "Bed Intruder," viral references find a way into rap and make even the silliest trends cool 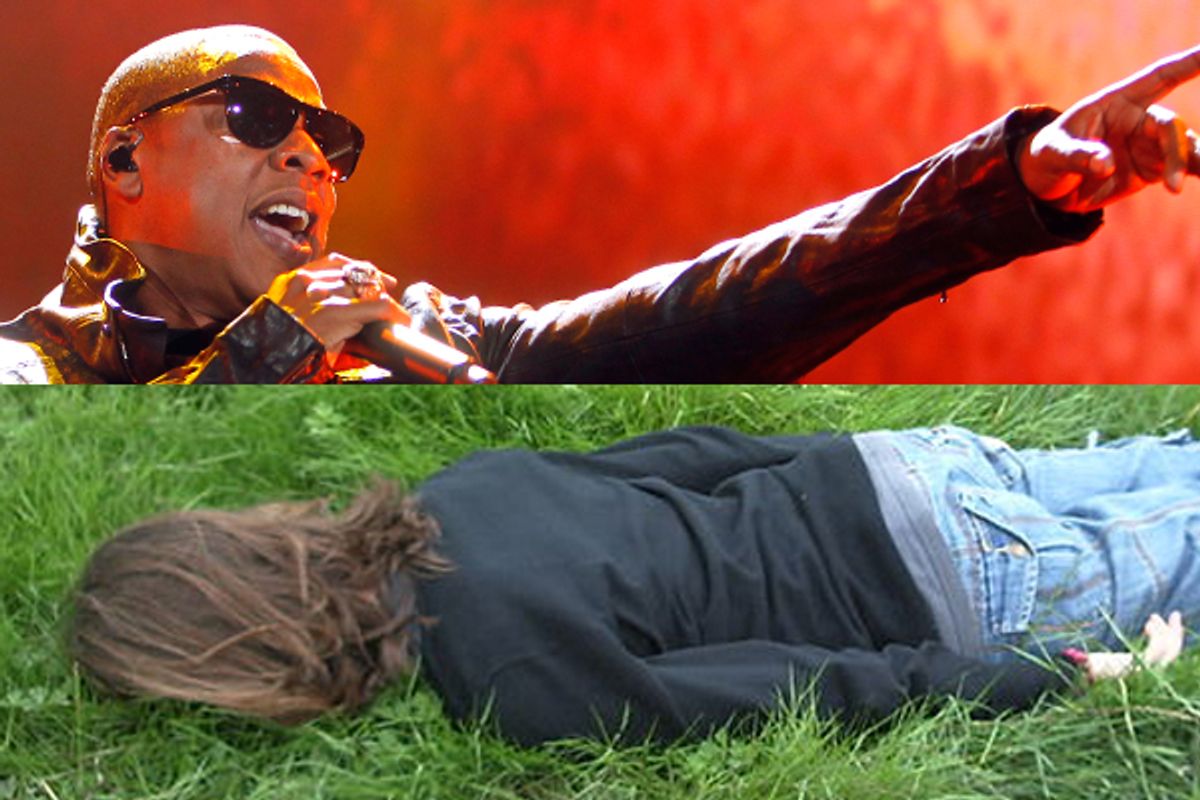 Jay-Z rapping about the Internet trend known as planking in "Watch the Throne."
--

On their new album "Watch the Throne," Jay-Z's verse on Kanye West's song "Gotta Have It" features an interesting set of rhymes: "I wish I could give you this feeling, I'm planking on a million/I'm riding through yo' hood, you can bank I ain't got no ceiling."

Leaving aside the reference to the debt ceiling ... did Jay-Z just give a shout-out to the Internet phenomenon known as planking? What is Jigga doing rapping about memes?

It's hard to take the line as just another pop culture reference, because planking -- a game where you lie face-down, rigidly, in an odd location and someone takes a picture of you to post online -- belongs entirely to the world of Web geeks. It's the equivalent of putting "All your base are belong to us" or "Keyboard Cat" lyrics in your hip-hop track. Which, as it turns out, wouldn't be all that unlikely, either. The crossover between Web memes and rap music actually has a long history, stretching back to the birth of both genres.

Chris Weingarten, Village Voice writer and author of the 33 1/3 music series book "Public Enemy's It Takes a Nation of Millions to Hold Us Back," spoke to me earlier today about this trend:

The idea of memes in hip-hop is as old as rap itself, in the sense that rap is all about repurposing things in the ether. Rap songs are all about listening to what other people are saying. The very first year of recorded hip-hop music, 1979, you have multiple songs that use the break from "Good Times." It was kind of a race to get the first rap record out, and the SugarHill Gang's "Rapper's Delight" and Kurtis Blow's "Christmas Rappin'" both used that same instrumental piece from the "Good Times" theme. It was a meme in that sense, that it was in the cultural atmosphere and everyone was trying to rap over it.

As rap records came out more and more, every year people would try to refurbish the things in pop culture, whether that was Chuck D. saying, "Don't Worry Be Happy," or Juvenile saying, "Run Forest Run."

Now rappers can work at the speed of the Internet, and it's really accelerated the process of making songs that can include culturally relevant material, like memes.

These references are indeed speeding up: When "General" Larry Platt auditioned for "American Idol" to protest sagging jeans on an episode that aired Jan. 13, 2010, his terrible/awesome original number "Pants on the Ground" became an overnight meme.

By Jan. 29, rapper Bun B. came out with a single of the same title, which sampled Platt's audition:

Memes can also make rap songs seem more relevant. In T.I.'s 2008 hit "Live Your Life," the Rihanna chorus samples Moldovan pop band O-Zone's song "Dragostea din tei." The song is better known under another title, thanks to a viral video from 2006 starring a man named Gary Brolsma, or the "The Numa Numa Guy."

Although Gary didn't actually create the O-Zone song, he did make it into a meme -- so much so that people believe the pop number is actually called "Numa Numa." And while the original Numa Numa Guy video currently has 43 million hits on YouTube, T.I.'s video has only a little over 17 million.

A more recent example, cited by Weingarten, would be off Tyler the Creator's latest album. In the song "She," Frank Ocean makes a lyrical homage to Antoine Dodson's "Bed Intruder" meme/viral video when he raps, "Ooh, hide your daughters, hide your sisters, hell hide grandmama too/Cause the fisherman's raping everybody in the pool, he on the loose, yeah."

Sometimes the rappers themselves are born as Internet stars. As Don Caldwell from Know Your Meme pointed out, Internet "stars" like 50 Tyson and Eli Porter have become figures in the rap community scene because their attempts at spitting rhymes were so terrible that they went viral. Now both are embraced as semi-legitimized rappers.

Which reminds me: "Watch the Throne" has one other reference to a meme star. In "H.A.M," Kanye drops the line, "Like Eli I did it, jokes on you muthaf-cker and I get it." That would be the same  Eli Porter, who failed so miserably at a high school rap battle that he became famous enough to warrant a documentary about his life. Now immortalized in a Kanye West song, Eli has done it. And so has the Internet, which has managed to take even the dorkiest people and trends and elevate them to the coolest status symbol out there: fodder for a Jay-Z or Kanye West song.